Is the ECB behind the curve? Here's what to expect in 2022 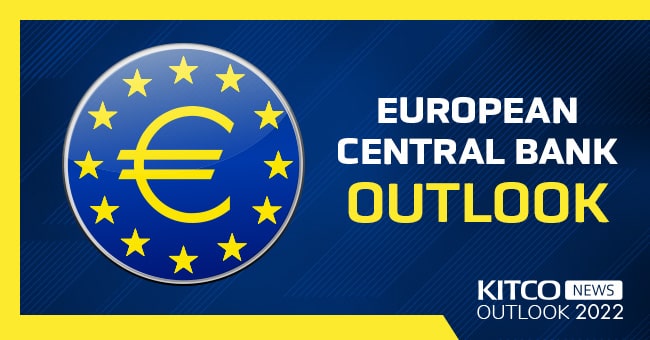 (Kitco News) - The ECB seemed to have backed themselves into a corner for 2022. In comparison to some of the other central banks, the ECB is slightly behind the curve, but there is some justification. Inflation is one of the biggest concerns for the ECB.

The bank's target is 2%, and year-on-year inflation in the Eurozone currently stands at increased to 4.9% in November of 2021 from 4.1% in October, the highest reading since July of 1991.

Many Analysts and ECB members are expecting the rate to fall back towards the 2% target but have admitted that it could take longer than expected. ECB Vice President Luis de Guindos recently noted: "We are fully convinced that inflation will start to decline at the beginning of next year (2022) and in the second half of next year inflation will start to decelerate even more and will converge with our target of 2%."

Looking at the FX implications, it's hard to see this happening while the EUR/USD exchange rate is as weak. The pair is currently trading around 1.1325, but in May 2021 the pair was trading at 1.2266. As we know, most commodities settlements are paid in USD, so unless there is some evening out or moderation in the trend, it could be hard to see the inflation rate moderating towards the 2% target.

On the plus side, the omicron COVID-19 variant seems to have less of a strain on the hospitals despite being more transmissible. Data seems to show that despite a higher infection rate, the death rate has moderated compared to previous strains of the illness.

This could mean that there could be fewer refinery closures and production issues. This would be good for the ECB as price increases could moderate as predicted. One massive variable is that more COVID-19 strains could come to light, which would throw a spanner in the works as supply disruptions could add to price pressures.

French investment bank Natixis said: "Inflation is forecast to be lower than 2% in 2023. But it is important to watch out for any shock that could push up inflation in 2023: Social crisis and demands leading to faster wage growth, bearing in mind that wage earners' purchasing power has fallen in 2021; Geopolitical crisis, for example between Europe and Russia, leading to a further sharp rise in European natural gas prices; A flare-up of the health crisis, causing bottlenecks to reappear, particularly in transport."

So a reduction in QE could be the action the bank could use. There have already been increments in the speed of the purchases in reaction to data last year. The euro initially rallied after the ECB announced it would end its pandemic emergency purchase program, as scheduled, in March. However, the ECB added that it would temporarily boost the size of its longer-running Asset Purchase Program (APP), in the second quarter, partially offsetting the reduction while retaining flexibility. The ECB gave no end date to the APP.

In 2022, the APP will become a point of focus, but rates are not likely to change unless there is a shock event. ECB's de Cos confirmed this with some recent comments as he noted: "There are no conditions to raise rates in 2022." He added that he supports the decision to end the pandemic stimuli but wants to "ensure that monetary policy will continue to be expansionary."

What analysts must consider is that if the Fed is more hawkish than expected, the ECB may be forced to act. If the Fed continues to taper and raise rates in 2022, the inflation target could be harder to meet for the ECB. This then could induce a response from the European Central Bank and balance out the exchange rate by putting pressure on the central bank's willingness to react.