A people's Fed? It's starting to at least look that way

SAN FRANCISCO, Jan 12 (Reuters) - Seven years ago white men made up the majority of directors on the boards of all but one of the 12 U.S. Federal Reserve banks. This year, white men are for the first time in the minority at every one.

Of the 105 directors on the newly named 2022 boards, 44% are women, and a record 40% are Black, Hispanic, or otherwise nonwhite, a Reuters review found. Board chairs and vice chairs were for the first time both majority female and majority people of color, and also for the first time included two labor leaders. 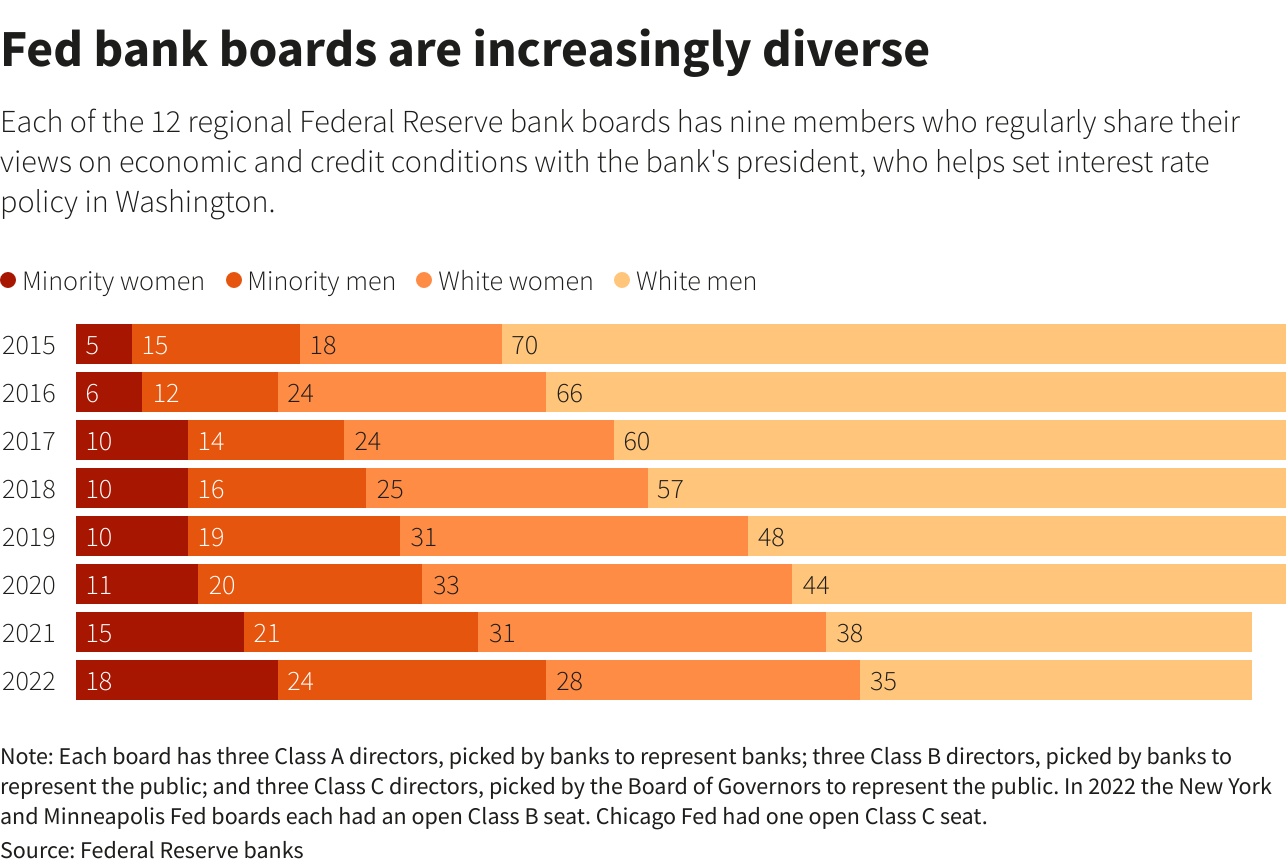 The changing face of the Fed's directors comes at a critical juncture for the U.S. economy, with raging inflation and slowing jobs growth creating hardship for families particularly of lesser means.

And it's a critical moment for the institution responsible for steering the nation's monetary policy response: a third of Fed banks will need new presidents over the next year or so.

Among the influential subgroup of directors eligible to pick new Fed bank presidents who in turn set interest rates for the nation, a majority are women for the second year running, and a majority are people of color for the first time, Reuters data shows.

The Dallas and Boston Fed are currently seeking replacements for two recently resigned presidents, both white men, with the Dallas Fed on Thursday holding a town hall to solicit public feedback on the search process.

The presidents of the Fed's reserve banks in Chicago and Kansas City, a white man and white woman respectively, will reach their mandatory retirement ages next January. Their boards are expected to begin searches in coming months.

Against that backdrop, those strides in diversity at the regional boards are a milestone for the Fed. For most of its 108 years, its leadership has not come close to reflecting the demographics of the country for which it is the most powerful force in economic policymaking.

The gains are the result of a years-long push by Fed officials to attract more women and minorities to serve on boards in order to better mirror the nation as a whole, build credibility in communities particularly vulnerable in economic downturns, and both promote better decisionmaking on policy and attract more diverse talent to senior Fed roles.

The Fed Board led by Powell, with five members currently, is all white with only two women, and the normally seven-seat panel has never had more than three female members serve at one time and just three Black members ever. While nominations expected by U.S. President Joe Biden as early as this week are seen changing the face of the Fed Board in Washington, the ranks of the regional bank presidents - half of whom are white and male - remain beyond the direct reach of presidential appointments.

Those choices are the purview of the regional bank boards, with input from and approval by the Fed Board.

At the regional level, the boards of the San Francisco Fed and the Philadelphia Fed are the least diverse: each of their boards is one-third women and one-third minority. Boston - whose presidential search is underway - Chicago - whose search is expected to begin later this year - and Cleveland have boards that are majority women. The Dallas Fed, which is also seeking a new chief, is the only bank with a majority of board members who are people of color. 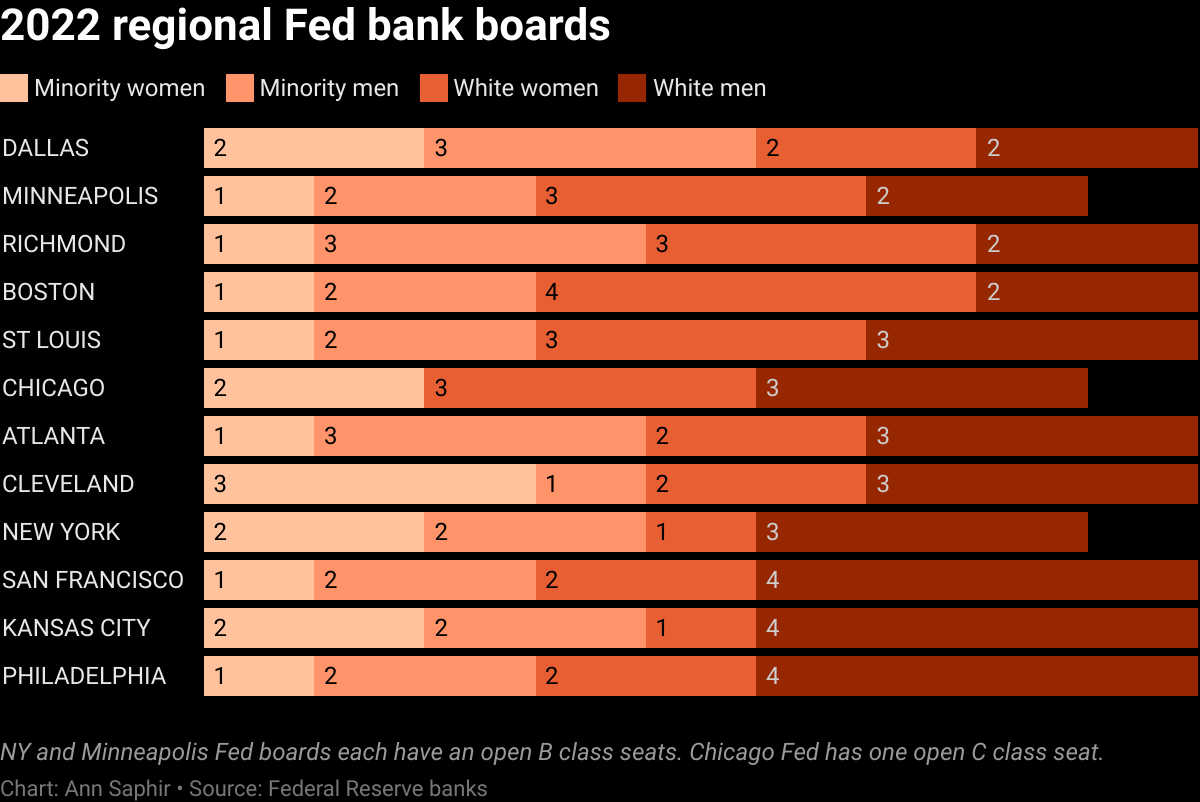 Diversity at the Fed bank boards is important, Fed bank presidents say, noting that having directors with different backgrounds offers important insight into the economy and the real-world effects of their policies.

"We make better policy when we have a diverse team," San Francisco Fed President Mary Daly said earlier this month at a Central Bank of Ireland event, echoing research that cuts across industries.

With regard to the Fed in particular, a study published in early January suggested diverse Fed bank boards strongly correlated with increased lending by local banks to lower-income neighborhoods.

And Fed leaders hope that having more diverse boards of directors at the regional Fed banks is a step towards getting a more diverse group of Fed presidents.

To be sure, it's no magic formula.

The Cleveland Fed, in 1988, was the last Fed bank to get a female director, data published by Brookings Institution shows, but the first, in 1982, to hire a woman president and three of the seven women ever to serve as Fed presidents led the Cleveland Fed.

The Minneapolis Fed's board was second to last to get a nonwhite director but has hired two of what has been only three ever nonwhite bank presidents.

"I do believe that going forward this will be much more important and the (board of directors) will be more cognizant of diversity, but it definitely doesn’t map one-to-one," said Kaleb Nygaard, senior research associate at the Yale Program on Financial Stability who along with Peter Conti Brown has been studying the Fed bank boards and is among those calling out the Fed for lack of diversity.

"Our country's central bank should be led by people that not only look like our diverse country, but also that have backgrounds that represent all areas of the economy," he said.

Reporting by Ann Saphir and Lindsay Dunsmuir; Editing by Andrea Ricci
Disclaimer: The views expressed in this article are those of the author and may not reflect those of Kitco Metals Inc. The author has made every effort to ensure accuracy of information provided; however, neither Kitco Metals Inc. nor the author can guarantee such accuracy. This article is strictly for informational purposes only. It is not a solicitation to make any exchange in commodities, securities or other financial instruments. Kitco Metals Inc. and the author of this article do not accept culpability for losses and/ or damages arising from the use of this publication.