LONDON, Jan 12 (Reuters) - The dollar steadied above almost two-month lows against its major peers on Wednesday, ahead of data expected to show a fresh surge in U.S inflation that could seal the case for an early rise in interest rates.

Federal Reserve Chair Jerome Powell on Tuesday gave no clear indication that the Fed was in a rush to speed up plans for tightening monetary policy, putting some downward pressure on the greenback which has benefited from U.S. rate-hike expectations in recent weeks.

And the currency started to nudge higher again as the December U.S. consumer price index (CPI), due out at 1330 GMT, loomed.

Headline U.S. CPI is forecast at a red-hot 7% on a year-on-year basis, which would be the highest annual CPI number since 1982. 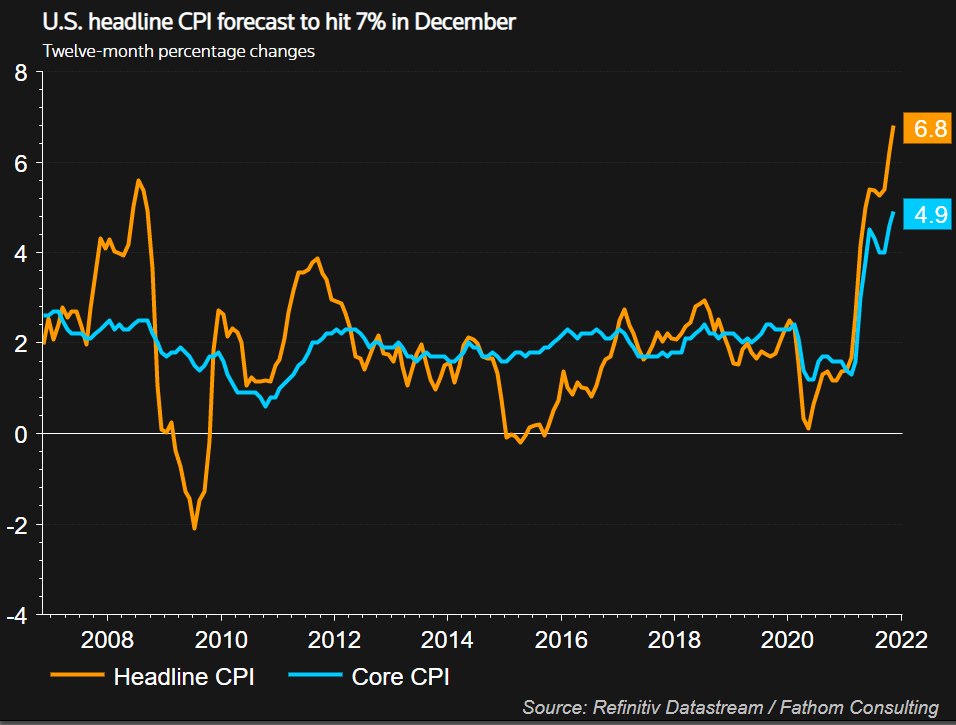 US CPI expected to hit 7%

ING currency strategist Francesco Pesole said since an inflation print above 7% is expected by markets, the immediate reaction in currency markets should be contained.

"At the same time, it should allow consolidation for a floor below the dollar in the near term – further cementing expectations for three Fed hikes and leaving the door open to speculate for four in 2022," Pesole said.

"We think this is a reason for markets to keep buying the dips in the dollar for the time being."

In a testimony at his renomination hearing on Tuesday, Fed chief Powell said the U.S. economy was ready for higher interest rates and a run-off of its asset holdings - dubbed quantitative tightening (QT) - to combat inflation.

But he said policymakers were still debating approaches to reducing the Fed's balance sheet, and that it could sometimes take two, three or four meetings to make such decisions. read more

Money markets currently price about 85% odds of a rates lift-off by March, and a total of at least three quarter-point hikes by year-end.

"So, it's unlikely we get an undershoot in the inflation data... and if it's as expected, there could be relief that it wasn't higher," she said.

The Australian dollar , often considered a liquid proxy for risk appetite, pulled back from almost one-week highs at $0.72230 as the dollar regained its footing.

But the greenback was stuck at two-month lows against the Canadian dollar at 1.25345 .

And sterling was steady having risen to $1.3645 for the first time since Nov. 4, bolstered by a view that the worst of the Omicron COVID surge maybe be passing in Britain - helping pave the way for another near-term rise in UK interest rates.

Reporting by Dhara Ranasinghe Editing by Mark Potter, Kirsten Donovan
Disclaimer: The views expressed in this article are those of the author and may not reflect those of Kitco Metals Inc. The author has made every effort to ensure accuracy of information provided; however, neither Kitco Metals Inc. nor the author can guarantee such accuracy. This article is strictly for informational purposes only. It is not a solicitation to make any exchange in commodities, securities or other financial instruments. Kitco Metals Inc. and the author of this article do not accept culpability for losses and/ or damages arising from the use of this publication.