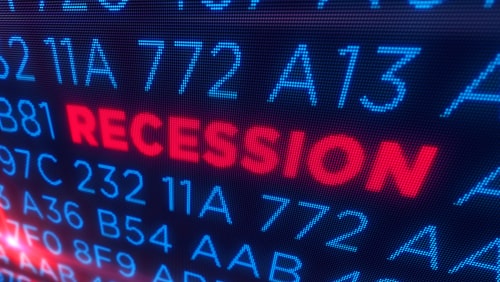 (Kitco News) As the Federal Reserve gears up to take on surging inflation, billionaire "Bond King" Jeffrey Gundlach says he is now on "recession watch."

The big red flag to watch in 2022 is how the economy reacts to tighter monetary policy in 2022, according to DoubleLine CEO Jeffrey Gundlach's Just Markets: 'I feel Young Again' webcast.

"Inflationary pressure is building," Gundlach said. "If we look at the economy … it's undeniable that's been supported by the quantitative easing and the Fed's balance sheet expansion. And since that's going away, it is just not plausible to think that we don't have more headwinds in 2022 for risk assets and, ultimately, for the economy. The signals from the bond market are starting to look a little bit like a pre-recessionary period."

Gundlach clarified that he is not calling for an imminent recession, but the U.S. consumer confidence and the yield curve data point to a potential slowdown. "We are going to be more on recession watch than we've been for the past two years," he said.

The word "recession" or "recessionary" was mentioned 16 times during Gundlach's webcast as he listed numerous warning signals to watch out for.

"It's getting to the point where the yield curve is starting to flash a weaker economy ahead," Gundlach said as he explained his analysis. "These are not recessionary yet, but similar to that consumer confidence, they are no longer sending a 'don't worry, be happy' signal. They're sending a 'start paying attention' signal. And we'll certainly be doing that as the year unfolds."

When looking at rising wage growth, the Fed does seem "pretty far behind the curve," which explains its latest hawkish shift. "It seems like every time [Fed Chair Jerome Powell] speaks, he's getting more and more hawkish about the potential need to raise interest rates," Gundlach pointed out.

How aggressive could the central bank be this year? Gundlach sees rates going up to 1.5% before the bear market and recession pressures start to weigh on the economy.

"When the next recession comes, the U.S. is going to have a challenge on its hands about what to do with the Fed funds rate, particularly if they have to reverse course at 1.5% or so, which may very well be the case," Gundlach stated.

Inflation will remain high throughout 2022, and it is going to be above what most people are pricing in, the DoubleLine CEO added.

"Economists think it's going to go back down to about 2.5% by the first quarter of 2023. That's a little bit of wishful thinking when we're starting up at around 7%," he said.

Gundlach cited the Citi Inflation Surprise Index. "Now we have an off-the-charts surprise of inflation globally. That has clearly been one of the impetus for Powell to so radically change his tone … saying that he's going to do almost whatever it takes to get inflation under control."

Outlook on gold and the U.S. dollar

However, in the near term, Gundlach is neutral until the gold market moves significantly. "We turned bullish on gold at $1,180 back in September 2018. And gold certainly went on a moonshot from there. We turned neutral at $1,800. We didn't get the top right; it went over $2,000. But you had an ample opportunity to reenter a gold at $1,800. [Right now], it's pretty much neutral. It is coiling, getting in tighter and tighter pennant formation. So there's no need to make a forecast. Just let the market break out one way or the other."

The DoubleLine CEO also pointed out that the U.S. stocks have gotten very expensive compared to the rest of the world, and he is betting on European equities to outperform this year. "So for value buyers, the message here is fairly clear," he said.