A look at the day ahead from Julien Ponthus.

"We are going to have to be humble but a bit nimble".

Arguably not much of a hint on the timing of rate hike lift-off but investors seemed happy enough with Federal Reserve Chair Jerome Powell's congressional hearing yesterday to eagerly buy the dip on Wall Street. read more

The upbeat sentiment, helped by the Bank of Japan offering its most optimistic view of the country's regional economy in more than eight years, spread to other asset classes with commodities and oil ticking higher while the dollar hit a six-week low and Asian bourses thrived. read more

Quite crucially, following the Nasdaq's positive close, tech stocks in Hong Kong made a 4% jump, which suggests that stock pickers aren't yet writing the sector off just yet.

The first days of trading of the year had indeed exposed some early cycle teething problems with volatility hitting tech shares for which investors are typically reluctant to pay hefty premiums when interest rates are headed higher.

But while some traders seem to be comfortable with rising bond yield and gently biting into the comparative appeal of stocks, there's still some palpable angst on how smooth the tightening cycle will prove to be for markets.

Of course, today's Chinese factory-gate prices and consumer inflation rising more slowly than expected in December came as a relief but there's another major test coming up today for the smooth tightening cycle narrative. read more

As spectacular as it might be the reading seems currently priced in and expectations are still for inflation to gradually peak as we move further into 2022.

U.S. benchmark 10-year yields have slightly retreated from the 1.808% reached on Monday, the highest since January 2020.

In Europe, where the European Central Bank is nowhere near a rate hike and at the earliest expected to move in 2023, German bond yields are reluctant to creep out of negative territory.

Key developments that should provide more direction to markets on Wednesday: 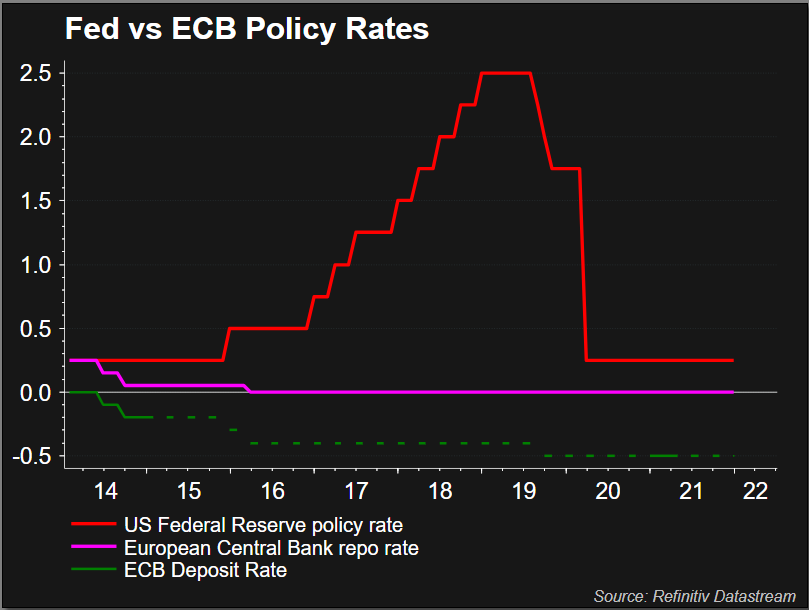 Fed and ECB policy rate history
Reporting by Julien Ponthus
Disclaimer: The views expressed in this article are those of the author and may not reflect those of Kitco Metals Inc. The author has made every effort to ensure accuracy of information provided; however, neither Kitco Metals Inc. nor the author can guarantee such accuracy. This article is strictly for informational purposes only. It is not a solicitation to make any exchange in commodities, securities or other financial instruments. Kitco Metals Inc. and the author of this article do not accept culpability for losses and/ or damages arising from the use of this publication.