LONDON, Jan 12 (Reuters) - This month's sudden spike in inflation-adjusted bond yields has jolted TINA, the thesis that "there is no alternative" to stocks, yet if history is any guide, equities should withstand this rise in real interest rates or even flourish.

With inflation-adjusted U.S. 10-year bond yields below minus 1%, many investors have viewed equities as the only mainstream asset capable of providing strong returns.

TINA is believed to be the driver behind the almost $1 trillion inflow into global equity funds last year, a figure that according to BofA data surpassed the combined inflows of the preceding two decades.

Now though, with U.S. inflation peaking around 7% and the Federal Reserve likely to raise interest rates 3-4 times this year, real yields - the nominal interest rate a bond pays minus the rate of inflation - are on the move.

Stocks tumbled after a spike in U.S. yields. The impact was especially severe on the tech-heavy Nasdaq 100 index (.NDX) where stocks trade on the premise of bumper future earnings growth, making them particularly vulnerable to higher interest rates.

The Nasdaq is set for its second worst start to a year since the 2008 crisis, coinciding with a 40 basis point jump in ten-year inflation adjusted yields since Dec. 30.

But banks including JPMorgan and Goldman Sachs are still advising clients to buy the dip, arguing that real yields remain deeply negative around -0.8%, higher interest rates are already priced in and company earnings are in robust shape.

"Historically when real yields have normalised back towards zero from negative levels, equities have had positive returns," Bernstein strategists Sarah McCarthy and Mark Diver told clients.

In the meantime, the trend should spur further sector switching - higher real yields tend to be bad news for tech shares but financials, commodities and cyclical shares such as travel usually benefit, JPMorgan wrote. 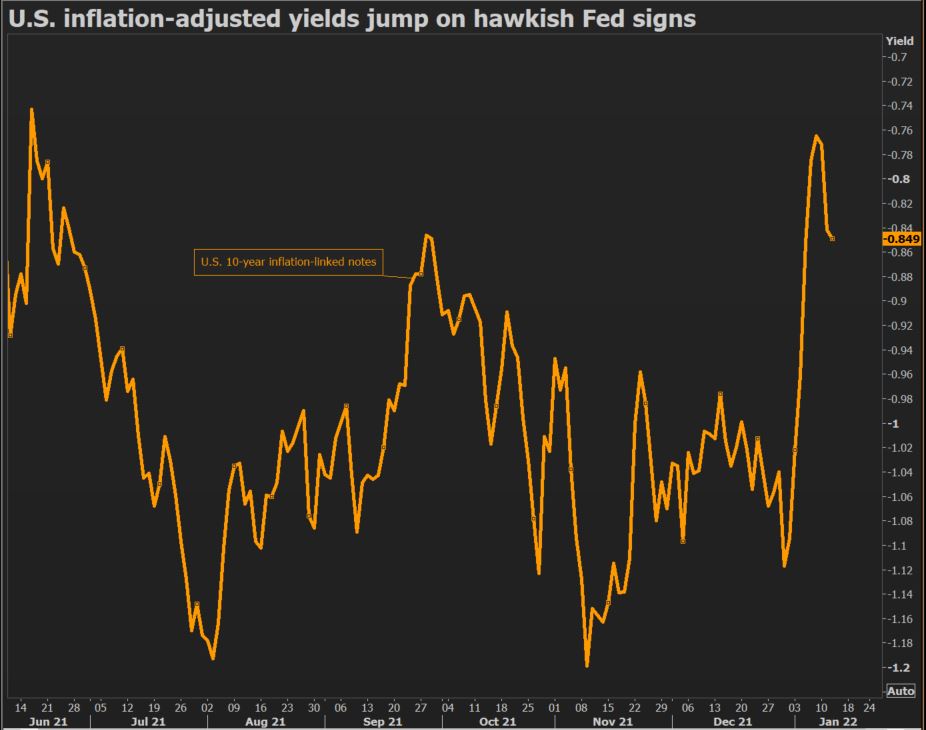 Behind the tech selloff is a premise that higher interest rates will cut into lofty share valuations. As a general rule of thumb, a sustained 100 bps rise in the U.S. TIPS yield causes a 20% drop in the price/earnings multiple, Pictet chief strategist Luca Paolini said.

Ultra-low rates have boosted equity valuations globally but those of tech stocks, often viewed as "long-duration" assets negatively correlated to rising bond yields, have ballooned to what some consider bubble territory.

Investing in tech firms, some of which have little or no profit, is therefore a bet on their future earnings potential. When rates rise, the present value of the investment diminishes on fund managers' spreadsheets.

The Nasdaq 100 currently trades at 27.8 times its 12-month forward earnings - a 54% premium over the MSCI All Country World Index (.dMIWD00000PUS), according to Refinitiv Datastream, and almost twice the 10-year average.

"With expectations that real yields will move up, must come an expectation that equity valuations move down. Multiple compressions will be particularly harsh for the kinds of stocks that are seen as 'jam tomorrow', she said referring to companies that trade off expectations of future profits.

Tangible profits and cash flow rather than future growth would command higher premia as the Fed's rate lift-off approaches, she added. 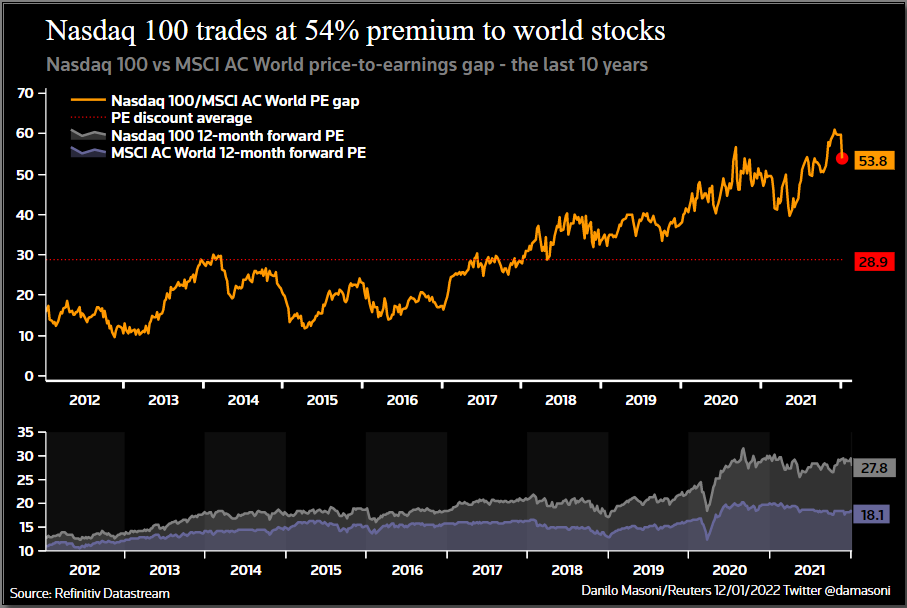 The other unknown is how retail investors, a major new force in stock trading, will behave as yields rise, and tech turns volatile.

Having become accustomed to buying into stock market dips in the belief that monetary stimulus would staunch selloffs, the retail crowd may find such strategies less rewarding as the Fed prepares the decks for its first rate rise in three years.

Giuseppe Sersale, fund manager and strategist at Anthilia is expecting stock markets to gradually lose momentum - "bounces will get more troubled and the declines more aggressive".

"Retail is currently suffering from fatigue and it doesn't have the firepower it used to have," he added.

Reporting by Danilo Masoni, Sujata Rao, Julien Ponthus, Saikat Chatterjee and Yoruk Bahceli; Editing by Kirsten Donovan
Disclaimer: The views expressed in this article are those of the author and may not reflect those of Kitco Metals Inc. The author has made every effort to ensure accuracy of information provided; however, neither Kitco Metals Inc. nor the author can guarantee such accuracy. This article is strictly for informational purposes only. It is not a solicitation to make any exchange in commodities, securities or other financial instruments. Kitco Metals Inc. and the author of this article do not accept culpability for losses and/ or damages arising from the use of this publication.