WASHINGTON, Jan 12 (Reuters) - U.S. consumer inflation running at levels not seen in more than a generation will keep the Federal Reserve on track with interest rate hikes and other changes expected in coming months to try to tame the surge in prices.

That's the take from economists and analysts as year-over-year inflation hit 7% in December, with price increases spreading to a broader set of goods and services, according to the latest Consumer Price Index (CPI) data released on Wednesday. Coupled with ongoing wage hikes and rising costs for long-lasting consumer goods, the December CPI continued to push up the key gauges Fed Chair Jerome Powell said last year that he has been monitoring to see if inflation will ease on its own.

As Powell acknowledged in a nomination hearing in Congress on Tuesday, so far it hasn't happened.

"Today's report continues a trend of inflation prints that reside at multi-decade highs over the near-term, and we do not expect to see any letup for a few months," said Rick Rieder, BlackRock's chief investment officer for global fixed income.

"Clearly, the Fed is on notice."

Fed officials ran behind in their inflation projections throughout 2021, and as a result have accelerated their plans to raise interest rates and start reducing the central bank's nearly $9 trillion in assets. 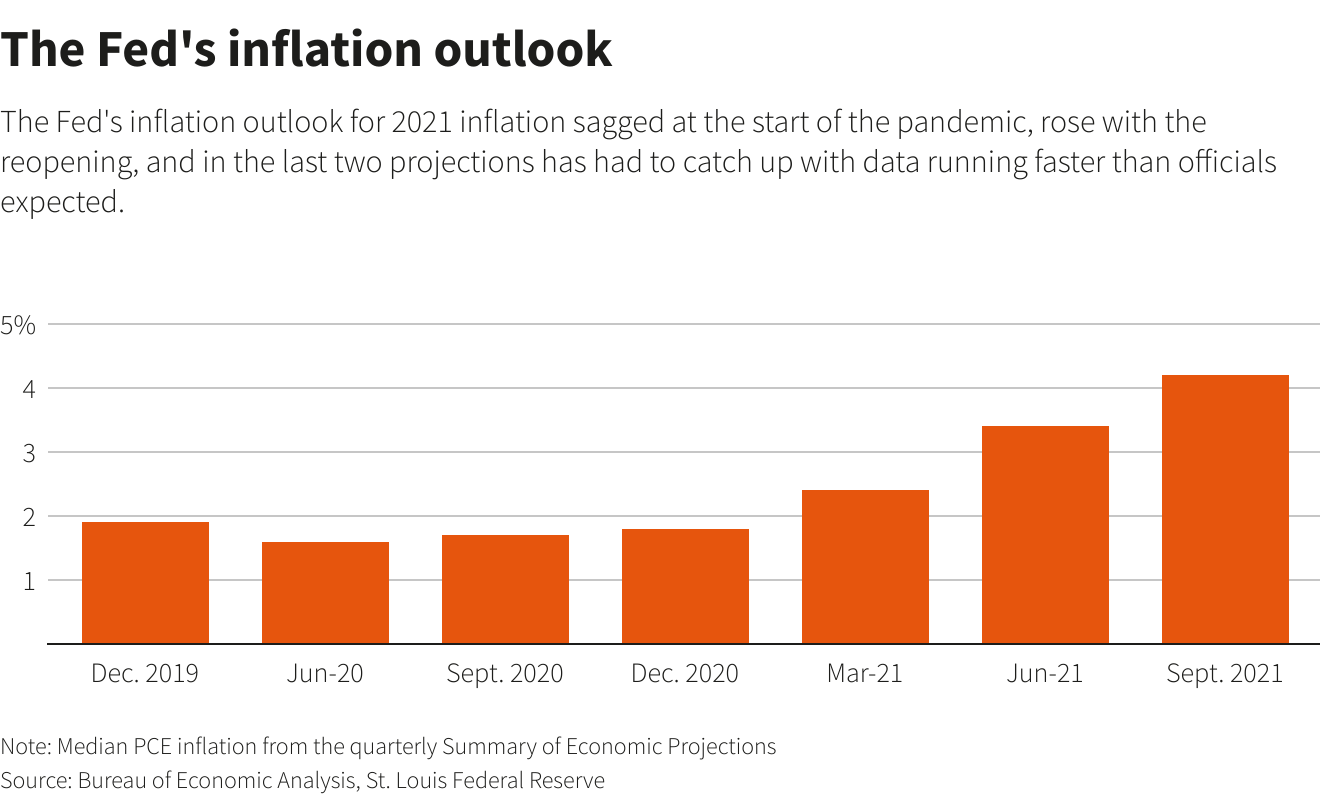 With the headline inflation rate at a "vertiginous level," the challenge for the Fed will be to avoid tightening credit and financial conditions too fast, given how much is unknown about the behavior of prices as the reopening continues, wrote Bernard Baumohl, chief global economist with the Economic Outlook Group.

"A chorus of inflation hawks are expected to howl at an even higher decibel now on the need for the Fed to kick up interest rates four or five times this year," he wrote.

"We hope those on the (FOMC) will pursue a more judicious approach ... We are in the midst of an anomalous business cycle, one marked by unusually rapid, even violent, turning points in consumption, output, employment, inventory ... Market forces will re-emerge in force this year and begin to cool inflation."

That's what Powell is hoping too. The more adjustment that comes through untangled supply chains and additional workers returning to jobs, the less aggressive the Fed may have to be.

While the headline inflation number is high, the month-to-month pace of change eased in December.

Despite the pressure on the Fed and the difficult political situation as households cope with rising prices, the peak already may have come and gone, economists at Cornerstone Macro said this week, forecasting that consumer price inflation will slow by the end of 2022 to just 1.4%, with the Fed raising rates only twice. The Fed has a 2% inflation target.

The expectation of supply catching up with cooling demand "is no longer just a forecast," Nancy Lazar, a Cornerstone economist, said this week. "Inventories are up ... Production is more in line with new orders."

Reporting by Howard Schneider; Editing by Dan Burns and Paul Simao
Disclaimer: The views expressed in this article are those of the author and may not reflect those of Kitco Metals Inc. The author has made every effort to ensure accuracy of information provided; however, neither Kitco Metals Inc. nor the author can guarantee such accuracy. This article is strictly for informational purposes only. It is not a solicitation to make any exchange in commodities, securities or other financial instruments. Kitco Metals Inc. and the author of this article do not accept culpability for losses and/ or damages arising from the use of this publication.