LONDON, Jan 13 (Reuters) - As speculation grows about when the Federal Reserve will begin reducing the size of its balance sheet, some analysts say the era of "quantitative tightening" has already started.

Central bank balance sheets ballooned after the pandemic struck in 2020, but with economies rebounding and inflation soaring above target, central bankers are preparing markets for a reversal to their bond-buying stimulus.

Below are a series of graphics laying out the scale of central bank stimulus and what might happen next.

Markets tumbled this month at the prospect of the Fed hiking interest rates as early as March with quantitative tightening -- a shrinking of its $8.8 trillion balance sheet after it doubled in size during the pandemic -- following afterwards.

Still, other central banks such as the European Central Bank are likely to keep adding to global liquidity this year, offsetting some of that tightening.

That means that while the rate of expansion in the overall central bank liquidity pool has been slowing since mid-2021, an outright reduction of balance sheets is not expected until late-2022 or even 2023. 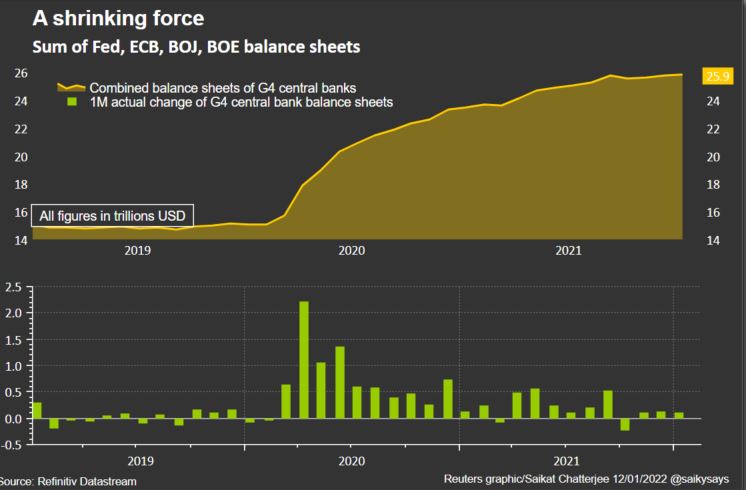 Steve Donzé, senior macro strategist at Pictet Asset Management, estimates the Fed, ECB, Bank of Japan, Bank of England, People's Bank of China and the Swiss National Bank will collectively expand their balance sheets by $600 billion in 2022 -- far below the post-financial crisis average of $1.8 trillion and 2021's $2.6 trillion, but still a net addition.

However, he says that the $600 billion forecast could turn negative if the Fed tightens faster than anticipated today.

And a stronger dollar meant that for global investors, the five biggest central banks actually withdrew more stimulus in the three months to the end of December than they injected versus the preceding three months -- the first quarter-on-quarter reduction since before the pandemic, according to his calculations. 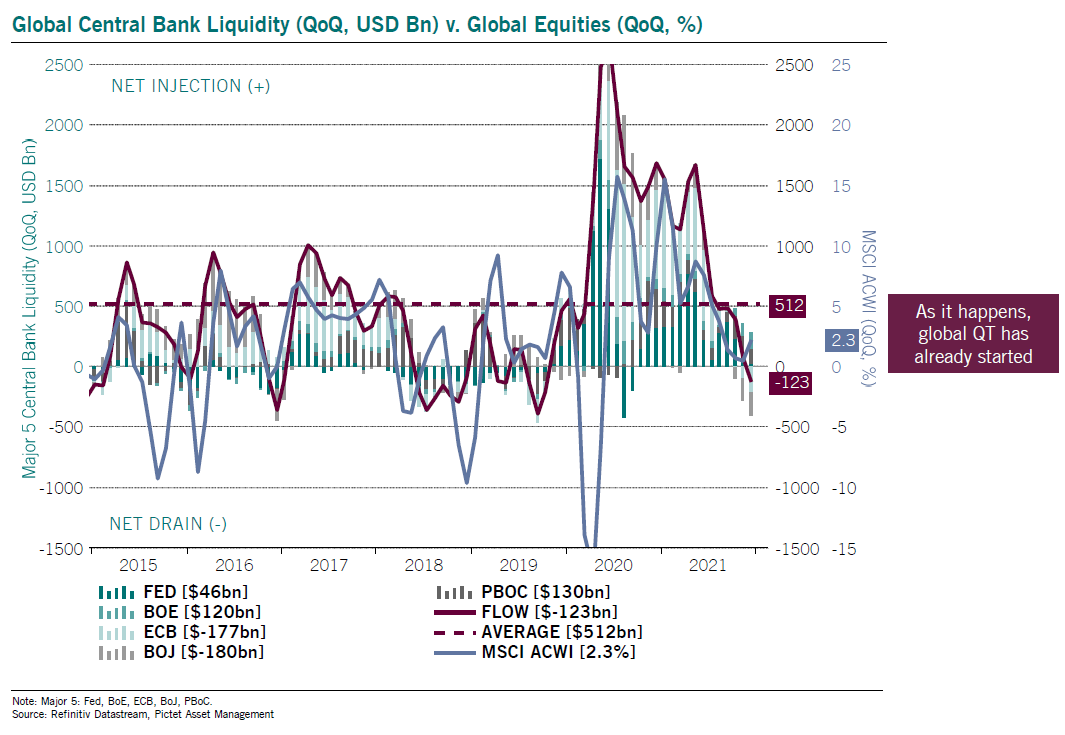 Donzé reckons Fed tightening, driven by the end of quantitative easing, rate hikes and then QT, will result in a 4.7 percentage point rise in a U.S. "shadow" real policy rate to -1.8% by the end of 2022.

This shadow rate rose 6 percentage points during the last tightening cycle, but that was over five years, between 2014 and 2019.

With central bank balance sheets towering above a huge $25 trillion, many observers say that even after some tightening liquidity will remain plentiful and rates historically low. 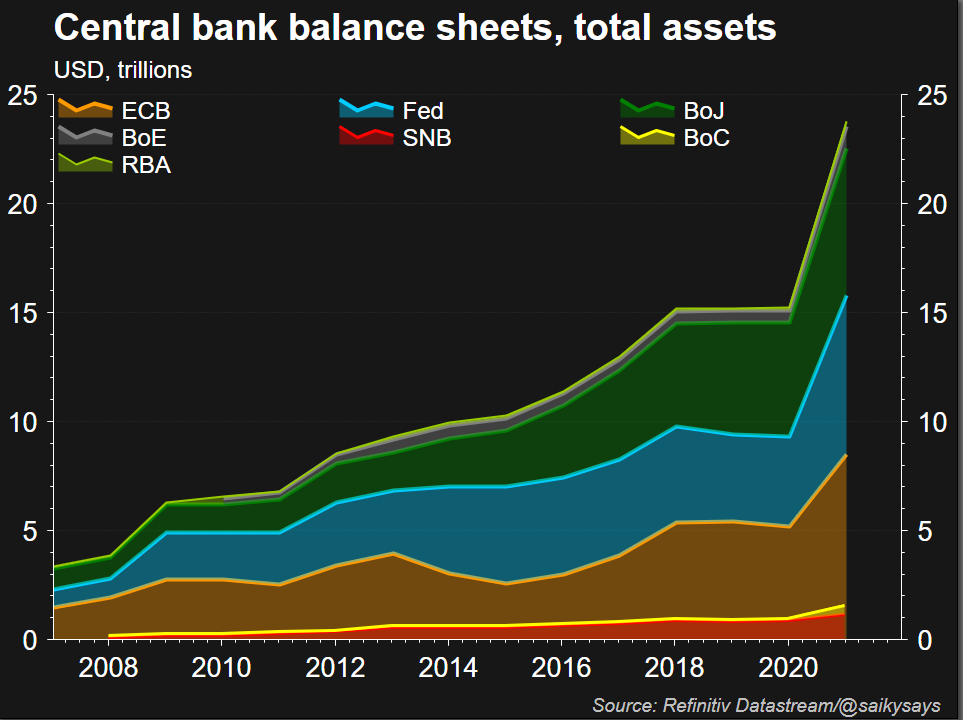 Yet it's the direction of travel that matters for markets pumped up on cheap cash.

JP Morgan strategists point out that excess money supply -- the balance of gross money supply versus money demand -- has been falling since May by one measure, and the decline in "excess liquidity" is set to accelerate this year. 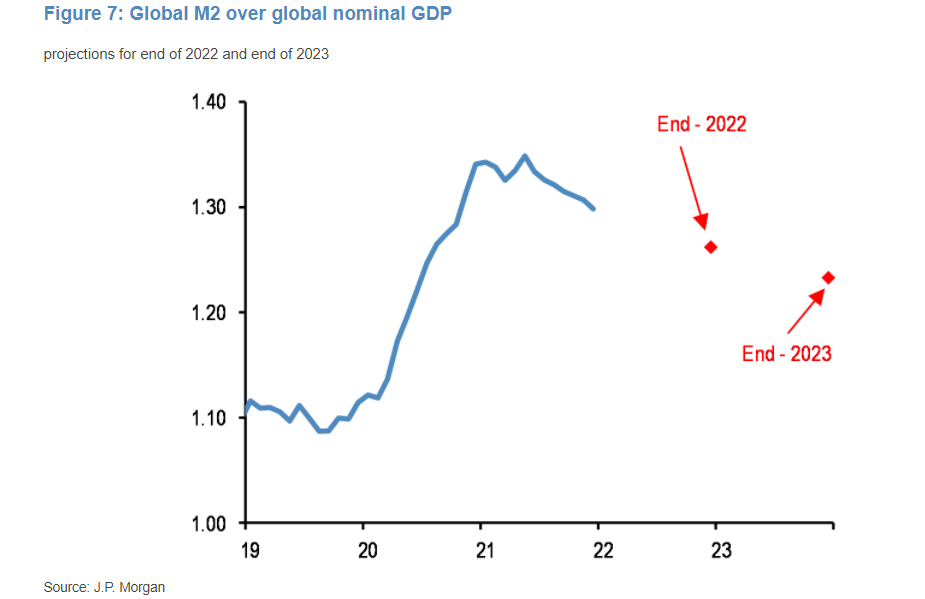 Editing by Saikat Chatterjee and Hugh Lawson
Disclaimer: The views expressed in this article are those of the author and may not reflect those of Kitco Metals Inc. The author has made every effort to ensure accuracy of information provided; however, neither Kitco Metals Inc. nor the author can guarantee such accuracy. This article is strictly for informational purposes only. It is not a solicitation to make any exchange in commodities, securities or other financial instruments. Kitco Metals Inc. and the author of this article do not accept culpability for losses and/ or damages arising from the use of this publication.