China, the world's top buyer of soybeans, brought in 96.52 million tonnes of the oilseed in the 12 months of 2021, down 3.8% from 100.33 million tonnes in 2020, data from the General Administration of Customs showed, as falling hog margins and increased wheat feeding curbed demand.

Crushers cut back soybean purchases in the second half of the year as crush margins worsened on rising imports costs and low domestic soymeal prices, said Zou Honglin, an analyst with the agriculture division of Mysteel, a China-based commodities consultancy. 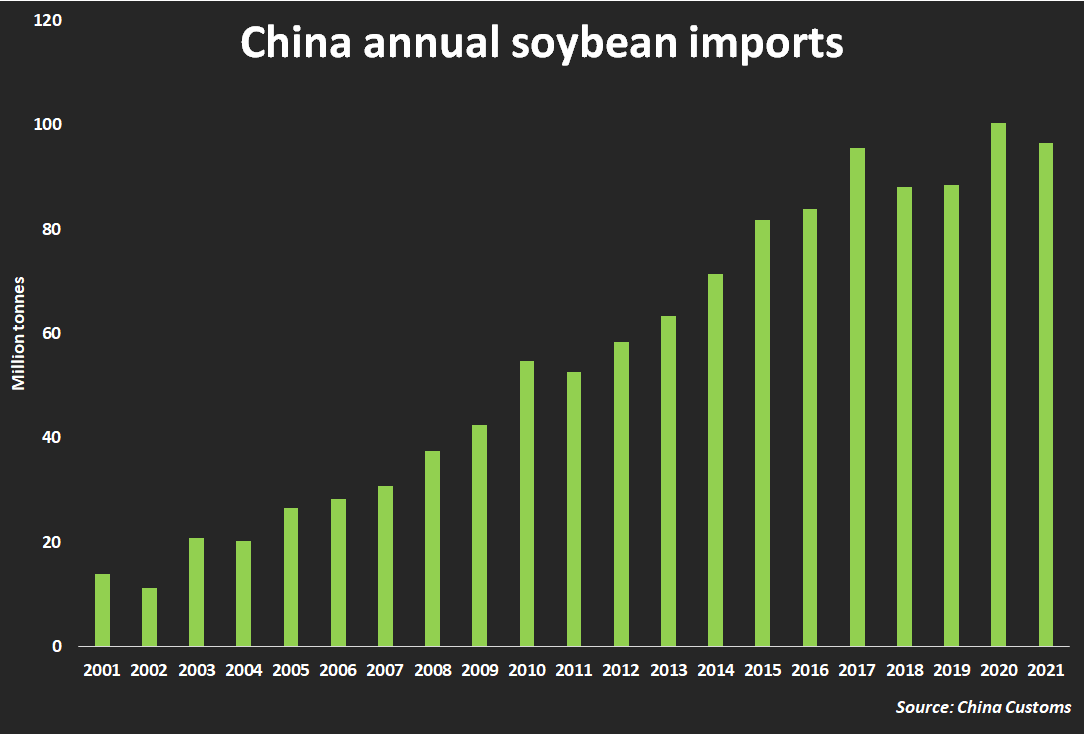 December imports, however, climbed 18% compared with the same month a year earlier, coming in at 8.87 million tonnes. The figures were also up from November shipments, the data showed.

"September and October imports were especially weak. Live hog prices fell dramatically in the first half of the year and importers didn't want to bring in too many soybeans because there was a lot of uncertainty about feed demand," said Darin Friedrichs, co-founder of agricultural research firm Sitonia Consulting.

"It also seems like buying from the U.S. Gulf has been slow due to logistics disruptions. Many buyers just decided they could wait until new crop Brazil. That could create an interesting situation depending on how the heat wave and crop losses develop in South America," Friedrichs said.

Shipments from the United States in the 2021/22 marketing year were curbed due to loading delays at ports following Hurricane Ida and an early 2022 Brazil soy crop. read more

However, drought in main soybean production regions of Brazil, China's largest supplier of the oilseed, could cause average yields to reach a 6-year low and cut output this season from previous estimates.

China's soybean imports hit an annual record in 2020 as crushers ramped up purchases thanks to healthy demand from a pig herd rapidly recovering from outbreaks of African swine fever. A growing oversupply of pigs, however, slashed profits from raising the livestock and sent crush margins into negative territory in 2021. These tumbled to record lows at negative 650 yuan ($102.19) a tonne in June.

The collapse in hog sector profitability and a sharp rise in wheat feed use crimped demand for soybeans, with analysts predicting around mid-2021 that China's soybean imports for the year might be less than 100 million tonnes. read more

Demand for wheat as feedstock could ease in the new year as corn prices fell following a bumper harvest, while Beijing lately banned feed producers and users from participating in wheat auctions from state reserves. read more

Reporting by Hallie Gu and Dominique Patton; Editing by Kenneth Maxwell and Richard Pullin
Disclaimer: The views expressed in this article are those of the author and may not reflect those of Kitco Metals Inc. The author has made every effort to ensure accuracy of information provided; however, neither Kitco Metals Inc. nor the author can guarantee such accuracy. This article is strictly for informational purposes only. It is not a solicitation to make any exchange in commodities, securities or other financial instruments. Kitco Metals Inc. and the author of this article do not accept culpability for losses and/ or damages arising from the use of this publication.