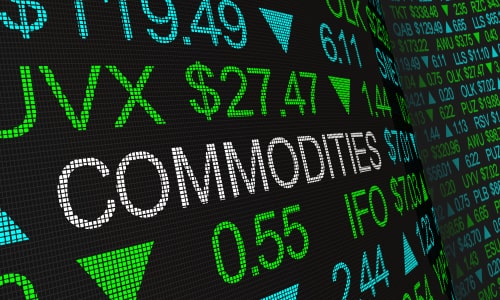 (Kitco News) If Russia-Ukraine tensions were to escalate further, there would be "far-reaching" consequences for commodities, and Europe could be the worst hit, according to a report by ING.

"If the Russia-Ukraine crisis escalates further, expect much higher commodity prices, and Europe could be the worst hit," said ING head of commodities strategy Warren Patterson. "Reaction to any aggression could have far-reaching consequences for commodities."

The commodity sector will surge if the U.S. introduces sanctions as a response to potential action by Russia against Ukraine.

"Tough sanctions would rattle commodity markets," said Patterson. "It appears that a number of commodity markets are starting to at least price in some geopolitical risk around the growing tension between Russia and Ukraine. There is still plenty of uncertainty over how the situation will evolve."

Natural gas is on top of the list. And since Russia is the dominant supplier of natural gas to Europe, sanctions related to the energy market would hurt Europe the most, especially in the middle of winter, Patterson noted.

"Natural gas would likely receive the most attention, particularly in Europe. The region is already dealing with an extremely tight gas balance. Therefore, any further reduction in Russian gas flows to the region would leave the European market vulnerable," Patterson stated.

Russia makes up around 50% of European gas imports. And several pipelines go through Ukraine.

"Pipeline flows come through several pipelines via Ukraine, the Yamal-Europe pipeline via Belarus, the Nord Stream pipeline and the TurkStream pipeline. Nord Stream 2, which is now complete, is awaiting regulatory approval before Russian gas can flow through it. However, the U.S. has already made it clear that in the event of sanctions, Nord Stream 2 would be targeted," Patterson explained. "It would be difficult for Europe to stomach sanctions which effectively cut off Russian gas supply."

The crude oil market, which already saw a significant surge in prices this year, could see further upside pressure if sanctions against Russia were to be introduced. At the time of writing, Brent crude was trading just below $90.

"Russia is the second-largest oil producer in the world, with production averaging around 10.5MMbbls/d in 2021 … A large part of this crude is processed in domestic refiners, but a sizeable amount of it is still exported … This makes Russia the second-largest crude oil exporter after Saudi Arabia. Any potential action taken, which impacts a large share of these exports, would likely push the global market into deficit and would be extremely bullish for oil," Patterson added.

Sanctions could also impact metals like aluminum. Patterson said an example would be a look back to 2018 when the U.S. placed sanctions against Rusal, which rattled the aluminum market.

"Russia [is] the largest aluminum producer, after China. The global aluminum market is in deficit at the moment, and so any disruption to these flows would only push the market further into deficit," Patterson said.

Other metals that could see positive price swings from sanctions include nickel, copper, palladium and platinum. "Russia is the world's largest palladium producer, while it is also an important nickel producer, a market in which there are already concerns over tightness, given the strong demand dynamics," Patterson described.

Another sector to watch is agriculture, especially wheat, with Russia being the world's largest wheat exporter. Any problems related to trade could put upward pressure on prices.

"The country has produced more than 85mt a season in recent years, and annual exports amount to close to 40mt, which makes up almost 20% of global wheat trade," Patterson said.

"In the proposed sanction package from the U.S. Democrats, the food & agricultural industry is not mentioned. However, sanctions against financial institutions (and possibly even cutting Russia off from the SWIFT system) could make trade more difficult."