LONDON, Jan 27 (Reuters) - The U.S. Federal Reserve has kicked off 2022 with a clear message: rates will rise to contain surging inflation.

Other central banks have already started the rates liftoff, and even dovish ones are starting to unwind the stimulus unleashed to protect their economies from the COVID-19 pandemic.

Here's a look at where policymakers stand on the path out of pandemic-era stimulus, in order of how hawkish they appear: 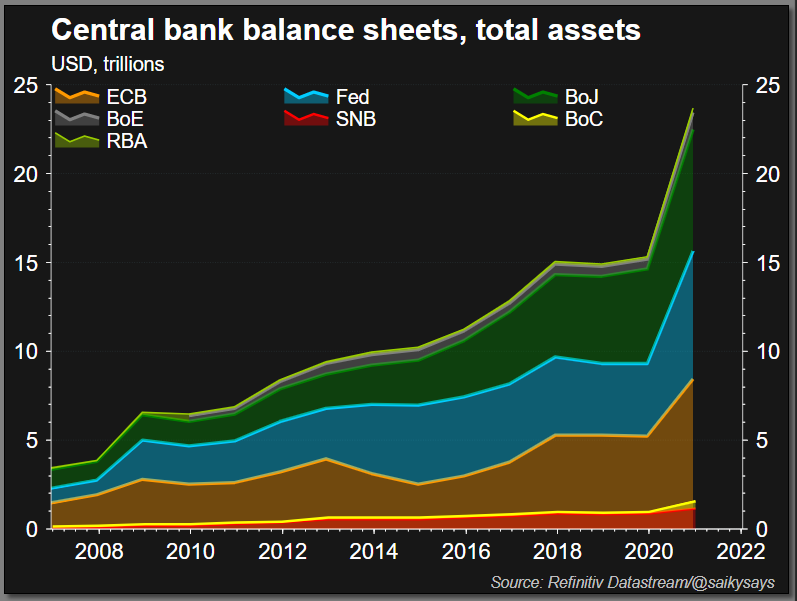 Norway's central bank cemented its position as the most aggressive rate-setter in the developed world, raising ratesin December after starting to tighten policy in September.

The bank last month took rates to 0.5% and at its January meeting it flagged a March rate hike. 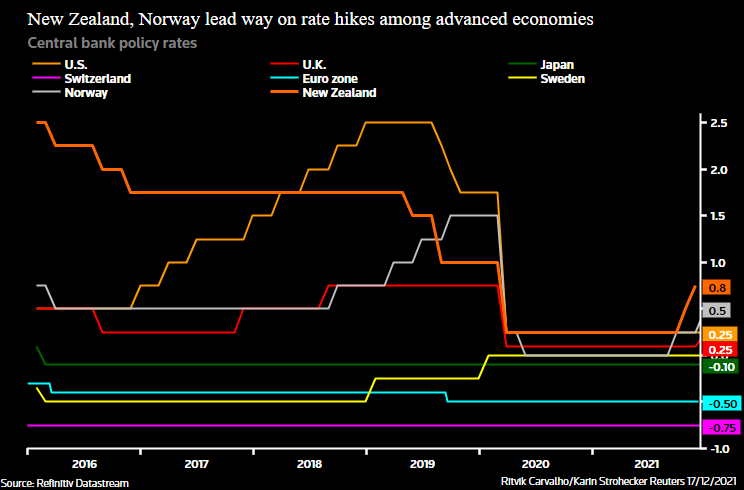 Annual consumer inflation hit a three-decade high in the fourth quarter, cementing expectations policy will be tightened at the Feb 23 central bank meeting.

The Bank of England is expected to hike rates next week, after surprising markets with a rate rise in December.

Explaining its 15-bps hike to 0.25%, the BoE said inflation was likely to hit 6% in April - triple its target - and that more rate rises would probably be needed.

Markets price in a 90% chance of a Feb rate hike and anticipate four 25 basis-point rises by end-2022. 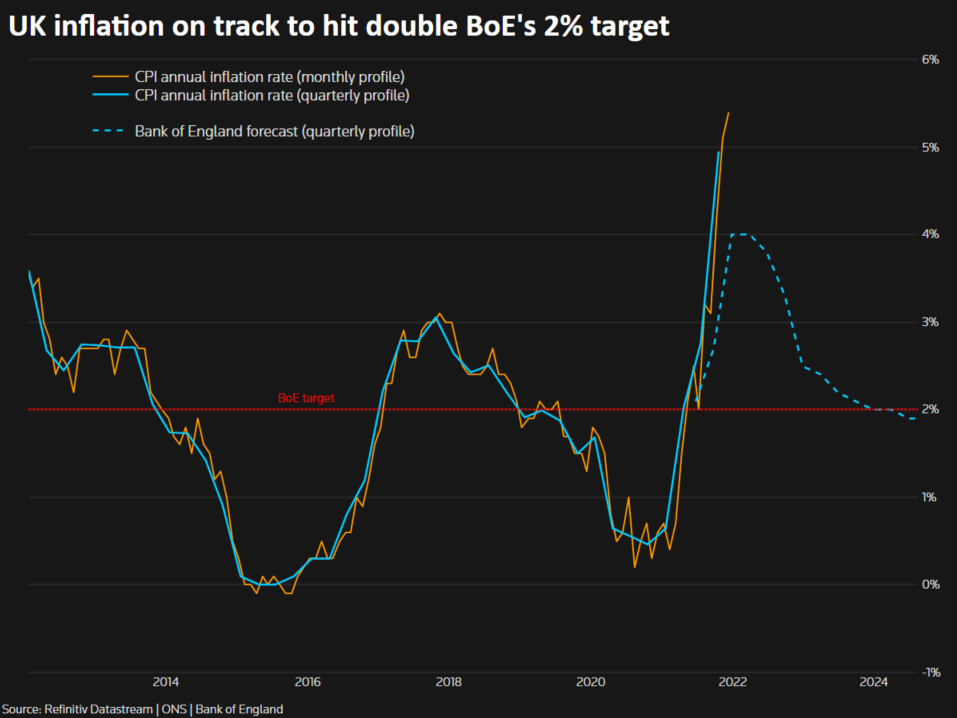 The Federal Reserve on Wednesday signalled its intent to raise interest rates in March and reaffirmed plans to end its bond purchases that month in what U.S. central bank chief Jerome Powell pledged will be a sustained battle to tame inflation.

The possibility the Fed could move even more aggressively has unnerved Wall Street, putting the S&P 500 index on track for its biggest monthly drop since March 2020.

Deutsche Bank expects the Fed to raise interest rates at every meeting from March to June and then revert to a quarterly tightening cycle from September, amounting to five hikes this year. Nomura, meanwhile, predicts a 50-bps move in March. 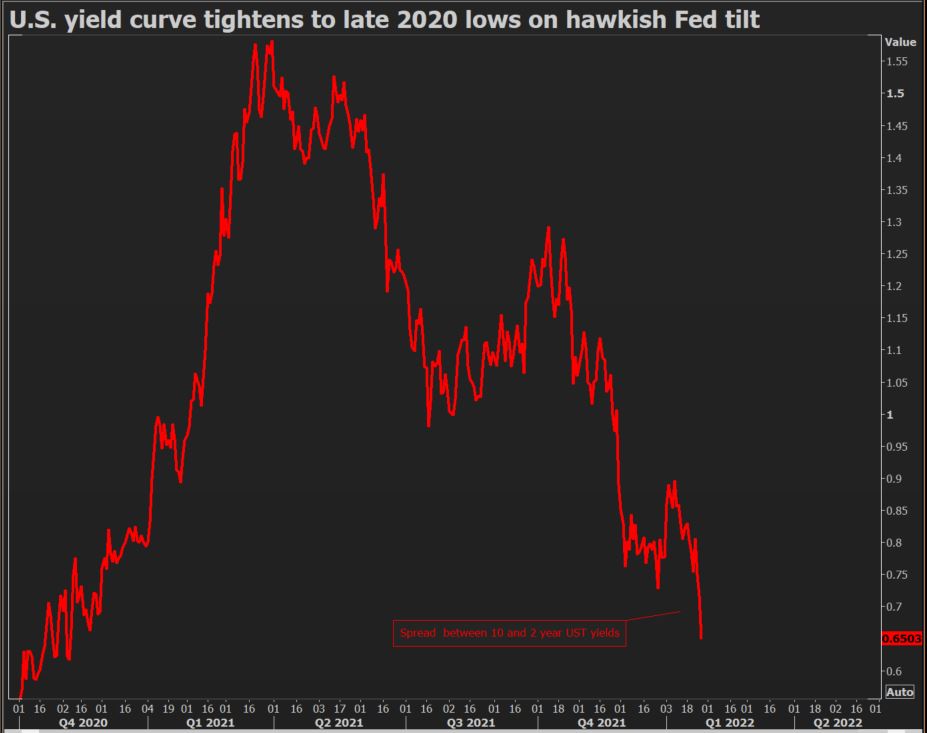 The Bank of Canada on Wednesday surprised some by opting not to raise the 0.25% interest rate but Governor Tiff Macklem said the bank was on "a rising path".

With the hottest consumer inflation since 2014 and strongest labour market since 2008, the Reserve Bank of Australia will face immense pressure at next week's meeting to abandon its dovish stance.

It has already moved toward unwinding pandemic stimulus by ditching an ultra-low bond yield target and has opened the door for a 2023 rate hike, versus a previous forecast of 2024.

But while Governor Philip Lowe has said a 2022 rate hike is unlikely a Reuters poll of analysts forecast the RBA to hike rates in November and end QE next week.

Sweden has ended pandemic-era lending facilities but has pencilled in a rate hike only for late 2024.

Headline inflation in December was 4.1% versus the 2% target. The December surge was due mainly to electricity prices and overall price pressures remain modest, central bank Governor Stefan Ingves said earlier this month.

The European Central Bank is on a very different path to most peers.

While inflation is at a record high 5%, the ECB expects inflation to retreat and says a rate rise this year is unlikely. However, it has promised copious support via its long-running Asset Purchase Programme and signalled a very gradual exit from years of ultra-easy policy. 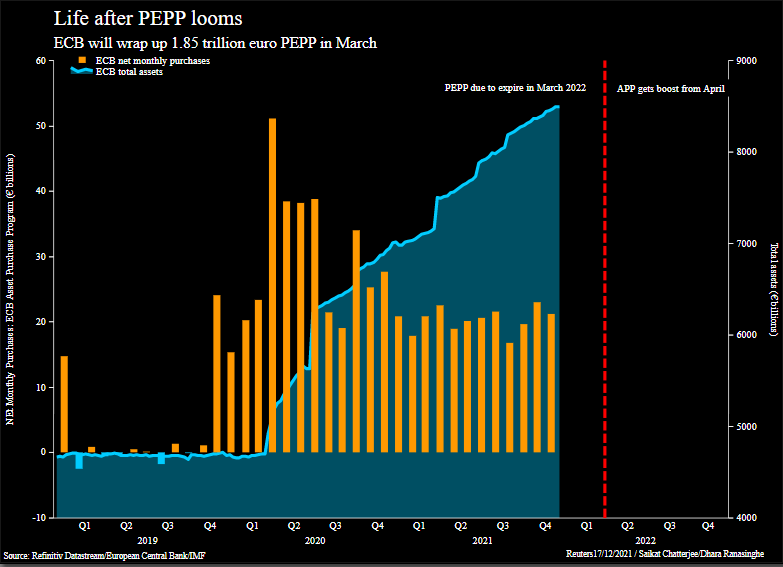 Life after PEPP looms in the euro area

The Bank of Japan has taken tentative steps to unwind stimulus, pledging to slow purchases of corporate bonds and commercial paper to pre-pandemic levels from April.

This month, it raised inflation forecasts but quashed speculation it may soon signal a shift in its decade-old stimulus experiment, saying it was in no rush to change ultra-loose monetary policy.

The Swiss National Bank remains at the dovish end of the central bank spectrum, despite higher inflation and says its loose stance was appropriate.

However, faced with a property boom, it told lenders this week to hold additional capital amounting to 2.5% of risk-weighted positions that are backed by residential real estate.

Reporting by Dhara Ranasinghe, Sujata Rao, Tommy Wilkes and Saikat Chatterjee; Editing by Lisa Shumaker
Disclaimer: The views expressed in this article are those of the author and may not reflect those of Kitco Metals Inc. The author has made every effort to ensure accuracy of information provided; however, neither Kitco Metals Inc. nor the author can guarantee such accuracy. This article is strictly for informational purposes only. It is not a solicitation to make any exchange in commodities, securities or other financial instruments. Kitco Metals Inc. and the author of this article do not accept culpability for losses and/ or damages arising from the use of this publication.