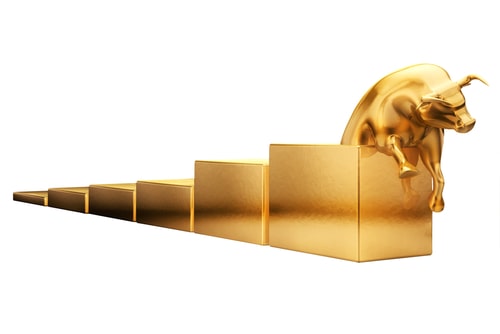 (Kitco News) A weaker U.S. dollar and increased geopolitical tensions will keep gold supported this year, with the precious metal rising to $1,900 in the fourth quarter, according to StoneX. But a year of "boring prices" does not mean "a boring market."

This year, the gold price will take its cues from the Federal Reserve policy action, the U.S. dollar direction, and geopolitical tensions.

"The Fed's new monetary cycle is now well-discounted (there was no knee-jerk reaction to the December dot plots, for example)," said StoneX head of market analysis for EMEA & Asia regions Rhona O'Connell. "Tailwinds including geopolitical risk and persistently negative real interest rates are supportive, and there is a case also to be made for some weakening in the dollar as the ECB changes its stance and emerging markets show signs of recovery."

Inflation and the Fed's battle against rising prices will remain at the forefront. But markets might be overestimating just how aggressive the U.S. central bank will have to be in its fight to control inflation.

Market participants are currently looking for four or five rate hikes this year. The Fed's dot plot is telling investors that there could be three rate hikes. But the balance sheet runoff is what could make a big difference, giving the policymakers more flexibility.

"We've got two extreme possibilities. One extreme is that rate hikes are aggressive and balance sheet shrinkage is aggressive, which would take yields much higher. The idea would be to squeeze inflation out of the system as far as possible. But that risks derailing the economic recovery," O'Connell said in her 2022 outlook. "At the other end, the balance sheet shrinkage could be good enough in and of itself to allow the Fed further flexibility in terms of its rate hikes. And we could just have two rate hikes this year."

The 2022 reality will likely be somewhere in the middle, she added. And even with the Fed's tightening program, real yields will remain negative, which works well for gold.

"We have nominal interest rates yields in Europe and part of Eastern Europe in negative territory. As far as the U.S., real yields are negative going all the way to 20 years," O'Connell pointed out. "Despite balance sheet runoff, tapering, and rate hikes, there is no foreseeable way that anything from two to ten-year real bond yields will move into positive territory in the near future."

The U.S. dollar is another driver gold will be eyeing closely, with StoneX looking for a weaker greenback towards the end of the year. "We are mildly bearish on the dollar further out," said O'Connell, citing domestic issues and competition from the euro.

"There is uncertainty over economic legislation, with the Build Back Better plan now under substantial threat. Also, we are in the election year for the mid-terms, and the debt ceiling is rising again," she said. "When you add in the possibility of a much more hawkish European Central Bank further down the line, there is an argument to be made for emerging markets to start attracting international investment."

On top of this, there is geopolitical risk, with tensions continuing to build between Russia and Ukraine as well as China and Taiwan.

All of those elements work in gold's favor. But one headwind to watch out for is economic stability, which is great for markets but a drag on gold.

"Economic stability could take some wind out of gold's sails. We are looking for relatively narrow ranges this year for gold. It will be a year of potentially boring price. But a boring price does not mean a boring market," O'Connell noted.

StoneX projects gold to average the year at $1,871 and trade at $1,900 an ounce during the fourth quarter.

When it comes to silver, O'Connell said its future is "particularly bright," citing new demand coming from solar cells.

"Solar cells are taking a lot of tonnage out of the market. Usage in that area could expand 10% this year, taking it to 14% of global demand," she said. "Looking at silver moving into a deficit this year."

But one thing that can't be ignored is that silver relies on gold's performance. "When gold is broadly directionless, silver tends to underperform, and the past few months of 2021 were no exception. Very recently, gold started to move into a new range. When gold makes up its mind and decides to go somewhere, silver will be more volatile out of the two," O'Connell explained.