(Kitco News) - According to the preliminary data released by the U.S. Geological Survey (USGS), global recoverable mine gold reserves amounted to about 54,000 metric tonnes in 2021, which is 2% more than 53,000 tonnes reported in 2020.

USGS defines recoverable mine reserves (not to be confused with resources) as the part of the reserve base that could be economically extracted or produced at the time of determination. 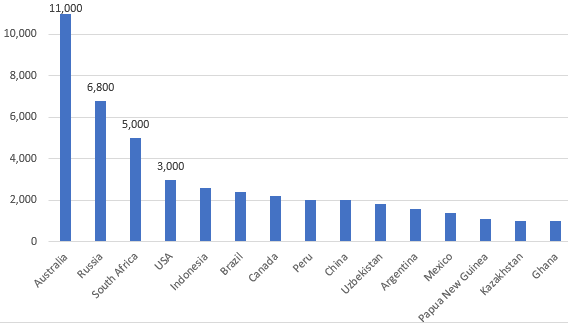 Largest countries by mine gold reserves in 2021, tonnes. Source: USGS.

As Kitco reported before, China is the top gold producer with 370 tonnes of the yellow metal mined in 2021.

At the same time, China is facing a rapid depletion of its current estimated domestic mine gold reserves. Reserves-to-production (R/P) ratio that represents the "burn rate" of proven reserves of mineral commodities when applying current levels of domestic mine production shows that China is in the "red zone" for future supplies of the yellow metal.

In fact, China is burning through its mine gold reserves fastest in the world.

In order to overcome shortages of essential mineral commodities, as well as to secure long-term sustainable supplies for its ambitious economic development strategy, the Government of China empowered and encouraged a number of domestic state-owned and private companies to actively pursue mining deals throughout the world.