Inflation fears have Wall Street eyeing Fed rate hike shocker in March, but gold price is not buying in 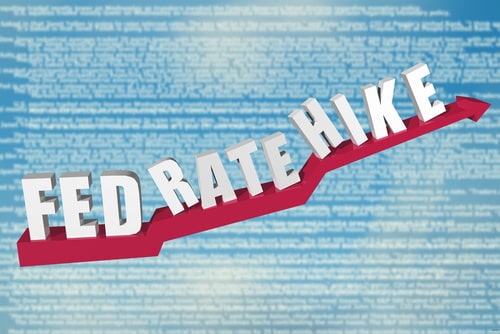 (Kitco News) The news of U.S. inflation soaring to new four-decade highs is sending shock waves through Wall Street as markets price in a half-point rate hike by the Federal Reserve in March. But the gold market is not buying into the narrative, with prices climbing to test critical trading levels.

With the January inflation data coming in higher-than-expected, there is a growing fear that price pressures might get worse and last even longer than the Federal Reserve anticipates.

Annual inflation pace of 7.5% and core inflation at 6.0% are the fastest rates seen since 1982, with broad-based price increases reflecting strong demand. This could put the U.S. central bank in a corner, forcing it to tighten aggressively.

"This confirms that the Fed needs to act swiftly to contain inflation, as wage pressures have only strengthened in recent months," said CIBC Economics senior economist Katherine Judge. "Inflation will likely accelerate further above the 7% mark next month, while core inflation is also set to accelerate, as higher energy prices combine with base effects and strong demand in core categories."

In response to the data, yields and the U.S. dollar surged as markets re-priced expectations of a potential 50 basis points rate hike at the Federal Reserve's March meeting.

"The odds of a 50 basis point hike jumped … and the yield on the 10-year Treasury is now trading around 2%," said Commonwealth Financial Network head of investment management Brian Price. "I expect that we'll see a return of the volatility that was prevalent for most of the month of January in the wake of this report … It could be a rough ride for risk assets until inflationary data starts to abate."

Gold initially dropped but was able to shake off all the daily losses and start climbing towards the $1,850 an ounce level. At the time of writing, April Comex gold futures were trading at $1,836.80.

This is a sign that the gold market is not buying into this idea of a too aggressive Fed, said TD Securities head of global strategy Bart Melek.

"Despite what the bond market is pricing, not sure if the gold market is on the side of the idea that the Fed is going to do what is necessary to put the inflation genie back into the bottle again. We are at this point trading 60% probability for a 50-basis point move in March. Not sure the gold market buys into it," Melek said. "Are they really willing to crush the economy? The Fed still believes inflation is transitory."

At the time of writing, the CME FedWatch Tool was pricing in a 98.6% chance of a half a point rate hike in March.

Aside from rate hike expectations, the gold market is also finally benefitting from its inflation hedge appeal. "Potentially, central banks may be buying more gold based on inflation being higher for longer," Melek said.

There is a push-and-pull battle in the gold space, with future Fed rate hikes weighing on prices and accelerating inflation pushing prices higher.

"People who think inflation is going to rage out of control, gold is the historic bid. That's the place you put your money if the inflationary outlook is shaky. At the same time, higher rates from the Fed are bearish for gold. You're seeing this push and pull," said DailyFX strategist Michael Boutros.

What does that mean for gold? A price range between $1,800 and $1,850 is the most likely outcome until the markets are more certain of what the Fed's tightening cycle will entail, said OANDA senior market analyst Edward Moya.

"If the 10-year Treasury breaks above the 2.00% level, gold could see some short-term weakness, but nothing that should signal the beginning of a bearish trend," Moya noted. "With inflation hitting more categories, gold could start behaving more like an inflation hedge as the flattener trade will likely limit the dollar's gains going forward."