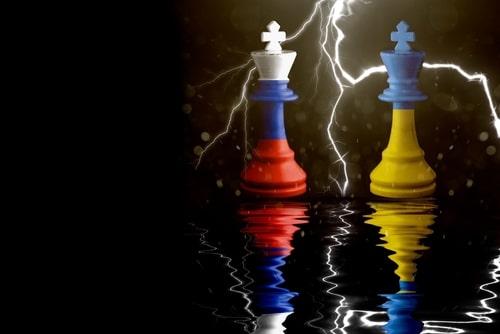 (Kitco News) The gold market saw a sudden move higher on Friday afternoon after the U.S. said that Russia could launch military action in Ukraine "any day."

"Any American in Ukraine should leave as soon as possible, and in any event in the next 24 to 48 hours," U.S. President Joe Biden's national security advisor, Jake Sullivan, said during a press briefing. "[Conflict] could begin during the Olympics despite a lot of speculation that it could only happen after … There is a credible prospect that a Russian military action would take place even before the end of the Olympics."

The U.S. does not know whether Russian President Putin has made any official orders, but "it may well happen soon," according to Sullivan.

There are a number of military options Russia could take, according to the U.S.

"I can't obviously predict what the exact shape or scope of the military action will be," Sullivan said. "As I said before, it can take a variety of forms. It could be more limited, it could be more expansive, but there are very real possibilities that it will involve the seizure of a significant amount of territory in Ukraine and the seizure of major cities including the capital city."

In response to the news, gold prices surged more than $20, with the April Comex gold futures last trading at $1,857, up more than 1% on the day. The $1,850 an ounce level was a critical one to test and breach. And according to analysts, if this level holds, it could open the door to more gains.

Gold could breach the $1,900 an ounce level if there is a military action, said OANDA senior market analyst Edward Moya.

"Gold surged after PBS reported that the U.S. believes Russian President Putin has decided to invade Ukraine and communicated those plans to the Russian military. Gold could rally above the $1900 level if troop movements occur. Gold traders would not want to be short heading into the weekend," Moya said.

Bitcoin also tumbled along with stocks, falling along with other risk assets. At the time of writing, Bitcoin was last at $43,054.80, down nearly 4% on the day.

There are more than 100,000 Russian troops stationed near the Ukrainian border. And for the next ten days, Russia will be holding military exercises in Belarus and the Black Sea. Russia has repeatedly rejected U.S. statements that it plans to invade Ukraine, adding that NATO is the one aggravating the security situation by considering Ukrainian membership in the military alliance.