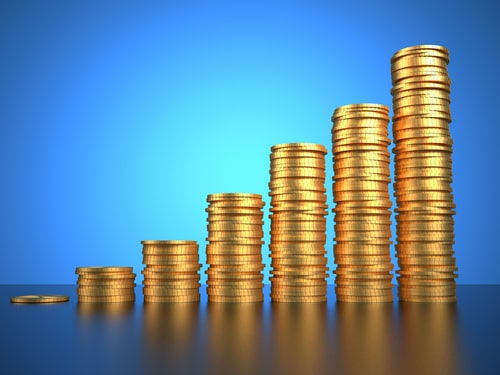 "There is a lot of different angles to look at gold right now - from the macro, geopolitical, and hedge against inflation. Bitcoin and stocks are selling off, and people are looking for places to park their money. Gold is wearing a lot of different hats right now," Blue Line Futures chief market strategist Phillip Streible told Kitco News.

A barrage of data from Thursday morning gave investors pause as positive momentum in the U.S. labor market slowed, the Philadelphia region's manufacturing sector numbers were weaker than expected, and the housing data out of the U.S. was mixed.

"The economic data are decelerating. [Officials] are trying to spin it as a great economy. But the reality is that economy is slowing while the Fed is extremely hawkish. That's the biggest problem," said Streible. "The economy will continue to slow well into the second quarter, and the Fed's tightening will really hurt growth."

Gold is a hedge against declining growth, he added. "The yield curve is flat, and if you look, it is becoming inverted. That tends to lead to a recession or depression."

On top of new recession fears, the geopolitical angle is keeping gold in high demand. And the uncertainty of the information that investors are getting around what's happening in Ukraine is adding to the risk-off sentiment in the marketplace.

"Part of the move is geopolitical news-driven right now. There's probably $25 built into the price of gold right now as geopolitical risk. If tensions back off, you'll see the gold price come down," Streible said.

The U.S. said that war in Ukraine appears imminent after shelling was reported on Ukraine's front line. "The evidence on the ground is that Russia is moving toward an imminent invasion. This is a crucial moment," said U.S. Ambassador to the United Nations, Linda Thomas-Greenfield.

U.S. President Joe Biden confirmed that there is every indication that Russia is planning to invade Ukraine, citing Moscow carrying out a false flag operation to justify military action. "We have reason to believe they are engaged in a false flag operation to have an excuse to go in. Every indication we have is they're prepared to go into Ukraine and attack Ukraine," Biden told reporters on Thursday.

Russia has been denying that it plans to attack Ukraine and stated earlier this week that it was pulling back some troops from the border. However, Washington noted there was no evidence of the withdrawal.

Gold could rally to $1,923 before encountering some major overhead resistance, according to analysts. That is why it will be a key level to watch as the precious metal continues to take one higher ranges.

"The levels we need to be looking for is $1903, which is the high weekly close from last year, and $1,923. That $20 zone is critical," said DailyFX strategist Michael Boutros. "I need a technical break above $1,923. If that breaks, a major threshold will open up the upside."

Gold's fundamentals are looking quite solid at the moment, Boutros told Kitco News. "Inflation is running hot, which is bullish for gold. You got expectations of interest rates skyrocketing. Geopolitical events worsening are adding fuel to the fire. The situation in Ukraine is taking a turn to foreseeable violence. That is spooking markets. Gold is feeling the technical breakthrough."

Gold will be looking to test $1,900 if the is an escalation in Ukraine, said OANDA senior market analyst Craig Erlam. "The latest move has seen gold hit its highest level since mid-June, and there still appears to be momentum in the move. So we could see $1,900 tested. That's the next big test for the yellow metal, and a big escalation in Ukraine could be the catalyst for such a move," Erlam wrote.