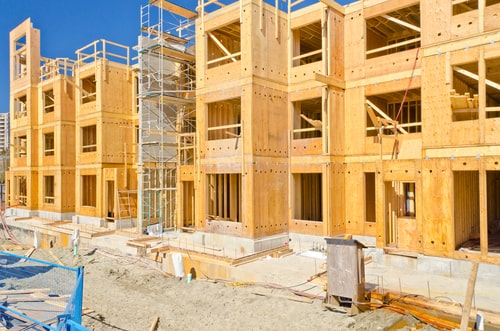 U.S. housing starts declined 4.1% to a seasonally adjusted annual rate of 1.638 million units in January, the Commerce Department said on Thursday. Consensus forecasts were calling for starts to be around 1.700 million. December's data was upwardly revised to 1.708 million units. For the year, housing starts were up 0.8%.

At the same time, building permits, which are a precursor to future projects, were up 0.7% at 1.899 million in January after December's revised total of 1.885 million. For the year, building permits rose 0.8% from the January 2021 levels.

Homebuilding cooled in the U.S. in January due to labor and material shortages, said CIBC World Markets economist Katherine Judge. However, there are some positive signs.

"The strength in permits adds to the existing overhang and is a positive indicator for homebuilding ahead as worker absenteeism due to Omicron fades and supply chain issues improve over the year," Judge said.

Gold prices edged up after already seeing double-digit gains prior to the data release. December Comex gold futures were last at $1,898.10, up 1.42% on the day.

Analysts point to Russia-Ukraine tensions as the reason behind the rally on Thursday, with the U.S. saying the is no evidence that Russia pulled away some of its troops from the border with Ukraine.

"Risk aversion is keen on reports that shots have been fired along the Ukraine-Russia border. Reports said Ukrainian troops fired on Russian-backed rebels. Reuters reported that the U.S. said a Russian invasion of Ukraine is "imminent" and that top U.S. diplomats are changing their travel plans," Kitco's senior analyst Jim Wyckoff said.