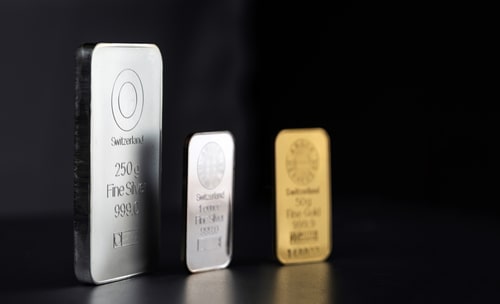 (Kitco News) With sanctions piling up against Russia in response to the escalating situation in Ukraine, investors should be watching the price of precious metals as commodities' supplies could get derailed, according to the BMO's report.

Tensions escalated on Tuesday as the West reacted to Russian Vladimir's Putin announcement recognizing two self-proclaimed republics in eastern Ukraine and ordering to send troops there as "peacekeeping forces."

Biden described Russia's actions as "the beginning of Russia's invasion of Ukraine."

Earlier in the day, Germany announced that it was halting the certification process of the Nord Stream 2 gas pipeline from Russia. On top of that, the EU has imposed sanctions on most members of Russia's Duma, while also banning purchases of Russian government bonds.

This could be just the beginning of sanctions against Russia, which is why the BMO report decided to look at the potential impacts on commodity trade flows.

"Ultimately, we would expect a redistribution of Russian commodity exports away from Europe and North America, and toward China. Russia has already committed to sending 100Mtpa of coal into China over the coming years, which will help China offset its Australian coal ban," said BMO Capital Markets commodities analyst Colin Hamilton.

Redirecting existing trade routes would show up as temporary dislocations in market fundamentals, Hamilton said in the report. And the commodities that will be the most exposed to supply shortages are precious metals, according to BMO.

Palladium stands out the most out of all precious metals, with Russia accounting for 39% of global refined supply. Palladium's prices have already surged 24% year-to-date. And any additional supply disruptions from Russia could lead to an even more significant jump, Hamilton warned.

"Supply uncertainty, supplemented by recovering auto production, has seen palladium prices rally … while Russia is expected to make up 9%, 6%, 11%, and 8% of gold, silver, platinum, and rhodium supply, respectively," the report said.

On top of supply concerns, the safe-haven appeal of the precious metals is attracting more investors who are looking for safety amid a global stocks selloff.

"Safe-haven investment demand is also spurring prices, with gold pushing back up to ~$1,900/oz," Hamilton added.

Commodities like aluminum and nickel are also the ones to watch, especially in Europe and North America, Hamilton added.

"Russian supply is not necessarily as significant on a global scale but is well established into developed markets. And perhaps more importantly, these markets already have low inventory availability," he said. "The shift in trade flows should aid inventory cover in China, which is now a net importer of primary aluminum. However, European purchasers' concerns will be raised further, and we would expect premiums over LME price into both Europe and North America to push higher in the near term."