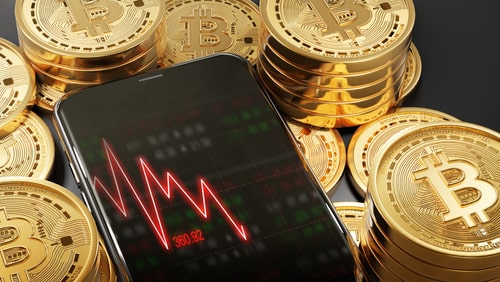 (Kitco News) The crypto market was reeling after Russia attacked Ukraine, with investors bailing on Bitcoin and Ethereum as markets sounded the alarm.

In the last 24 hours, the overall crypto market cap has lost more than $150 billion, according to Coinmarketcap data.

The drop in crypto coincided with a global selloff in equities as markets reacted to Russia’s full-scale invasion of Ukraine.

On Thursday, Russia proceeded with an attack on Ukraine by land, air, and sea in what already looks like one of the worst security crises in Europe since World War II.

Several Ukrainian cities were attacked with missiles, artillery, and air attacks as Russian troops moved into Ukraine from Russia, Belarus, and from the Black and Azov seas.

Fighting was reported in the regions of Sumy, Kharkiv, Kherson, Odessa and at a military airport near Kyiv, Reuters reported. Explosions, gunfire, and sirens were heard in Ukraine’s capital Kyiv.

“It became clear yesterday that President Putin had moved past the point of no return when Russia announced that leaders of the two breakaway regions in eastern Ukraine had asked for military aid to counter Ukrainian ‘aggression.’ Putin’s likely playbook that was set forth by Western intelligence has pretty much been spot on so far,” said BBH Global Currency Strategy head Win Thin.

The conflict is now a lot larger than just securing the two breakaway regions in eastern Ukraine, said Thin. “Any hopes for limited incursions or quick resolution have gone out the window … The bottom line is that markets should be braced for an extended period of high volatility, high commodity prices, and rising risks of stagflation globally,” he said.

Bitcoin has been losing its safe-haven appeal argument as it has continuously mirrored the stock movements throughout this Russia-Ukraine conflict.

“Bitcoin took a sharp fall to lows of $34,200 due to uncertainty in the world economy. The crypto market has followed traditional financial markets as the situation in Ukraine escalates to war. Altcoins also took a heavy hit, with most recording losses in excess of 10%,” GlobalBlock sales trader Jonas Luethy said. “Some have speculated that Russia might use Bitcoin to evade Western sanctions. This could be very negative for the general perception of cryptocurrency as it would give Western governments more legitimacy to crack down on digital assets.”

What could end up supporting Bitcoin in the future is its appeal as a safe haven against government intervention, Luethy added, referring to the Canadian government freezing more than 200 bank accounts in an effort to end convoy occupation.

“Canadian Prime Minister Justin Trudeau has ended the national state of emergency, which saw an unprecedented crackdown on bank accounts and an attempt at cracking down on crypto wallets. These draconian measures only highlighted the importance of Bitcoin and cryptocurrencies, and it comes as no shock that people are starting to see decentralized solutions as a safe haven from government intervention,” he said.