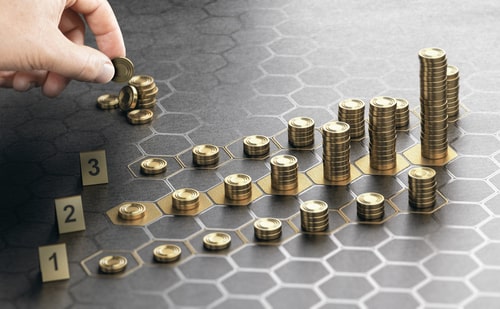 The precious metals market saw strong gains for most of the day following Russia's full-scale invasion of Ukraine. Gold hit a 1.5-year high of $1,976.50, and silver saw seven-month highs of $25.67.

However, both metals ended up losing ground and closing the session lower on the day as traders reassessed the situation. April Comex gold futures were last at $1,903.80, down 0.35% on the day, and March silver was at $24.21, down 1.40% on the day.

"The initial shock of what took place overnight with Russia and Ukraine sent all safe-haven metals higher, gold and silver specifically. Other commodities affected by Russia also moved up," RJO Futures senior markets strategist Peter Mooses told Kitco News. "And as the day progressed, things started to pull back. Margin calls had to be met, and traders had to get in and out of their positions due to the volatility the morning caused. There was profit-taking as well."

The bulk of losses came after U.S. President Joe Biden announced new sanctions against Russia, which targeted more of the country's banks, state-owned companies, and Russia's ability to do business in other currencies, including the dollar, euro, pound, and yen.

"This is a premeditated attack," Biden told reporters on Thursday. "Putin is the aggressor. Putin chose this war. And now he and his country will bear the consequences."

Markets were relieved to hear that U.S. forces would not fight in Ukraine and that new sanctions were signed not to hurt the energy market. "Our sanctions package is specifically designed to allow energy payments to continue," Biden said.

The president urged U.S. oil and gas companies not to exploit the Russia-Ukraine conflict to hike prices, adding that he will be releasing additional barrels of oil as conditions warrant.

Another boost to risk-on sentiment came after Biden decided not to impose sanctions on Putin himself or disconnect Russia from the SWIFT international banking system.

"Gold prices quickly tumbled after it became clear it would not have a catalyst to take out the $2,000 level today. Gold's afternoon selloff accelerated after President Biden unveiled the next round of sanctions, which many thought was not hard-hitting enough given last night's Russian invasion of Ukraine," Moya said. "The decision not to kick Russia out of the Swift banking system means both Russia and Europe won't suffer immediate additional economic pain."

However, precious metals investors should brace for more volatility ahead as Russia's invasion of Ukraine continues.

"Market reaction is saying the sanctions might help and we would not need the safe-haven as much as we thought overnight. That's why we saw some liquidation in the metals," Mooses said. "Tomorrow, we'll see what Russia's next move is. We should anticipate a lot of volatility, especially going into the weekend. There is a possible buying opportunity forming for anyone wanting to get back into the market and be long gold and silver."

Important to keep in mind that markets can surprise investors, especially in the post-pandemic environment. "We've seen over the past two years the market does not respond the way it used to. We saw with pandemic at times where we got bad news it made equities and other metals move higher and traders moved away from the metals as a safe haven," Mooses noted.