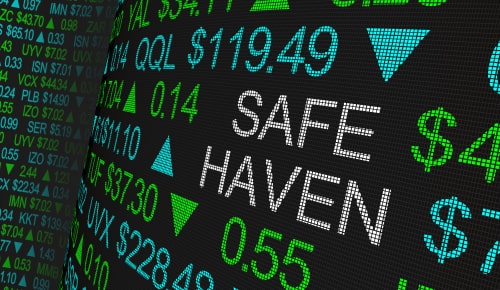 (Kitco News) Uncertainty created by Russia's assault on Ukraine is triggering a massive move into safe-haven metals as investors weigh the impact of sanctions against Russia.

Fears of supply disruptions, unintended economic consequences, and even more problematic inflation are pushing precious metals prices to new multi-month highs this week while Russia intensifies its attacks on Ukraine.

The marketplace is spooked by Russia's full-scale invasion of Ukraine, with the geopolitical situation looking worse by the day.

"Russian forces continue to bear down on Kyiv despite the crippling sanctions response from the West. Reports suggest a 40-mile-long Russian armored convoy is heading for Kyiv, while Ukraine claims Belarusian troops have also entered the country," said BBH Global Currency Strategy head Win Thin. "Putin is clearly signaling that he is undeterred by the Western sanctions so far, painful as they are for Russia. And so, we are left with our original belief that the Ukraine crisis is far from over and its full impact on the global economy has yet to be determined. That is why markets are back in risk-off mode today."

The top performer on Tuesday was silver, which rallied nearly 5% on the day as prices hit the highest levels since August. Silver is known as the more volatile metal that follows in the footsteps of gold's price rallies. May Comex silver futures were last at $25.53, up 4.78% on the day.

"Gold (and thus Silver) remain a conundrum with mixed interpretations around ongoing escalating sanctions on Russia and its Central Bank. The market is trying to balance the actual impact to metals flows/supply versus the impact on sentiment/fear (expected war premiums) and impact on inflation (added inflation premium)," said MKS PAMP SA head of Metals Strategy Nicky Shiels.

Bullish factors working in favor of both gold and silver markets include stagflation fears and more gold buying from investors and central banks. "Renewed SWIFT chaos, cyber-attacks, destabilizing FX markets & inflation = beginning of a change in the monetary & financial system = gold is a safe store of value until clarity," Shiels said.

Palladium had an extremely volatile session on Tuesday. After rising above $2,700 an ounce, the precious metal retreated $200 but still traded higher on the day. At the time of writing, March futures were at $2,541.00, up 1.62% on the day.

Analysts have identified palladium as one of the top commodities to watch during the Russia-Ukraine conflict because Russia accounts for 39% of the global refined supply.

"The reciprocal sanctions are causing ever greater challenges for the transport of palladium. The EU has closed its air space to Russian aircraft, while Russia has closed itself to many foreign airlines. Palladium is usually transported as cargo on board passenger planes. Russian mining companies such as the world's largest palladium producer are examining alternative transport routes," said Commerzbank analyst Daniel Briesemann. "Palladium prices will remain high or even rise further in the short term."

Supply concerns will continue to boost commodities, including precious metals, according to Commerzbank.

"The far-reaching sanctions are likely to significantly reduce demand for commodities from Russia even though the latter are not yet directly affected by the punitive measures imposed by the West. This is because more and more commodities consumers are reluctant to buy oil, liquefied natural gas, coal, metals and grains from Russia due to the uncertain legal situation," said Commerzbank analyst Carsten Fritsch.