Is Russia 'panic gold buying'? And is panic-selling about to kick in? 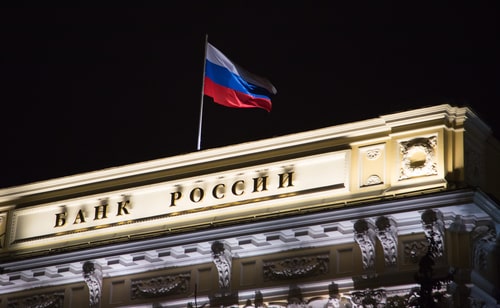 (Kitco News) The Bank of Russia said it would be restarting its official gold purchases after a two-year hiatus. But some analysts warn that gold-selling is not that far off as Russia battles sanctions and a plummeting ruble.

On Sunday, Russia’s central bank announced that it would resume its gold purchases from the domestic market as it attempts to establish some financial stability amid a barrage of new sanctions following Moscow’s full-scale invasion of Ukraine.

In the meantime, gold has rallied in response to Russia’s invasion of Ukraine, with investors fleeing to the safe-haven metal for protection. In February, prices rose $120, with April Comex gold futures last trading at $1,926.40 an ounce.

On top of the geopolitical uncertainty, more central bank gold buying is usually a good price driver. However, some analysts warn that Russia’s additional gold purchases could be just a precursor to significant selling.

Russia could be resuming purchases of its domestic gold to boost its own war chest, which is a short-term bullish driver for the metal, but it is likely only a matter of time before Russia starts selling its gold reserves, said MKS PAMP SA head of metals strategy Nicky Shiels.

“[Russia] will continue to usurp [its] own production of Gold (and Palladium – ‘precious metals’), to bolster the war chest. That’s likely to be viewed as initially bullish by the market (‘panic gold buying’), but the purpose of buying gold (in the domestic market), is to monetize it when required,” Shiels said in a note. “One builds a war chest of this size ($140bn, 74mn oz of Gold) for times like these.”

And the fear of Russia selling its gold reserves in large quantities will weigh heavily on the market going forward, especially if the ruble continues to plunge, Shiels pointed out.

“It’s the impact to sentiment … the fear over potential CB sales may overhang the market after the dust settles/further escalation premium is priced in,” she said. “The RUB is also likely to collapse further, which will also make it even more appetizing to sell metal priced in local currency terms to whoever needs/wants it.”

Russia’s decision to resume gold purchases comes almost two years after its central bank suspended its domestic gold-buying program. This was at a time when gold prices soared at the onset of the pandemic.

Prior to that, Russia spent years boosting its gold reserves. Last year, the value of Russian gold in its forex reserves had surpassed the country’s U.S. dollar holdings for the first time ever. At the end of June 2020, the country’s total gold reserves as part of the foreign exchange holdings were up at 22.9%.

This represents Russian President Vladimir Putin’s border strategy to de-dollarize the Russian economy and protect it from further sanctions.

According to the latest IMF data, Russia holds nearly 2,300 tonnes of gold as of the end of January — the fifth-biggest sovereign gold owner.