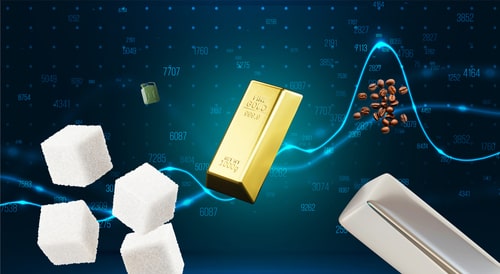 (Kitco News) Inflation in the U.S. could surge to 10% before hitting its peak, forcing the Federal Reserve to be more aggressive, said DoubleLine Capital CEO Jeffrey Gundlach, adding that he prefers to play broader commodities over gold.

"Some people are bringing out the narrative that with the war in Ukraine, the Fed is less likely to be as aggressive in raising rates. I completely disagree with that," Gundlach said during his webcast on Tuesday.

With oil over $120 a barrel, fertilizer prices exploding, and short supplies of natural gas, wheat, and corn, the inflation rate will not peak out at 7.5%, Gundlach pointed out.

"It depends where commodities go, but I think we could be headed to a 10% CPI … before we get any relaxation," he added. "I can't possibly see how the Fed can pull back on interest rate increases. Their job is to fight inflation. They've done a terrible job of it so far."

The surge in commodities could also be a pre-recessionary warning sign, according to Gundlach, who cited similarities with the global financial crisis.

"The commodity index was going up already from the middle of 2020, but then there's just gone absolutely vertical with gaps and runaway gaps … [It's] on absolutely on fire. The magnitude of this move is almost the same size as the magnitude of the move going into the global financial crisis," he said. "And I bring that up again because a big up in commodities, in particular energy, is often a catalyst and in a post-mortem is determined to be part of the causes behind recessionary periods."

Gundlach stated that he is getting more concerned about the potential of a recession, noting that this historic move in commodities reminds him of the 1970s.

In light of this, Gundlach said he prefers investing in broader commodities over gold right now, predicting a much larger move up in the long term.

When answering questions from viewers, the DoubleLine Capital CEO admitted that gold was finally starting to shine as it made its way back towards $2,000. However, he replied that gold is currently not a buy for him. "Commodities broadly are a better investment than gold," he added, adding that it is all because of the price potential.

Gundlach explained: "The trade location for commodities broadly is not great in the short term, but once the commodities bottom out versus the S&P 500's total return, [the outperformance] tends to go on for a long time. And it tends to be a very large amount. Sometimes as much as 8X or 9X outperformance from the bottom to the top of the commodity cycle. We've had a big commodity move, but it is not eight or nine times stocks. And I think the current cycle has turned."

And even though Gundlach is confident that investors are better off with commodities, he owns gold himself, projecting that a significant move higher is coming for the precious metal.

"If you're a true long-term investor and you think gold fits in your portfolio, I do not have a problem owning gold. I own gold presently, and I haven't added to it in a long time, but I do think that when the dollar falls, which will take the next recession. This is not a short-term recommendation by any means. But I do think that gold will have a good purchasing power protection aspect," he said.