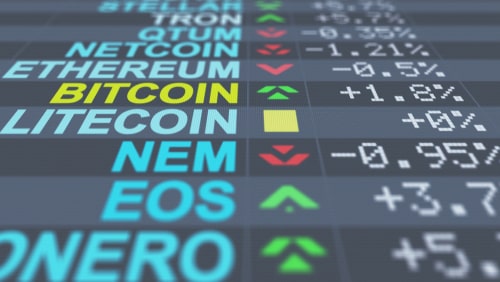 (Kitco News) Bitcoin saw an impressive move higher after U.S. President Joe Biden signed an executive order that called on key government agencies to identify the risks and benefits of cryptocurrencies and the hazards associated with creating the central bank digital dollar.

The order outlined "the first-ever, whole-of-government approach to addressing the risks and harnessing the potential benefits of digital assets and their underlying technology," according to a White House fact sheet.

This order was widely expected and kept the crypto participants on edge. The newly signed measure asked the Treasury Department, the Commerce Department and other central agencies to publish reports on "the future of money" and the role crypto plays in this.

The crypto space reacted positively to the news as Biden's message was viewed as the U.S. government wanting to regulate digital assets in a way that would ensure long-term growth.

"The United States must maintain technological leadership in this rapidly growing space, supporting innovation while mitigating the risks for consumers, businesses, the broader financial system, and the climate. And, it must play a leading role in international engagement and global governance of digital assets consistent with democratic values and U.S. global competitiveness," the White House's fact sheet stated.

"The order seems relatively benign, hence giving the market some clarity. This is the 'first ever, whole-of-government' approach to overseeing the sector in the U.S. as it calls on the Treasury, Financial Stability Oversight Council, Federal Reserve and national security agencies to work on relevant sections of the crypto ecosystem," said GlobalBlock analyst Marcus Sotiriou.

Treasury Secretary Janet Yellen's comments regarding the order were also viewed as largely supportive of the space.

"President Biden's… approach will support responsible innovation that could result in substantial benefits for the nation, consumers, and businesses," Yellen said in a statement. "It will also address risks related to illicit finance, protecting consumers and investors, and preventing threats to the financial system and broader economy."

Yellen added that the Treasury Department would produce a report on the future of money and payment systems. "We'll also convene the Financial Stability Oversight Council to evaluate the potential financial stability risks of digital assets and assess whether appropriate safeguards are in place," she said.

Bitcoin's Wednesday rally was also driven by a rebound in risk-on sentiment on Wall Street following an intensive selloff that was triggered by Russia's invasion of Ukraine almost two weeks ago.

"Equity markets have a bid today as the markets are clinging to the slightest glimmer of hope of a possible step towards de-escalation when the Ukrainian and Russian finance ministers meet in Turkey tomorrow," said Commonwealth Financial Network global investment strategist Anu Gaggar.

A day earlier, Ukrainian President Volodymyr Zelenskiy said he 'cooled down' regarding the question of his country joining NATO.