What's next for gold price after making a run for record highs? Fed, Ukraine updates on deck 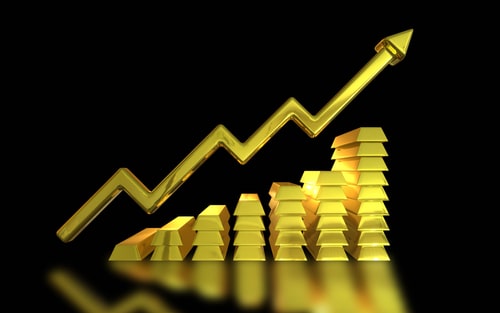 (Kitco News) The Federal Reserve's interest rate decision and developments in Ukraine will dominate gold's price direction next week after the precious metal made a run for record highs.

Gold rallied on its safe-haven appeal this week as sanctions against Russia were stepped up to import bans and the war in Ukraine escalated, creating chaos in the commodities space. April Comex gold futures were last trading at $1,990.50 an ounce after briefly rising above $2,070 an ounce earlier in the week.

"Gold will continue to hover around $2,000 in the short-term. If gold closes at $1,980 an ounce, then I am bullish. If gold rises to $2,010, then I am neutral," OANDA senior market analyst Edward Moya told Kitco News.

The trading range for gold remains pretty broad due to the current volatility in many financial markets. The two leading drivers will be the Federal Reserve's meeting on Wednesday and any new developments regarding sanctions against Russia and the war in Ukraine.

"Gold could trade over the next week between $1,960 and $2,050. It is looking at a pretty wide range given the sensitivity of the situation in Ukraine. And we have the Fed policy meeting, which could provide some big shifts as to how the U.S. central bank will address the inflation outlook and more importantly what will be the path of tightening going forward," Moya said.

Wednesday's afternoon announcement will be followed by Fed Chair Jerome Powell's press conference. All eyes will be on the new economic projections, the dot plot, and Powell's take on the "unintended consequences" of the conflict in Ukraine.

"Powell has to provide clarity. He needs to set market expectations. After this, we'll get a better sense if there could be a risk of a super-sized rate hike over the summer."

Markets are currently pricing in a 95.1% chance of a 25-basis-point hike next week. These expectations were further cemented by the recent inflation data, which showed the U.S. Consumer Price Index (CPI) rising to 7.9% in February, a new 40-year high. Also, Powell testified last week that he would be supporting a traditional 25-basis-point hike at the March meeting.

"Investors have done a U-turn in their assessment of what Russia's invasion of Ukraine will mean for U.S. monetary policy ahead. A brief flirtation with the idea that the war's economic costs would temper the rate hike path has been quickly reversed, with the February CPI data being a further reminder that inflation is breaking out in just about every major category of goods and services," said CIBC World Markets chief economist Avery Shenfeld.

Capital Economics is forecasting new projections to point to at least five interest rate hikes in 2021 and an additional four rate hikes in 2023. This would take the Fed Funds rate to between 2.25% and 2.50%.

"Fed Chair Jerome Powell may offer more details in his press conference about the Fed's plans for quantitative tightening (QT), but we don't expect QT to be launched until closer to the middle of this year," said Capital Economics chief North America economist Paul Ashworth.

What about gold's pullback after hitting $2,000?

Consolidation after rising above $2,000 an ounce is a good thing for gold, said RJO Futures senior market strategist Frank Cholly.

"A pullback correction is good. It is testing the strength of the market. Gold will continue to march higher to the $2,050 area. I don't think that a rate hike next week is going to hurt the market," Cholly told Kitco News. "Now that we have the big breakout, I remain bullish. The uptrend is still intact. And right now, it is a good buying opportunity."

Gold will easily get back to $2,050 an ounce level in the short-term, he added. Plus, the Fed is now unlikely to surprise with a 50-basis-point hike since it has signaled a more cautious approach when raising rates to avoid throwing the economy into a recession.

Cholly also does not see the war in Ukraine lasting for many months as many fear, which could potentially see gold return to $1,900.

"There will be some resolution sooner rather than later. This is not going at all how Putin planned," he said. "Possible that we have a pullback to $1,900. But even before February 24, when Russia invaded Ukraine, the gold market was starting to take on a bullish tone. Now that we've broken out and are above these levels, I don't think gold is going back down to $1,800."