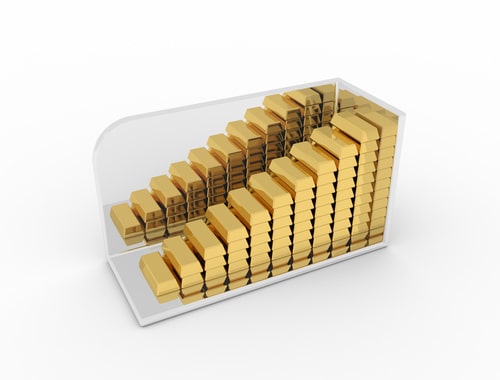 (Kitco News) Could the year-end scenario be gold at $2,500 and crude oil at $50? Gold is one of the assets that could benefit the most this year, while oil is still facing prospects of crippling demand in the future, according to Bloomberg Intelligence.

"Markets may be facing an extended risk-off reversion period, which we see as essential to reduce inflation pressures. Gold stands to be a primary beneficiary, potentially along with U.S. Treasury long bonds and Bitcoin," said Bloomberg Intelligence senior commodity strategist Mike McGlone. "Gold is poised to cross the $2,000 rubicon … Potential end game for 2022 - $50 crude, $2,500 gold, recession."

Gold has been trading in a narrowing wedge pattern, and these have the habit of breaking out to the upside, McGlone pointed out.

High inflation, surging commodities, risk-off sentiment in U.S. equities are all adding to gold's case at the moment.

"We view the metal as a leading potential 2022 end-game performer, notably when commodities priced for supply shocks succumb to inevitable demand destruction," McGlone said. We see gold gaining store-of-value demand, along with Bitcoin, from portfolio managers seeking alternatives for recession risks and overdue reversion in equities."

Gold's sticky resistance level of $2,000 an ounce will likely become its "enduring support" level, the senior commodity strategist stated. This would be a major development for the precious metal, which has viewed this level as strong resistance for the past two years.

"We believe gold is more likely to prevail in the longer term, as a key headwind may be reverting -- the seemingly unstoppable appreciation of the U.S. stock market," McGlone said. "The S&P 500 may be beginning a similar mean-reversion process as in 2008, but from a much more extended condition. In 2007, the stock index peaked from about 24% above its 200-week moving average. The high in November was about 45% above this mean."

However, the situation looks drastically different for the currently surging crude oil prices, with Bloomberg Intelligence not ruling out a sharp selloff to $50.

"This year may end like 2008 and refresh an enduring bull market for gold vs. bear market for crude oil. What's different from 14 years ago is that the war in Ukraine will accelerate the process of technology replacing fossil fuels, and the extended stock market faces Federal Reserve restraint. Recession is a top ingredient for fighting inflation," McGlone added.

The 2022 price highs for crude oil may be the peaks set for decades due to crippling demand in the future, according to the note.

"This is far from surprising, as it's the typical outcome from crude price spikes -- the 2008 all-time high near $145 a barrel as the most recent example. The West Texas Intermediate future high of $130.50 on March 7 was roughly equivalent to the 1990 Gulf War and 2008 peaks when measured vs. the 60-month average," McGlone described. "Crude oil is at greater risk of doing what it has following high-velocity spikes -- reverting lower. Ley retracement levels to look for -- about $59 (the 60-month mean) and $32 (the average U.S. cost of production). About $30 would match the typical 80% correction since 2008."