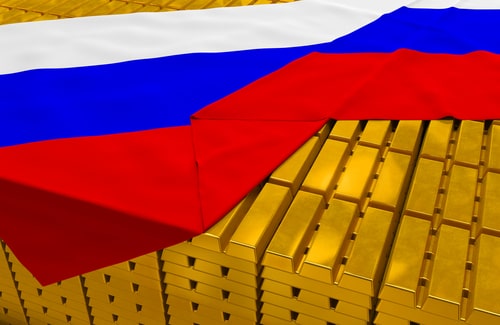 (Kitco News) Major banks in Russia are reporting a surge in demand for gold as Russians rush to invest in bullion and coins to protect their savings.

The surge in demand began after Russia invaded Ukraine — in the last week of February and the first two weeks of March.

Russia's central bank even announced that it is halting its official gold purchases from local banks to leave the inventory for regular consumers.

"Currently, households' demand for buying physical gold in bars has increased, driven, in particular, by the abolition of value-added tax on these operations," the central bank said in a statement on Monday.

Russian President Vladimir Putin also signed a law scrapping the 20% value-added tax on metals purchases on March 9. This is meant to encourage buying of precious metals over foreign currencies when the ruble is collapsing.

"Precious metals are a traditional defensive asset that helps to feel confident in any economic situation. At the moment, our clients want to receive a physical guarantee of the safety of their savings, and bullion is an excellent tool for this," Russian media cited Sberbank's director of the 'Borrow and Save' division Sergei Shirokov as saying.

Russia's Ministry of Finance has referred to gold as an "ideal alternative" to the U.S. dollar.

Sberbank, Russia's largest financial institution, reported that demand for gold and palladium has quadrupled in the last few weeks.

VTB also said that the most popular precious metal being bought is gold, followed by silver, palladium, and platinum, Russian media reported.

At the beginning of March, Russia’s central bank said it was restarting its official gold purchases after a two-year hiatus.

The announcement came after Western sanctions froze almost half of Russia's foreign-currency reserves. Russia still has access to is gold and yuan. But trading gold has become more difficult due to sanctions.

According to the latest IMF data, Russia holds nearly 2,300 tonnes of gold as of the end of January — the fifth-biggest sovereign gold owner.