'Nothing but a series of black swan events' since mid-2019, what shock is next? Goehring & Rozencwajg weighs in 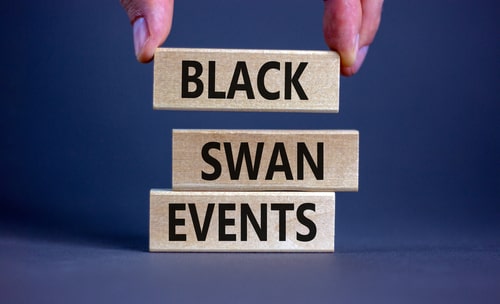 (Kitco News) Markets have been busy digesting a series of black swan events since mid-2019, but the shock streak might not be over, according to Goehring & Rozencwajg Associates managing partner Leigh Goehring.

And with inflation still accelerating, commodities surging, and global central banks hiking rates, there are many red flags out there, including a possible inversion of the yield curve, Goehring told Kitco News.

At its March meeting, the Federal Reserve raised rates for the first time since 2018 and signaled that it could hike by 50 basis points at a time if needed. The big worry with such an aggressive tightening schedule is slower economic growth and unintended consequences from the war in Ukraine.

The three areas that Goehring is watching for a potential black swan event are the agriculture, oil, and finance sectors, with the latter looking like the most probable dangerous scenario.

"When the Fed starts to raise rates, it could unearth some problem in the financial system. For example, some huge bank with massive derivative exposure gets stressed by higher rates that no one thought about. And it creates a huge financial problem," Goehring described. "I've always been a big believer that the problem with raising rates in a highly leveraged economy is going to be all sorts of unbeknownst events that could occur."

However, when the Fed tried to tighten back in 2018, it was forced to reverse everything because of liquidity issues. "Maybe the black swan won't be in agriculture or oil but in a bizarre derivative financial instrument. And that could prevent the Fed from further raising rates, and maybe the central bank will have to go back to easing," Goehring noted.

Nevertheless, there are still serious risks surrounding the agriculture market. According to Goehring, the world has been on the verge of an agricultural crisis. And now there is a war in Ukraine.

"Ukraine has been known as the world's breadbasket. It is a huge supplier of corn and wheat to the global market. And now there's talk that farmers won't be able to plant the fields. Whether that happens or not, I don't know. But maybe that will be a black swan event," he said.

"We've come to rely on the growth in the U.S. oil shales. There are a couple of problems here. Outside of the U S. shales, global oil growth has almost come to a standstill. In most parts of the non-Arabic world, oil production now turned negative," he explained. "The second is how long could this growth in U.S. shales last? Can they grow another 14 million barrels a day between now and 2030? And our analysis shows: 'absolutely not.' Like any oil field, you drill it up very rapidly, you then suffer from depletion. And that's what's going to happen to all the oil shales."

On top of that, the shock of Russia invading Ukraine has forced the world to realize that there hasn't been enough investment made globally in the upstream oil business, Goehring added.

One certainty in all of this is the commodity bull market, which is not going away, said Goehring.

The bull market will last between now and 2030 and will be supported by a new layer of investment demand from tech-stock players.

"Oversold commodity sector and support from the demand-supply backdrop will see new capital find a home here. We will be shocked as new money flows into commodities and what it will do to them," Goehring said. "When this cycle is done (2028-32) — two things would have happened, someone will try to corner the silver market again, and the Dow Jones and price of gold will cross again."