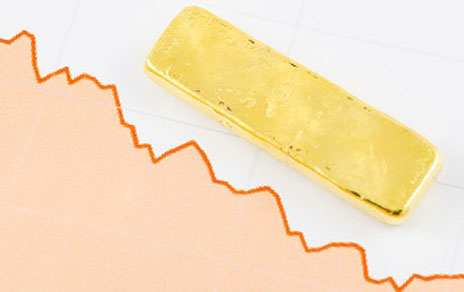 (Kitco News) - The gold market is being hit with significant selling pressure as the price falls below $1,900 an ounce. Analysts are warning traders and investors that the precious metal has room to move lower in the near term.

According to some analysts, gold's safe-haven demand is taking a significant hit as Russia and Ukraine start new peace talks in Istanbul, Turkey. According to reports Ukraine has proposed adopting a neutral status in exchange for security guarantees. At the same time Russia has also stated that it will "dramatically" reduce its military operations near Kyiv and Chernihiv.

Analysts note that the latest peace talks are creating a "risk-on" environment as equity markets opened the North American session up 1%.

However, despite Tuesday's selling pressure, Daniel Briesemann, precious metals analyst at Commerzbank said that that gold's rally is not over yet, especially if Russia and Ukraine can't agree to a cease-fire.

Along with waning safe-haven demand for gold , some analysts are also closely watching the U.S. dollar and Treasuries. The shifting risk sentiment also creates some selling pressure in the U.S. dollar index, which has fallen to a one-week low of 98.28, down 0.8% on the day. At the same time, the yield on U.S. 10-year bonds is trading at 2.45%, also down nearly 1% on the day.

However, some analysts have said that positive U.S. economic data could provide new momentum for the greenback and push bond yields higher. Markets are waiting for Friday for the release of March's nonfarm payrolls reports. Economists are expecting the economy to have created 485,000 jobs.

"This could be a rough week for gold as renewed peace talks rekindle risk appetite. An appreciating dollar and rising Treasury yields are likely to rub salt into the wound, sending the precious metal on a slippery decline," said Lukman Otunuga, senior research analyst at FXTM.

Lukman said that in the current environment, gold prices could fall to the next major support level at $1,875 an ounce.

Justin McQueen, market strategist at DailyFX.com, warned that if support at $1,880 doesn't hold, prices could drop as low as $1,830 an ounce.

Analysts also note that gold is seeing technical weakness as the price was unable to hold above $1,950 an ounce at the start of the week. Ole Hansen, head of commodity strategy at Saxo Bank, said that the failed breakout was "a significant disappointment."

"The entire breakout rally prompted by the Russian invasion of Ukraine is now threatened if the 1,890-1,900 area doesn't hold," he said.

Although the gold market has seen significant volatility lately, some analysts aren't ready to give up on the precious metal. Many analysts have said that looking past the conflict in Eastern Europe, gold will play an essential role as a portfolio diversifier as inflation pressures worldwide continue to rise.

Bill Baruch, president of Blue Line Futures, said he is neutral on gold in the near-term as peace talks take some momentum away from gold. However, He added that gold’s long-term outlook remains bullish.

“We maintain our previous statement, that we are bullish Gold due to the broader landscape of slower growth, Fed tightening, and inflation, and Russia-Ukraine was merely a near-term supportive factor, pulling forward some gains,” he said. “We do advise caution in trying to pick a bottom in the near-term. Traders must stay cautious as they navigate not only today’s news flow, but the economic data as the week unfolds, culminating with Nonfarm Payrolls on Friday.”