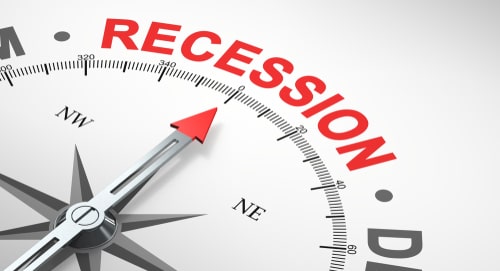 (Kitco News) The U.S. economy will experience a "major hit" in 2023 and 2024 as the Federal Reserve slows growth prospects with its aggressive tightening plan to fight inflation, said Deutsche Bank.

Eight percent inflation will force the Fed into a hawkish stance of higher rates and tighter monetary policy. But the end result looks to be recessionary, Deutsche Bank economists wrote in a note Tuesday.

"The U.S. economy is expected to take a major hit from the extra Fed tightening by late next year and early 2024," the economists said. "We see two negative quarters of growth and a more than 1.5% pt rise in the U.S. unemployment rate, developments that clearly qualify as a recession, albeit a moderate one."

Even though the potential recession is described as moderate, risks remain to the downside, according to the note.

"Growth is seen recovering thereafter as inflation recedes and the Fed reverses some of its rate hikes," the economists added. "We acknowledge huge uncertainty around these forecasts, but also note that the risks to the downside and of a deeper downturn are considerable."

All eyes are on Wednesday's release of the FOMC meeting minutes from March. Markets are closely watching for hints on whether a 50-basis-point hike will be warranted in May and any clues around the Fed's upcoming balance sheet reduction.

Following the March meeting, Federal Reserve Chair Jerome Powell took on even a more hawkish stance as the U.S. central bank raised rates by 25 basis points for the first time since 2018 and projected six more rate hikes in 2022.

Powell said that the U.S. economy "can handle" tighter monetary policy as the U.S. central bank focuses on its fight against high inflation.

And with more rate hikes right around the corner, the fed's funds rate would potentially rise to 1.9% by the end of 2022 and then climb to 2.8% by the end of 2023, Powell stated. "The FOMC acutely feels [the need] to restore price stability," and it is prepared to use all of its tools, Powell explained in March.

Deutsche Bank projects for rates to hit 3.5% in 2023 and for the Fed's balance sheet reduction to represent an additional 0.75% in rate increases.

Market participants are currently estimating a 77.7% chance of a 50-basis-point rate hike at the FOMC meeting in May, according to the CME FedWatch Tool.

Deutsche Bank is one of the first major banks to project a recession in the U.S. The bank's note also came after the 2-year and 10-year Treasury yields inverted — a recessionary warning sign to many market participants.

The worst-case scenario will unfold if inflation expectations get de-anchored, Deutsche Bank added. "Should either of these assumptions prove incorrect, the inflation pressure, central bank tightening, and economic downturns could all be more intense than in our baseline projection," the economists pointed out.