With 1,728 ktonnes of copper mined in 2021 (including minority interests in El Abra and Anglo American Sur), Chilean mining behemoth Codelco is the largest copper producer worldwide. The company’s attributable copper output was flat compared to 2020 (1,727 ktonnes). Despite two years of pandemic, Codelco has maintained its targeted level of production. Moreover, the company continues moving forward its advanced projects, with Andina Transfer System and Rajo Inca to be in full production phase in 2022 and 2023, respectively.

Freeport-McMoRan is second with 1,407 ktonnes of copper (attributable) produced in 2021, an increase of 19% compared to 2020, primarily reflecting the ramp-up of underground mining at Grasberg.

BHP Billiton sits fourth with 1,022 ktonnes of attributable copper output in 2021 (calendar year ended 31 December 2021). BHP’s copper production decreased compared to 2020 (1,107 ktonnes) primarily due to lower volumes at Olympic Dam because of the planned smelter maintenance campaign completed in January 2022. This was partially offset by higher volumes at Antamina.

Southern Copper is fifth. The company’s 2021 copper production decreased 4.3% year-over-year to 958 ktonnes. However, the company said that this result was 1.6% higher than its annual target of 943 ktonnes. With the exception of the Cuajone operation, where production levels were similar to those registered in 2020, a decrease in yearly copper production was reported by all of the company’s mines due to a temporary drop in ore grades and recoveries. 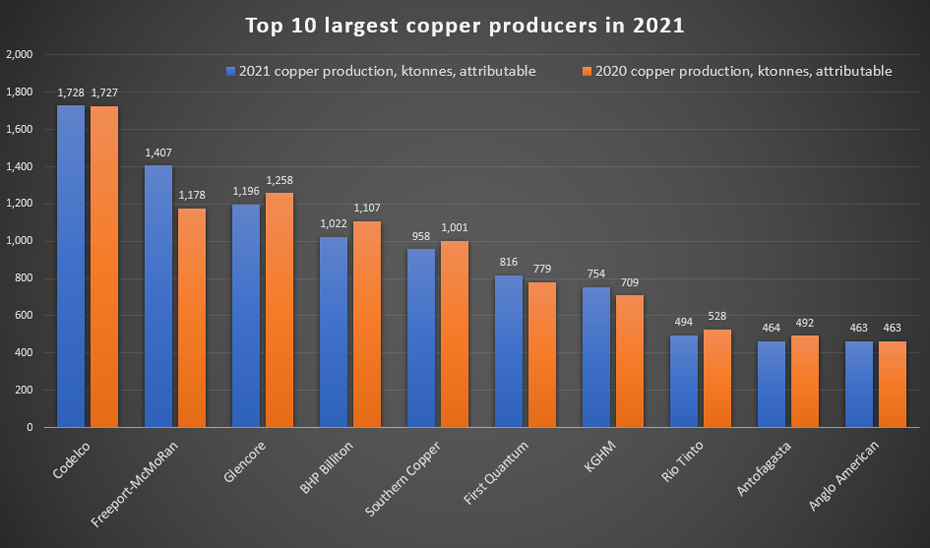