Russia cut its USD holdings prior to invading Ukraine, has enough gold and yuan despite sanctions, says country's central bank 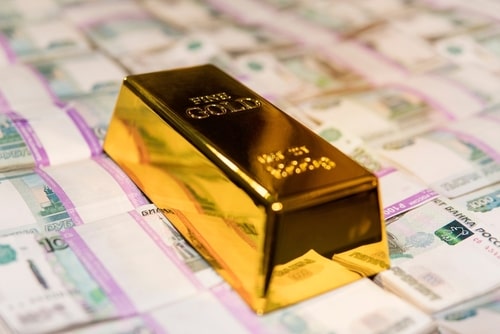 (Kitco News) Russia's central bank said it cut its holdings of U.S. dollars even further before invading Ukraine in February, adding that it has enough yuan and gold despite the impact of Western sanctions.

The comments were made by the central bank Governor Elvira Nabiullina in her annual report to parliament Monday.

"Today, even though Western countries have frozen our reserves in their currencies, Russia still has a sufficient amount of reserves in gold and Chinese yuan," said Nabiullina.

The West introduced sanctions against Russia in response to its invasion of Ukraine on February 24, including limits on the Russian central bank's reserves. Because of this, around half of Russia's $642 billion in reserves got frozen.

Nabiullina noted that economic pain is to be expected, but she estimated an eventual recovery.

"As the process of adjustment to the new conditions is complicated, it will inevitably cause a decline in GDP, but the Russian economy will be able to return to the growth path, develop production, create new jobs, and increase domestic investment," she said in the report. "Financial stability and predictable dropping inflation are the key prerequisites for this, and the Bank of Russia will take all appropriate measures to achieve this."

A year ago, Russia's central bank announced that the value of Russian gold in its forex reserves had surpassed the country's U.S. dollar holdings for the first time, which is all part of Russia's multi-year de-dollarization plan.