Only around 30% of annual supply comes from primary silver mines while more than a third is produced at lead/zinc operations and a further 20% from copper mines. The polymetallic ore deposits from which silver are recovered account for more than two-thirds of the world’s silver resources.

3. Dukat, Russia. 18.8 Moz.
Dukat silver mine is one of Polymetal’s first and original assets. It is the largest primary silver operation in Russia and Polymetal’s flagship operation. Silver output at Dukat increased by 3%, from 18.2 million ounces in 2020 to 18.8 million in 2021.

4. Antamina, Peru. 18.2 Moz.
Antamina mine is a large copper-zinc-molybdenum-silver-lead operation, located in the Andes mountains 270 kilometres north of Lima, Peru. The deposit is located at an average elevation of 4,200 metres. The owners are BHP Billiton plc (33.75%), Glencore plc (33.75%), Teck (22.5%) and Mitsubishi Corporation (10%). The mine is an open pit, truck/shovel operation. A 302-kilometre slurry concentrate pipeline transports copper and zinc concentrates to the port for shipment to smelters and refineries world-wide.

5. San Julian, Mexico. 16.8 Moz.
The San Julián silver-gold mine in Mexico is Fresnillo’s cornerstone project. The geological potential identified in the region thus far may be sufficient to establish a new mining district in the future. The San Julián mine includes two plants: i) a dynamic leaching plant to treat ore from the veins and ii) a flotation plant with 6,000 tpd capacity to process ore from the disseminated body. Full year silver production increased 26% vs. FY20 due to a higher than expected ore grade.

6. Cannington, Australia. 14.4 Moz.
South32’s Cannington silver-lead-zinc mine, located in north-west Queensland, was a long-time undisputed leader in silver production, with a record 44 million ounces of silver achieved in 2005. Since then, silver output dropped significantly due to reduced silver grades, and Cannington finally lost its number one position in recent years. In 2021 calendar year, silver production at the mine increased 24% to 14.4 Moz.

7. Saucito, Mexico. 12.4 Moz.
Located in Zacatecas, Mexico, 8km SW of the Fresnillo mine, Saucito is one of Fresnillo’s most important assets. Full year 2021 silver production of 12.4 Moz decreased 19.9% vs. FY20 due to a decrease in volume of ore processed and lower ore grade due mainly to the instability issues and the adverse impact of the labour reform.

8. Fresnillo, Mexico. 12 Moz.
Fresnillo’s eponymous mine is one of the world’s oldest continuously operating mines. It is remarkable that mining operations have been recorded at the site as far back as 1554. Full year 2021 silver production was down 8.2% due to a lower volume of ore processed and lower ore grade.

9. Collahuasi, Chile. 9.6 Moz.
The Collahuasi mine is a large copper mine located at high altitude in the north of Chile in the Tarapaca Region. The mine is operated by a joint venture company Compañía Minera Doña Inés de Collahuasi, in which Anglo American plc and Glencore each hold 44% while the remaining 12% is held by Japan Collahuasi Resources B.V.

10. Greens Creek, USA. 9.2 Moz.
Hecla’s 100%-owned and operated Greens Creek mine in southeast Alaska is one of the largest and lowest-cost primary silver mines in the world. The Greens Creek orebody contains silver, zinc, gold and lead, and lies within the Admiralty Island National Monument, an environmentally sensitive area. Greens Creek is an underground mine which produces approximately 2,100 to 2,300 tons of ore per day. The primary mining methods are cut and fill and longhole stoping. 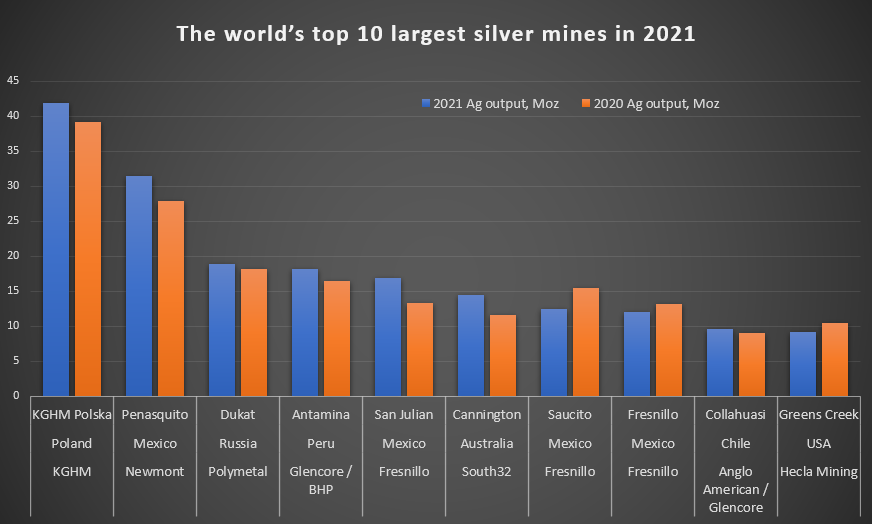