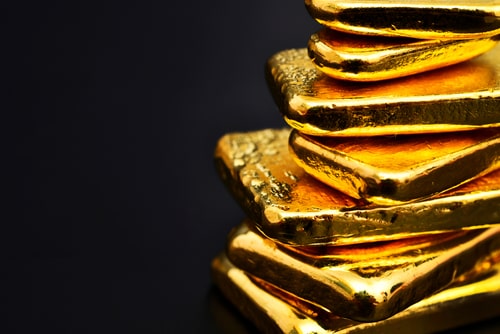 (Kitco News) Gold tested a critical level this week on its way to $2,000, but one of its main obstacles remains a strong U.S. dollar, according to analysts.

Despite a selloff during the week's last trading day, gold is still up 1.5%, with June Comex gold futures last trading at $1,974.6 after rising above $1,985 an ounce a day earlier.

"Gold is receiving strong haven demand. But we see the same thing with the U.S. dollar. That will be a potential headwind for gold. The USD is being viewed as the 'cleanest dirty shirt in the laundry.' Investors are looking for safety outside of some of the chaos and uncertainty that we see in the markets. The argument is similar to gold — it is viewed as a trusted place," Gainesville Coins precious metals expert Everett Millman told Kitco News.

Escalating tensions further was Russia threatening to deploy nuclear weapons and hypersonic missiles if Sweden and Finland joined NATO. The comments came from Dmitry Medvedev, deputy chairman of Russia's Security Council. "There can be no more talk of any nuclear-free status for the Baltic - the balance must be restored," said Medvedev, who is also former Russian president (2008-2012).

This comes just a day after U.S. President Joe Biden announced he is providing Ukraine with an additional $800 million worth of firepower, including heavy artillery.

Renewed pressure from the stronger U.S. dollar could keep gold stuck in a trading range until the index falls back below 100.

"The dollar had quite the run. There was the belief that the rally would pause at the 100 level. But we are seeing further bullish momentum. Short-term, the dollar could appreciate more. That's why I'm neutral on gold. Fundamentals and still intact for bullish momentum in gold, but a stronger dollar could limit [the metal's prospects for now]," OANDA senior market analyst Edward Moya told Kitco News.

"The dollar rallied to some extent because we've seen yields across the curve move up as well. The 2s, 10s, and 30s are all moving up. This is an important factor in driving prices here. Real rates are moving up here as well," Melek said.

On its way to $2,000 an ounce, gold will have a harder time breaching the $1,975 an ounce level than the $2,000 one, said RJO Futures senior market strategist Frank Cholly.

"The dollar is probably the biggest factor right now. If the dollar dips back down towards 99-98 range, that will make it a lot easier for gold to break through $2,000, which will eventually happen," Cholly told Kitco News.

The $2,000 level could be within reach in the next month or so, but traders should be ready for volatility in either direction, Millman added. "In terms of factors that would drive it, it won't take much. The level of anxiety and fear in markets justifies that price level. By the same token, if there is a resolution to the conflict in Ukraine or inflation expectations come down, gold will drop to $1,900," he noted.

The gold market will also be paying very close attention to guidance from central banks around the world, especially to the Bank of England interest rate announcement and the upcoming Federal Reserve meeting in May.

Markets will continue to price in aggressive tightening cycles, kicked off by the Bank of Canada's oversized 50 basis point hike on Wednesday.

The Fed might be perceived as behind the curve on inflation as it focuses on the core inflation measure instead of the headline number, which could be a mistake, Melek pointed out. "We saw the largest increase in inflation in the U.S. since 1981, with inflation accelerating to 8.5% in March. But the core, which excludes food and energy, looked better. Will this convince some traders that the U.S. central bank may not need to be as aggressive?" he asked.