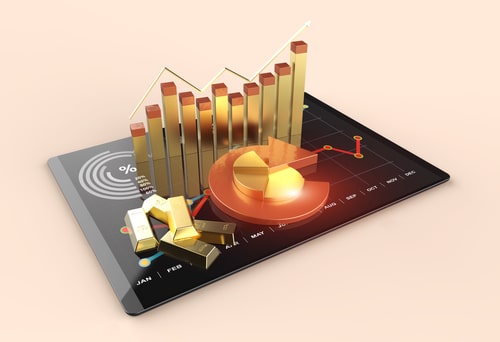 (Kitco News) Gold is trading in an environment of high inflation and geopolitical risks, which is somewhat offset by the Federal Reserve's aggressive tightening plan, according to a report by BMO Capital Markets.

What this means for gold is a new price floor of $1,800 an ounce. Here's how BMO explained its thinking:

"Multi-decade high inflation, which shows little sign of easing, the fallout from Russia's invasion of Ukraine, and mounting recessionary fears, are outweighing negative gold sentiment arising from an increasingly hawkish Fed, a rebound in equities and dollar strength," according to BMO's analysts. "Gold will likely continue to be buffeted by data releases and central bank commentary, which give an indication of macroeconomic health and policy direction, but as highlighted in this report we now expect gold prices to remain above $1,800/oz until mid-2023."

Gold's main drivers for 2022 are recessionary concerns, rising inflation, and geopolitical uncertainty. On the other hand, its main headwinds are aggressive monetary policy tightening and a higher U.S. dollar.

In this environment, BMO sees gold hitting a new record high this year after the precious metal already attempted to breach the psychologically important $2,000 an ounce level twice this year.

"These inflation projections already incorporate more than 250 bps of cumulative tightening by the end of next year," analysts said.

BMO is looking for the Fed to respond to rising price pressures with two oversized 50-basis-point hikes at the next two FOMC meetings in May and June. Afterward, the Fed is likely to continue with 25-point hikes per meeting. This is largely in line with market consensus calls.

In light of the Fed's hawkish policy stance, there have been growing recessionary concerns, with the central bank itself slashing economic growth forecasts for this year to 2.8% from previously 4%.

"The recent inversion of the 2s10s U.S. Treasury curve represents an ominous sign for the economy; however, it is the complete reset of the curve that is arguably more pertinent. Two-year yields have rocketed ~175 bps since the start of the year, the fastest rise since the early 1980s, and greatly exceeding the ~115 bp surge in 10-year yields," BMO's analysts said.

As the year goes on, the Fed and the European Central Bank are also very likely to keep revising their inflation projections upward and growth estimates downward, according to the report.

"Mounting recessionary signals should help to underpin gold's investment thesis as investors seek to mitigate portfolio risk, as well as hedging against inflation," it said. "We see gold prices remaining well supported by higher inflation prints over the next ~6 months, before central bank tightening to rein in this inflationary juggernaut starts to take some shine off gold."

BMO added that a "taper tantrum" is unlikely in response to the Fed's aggressive tightening, but gold's demand could cool down.

"Gold typically performs well when inflation runs hot, but the greater the inflationary pressures the more central banks need to tighten monetary policy, and naturally the higher interest rates rise (all else remaining equal) the greater the opportunity cost of holding a non-yielding asset such as gold," BMO's analysts wrote. "This is the conundrum that investors are trying to navigate, evidenced by gold firming following the March FOMC announcement, which saw the Fed adopt a surprisingly hawkish stance."

So far, demand for gold has been strong, with ETFs reporting 269 tons of net inflows in the first quarter of the year after registering 173 tons of outflows in 2021.

Gold equities are also gaining popularity after underperforming, the report pointed out. "A common question amongst gold investors through 2021 has been 'why have gold equities underperformed even when the commodity price has been consistently strong? This has indeed been the case, until the escalation of the Russia-Ukraine conflict more recently," the analysts said.