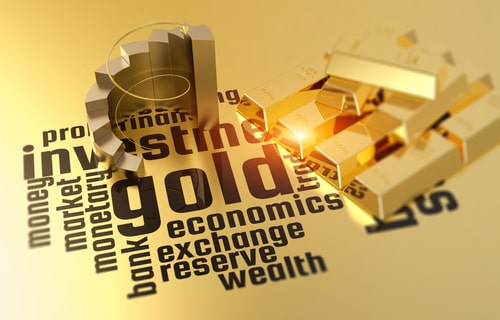 (Kitco News) The outlook for gold for the rest of the year appears "firm" as the precious metal holds the $1,900 an ounce level, boosted by jewelry demand, interest in gold-backed ETFs, and central bank gold buying, according to the S&P Global Market Intelligence.

"The global economy and credit markets are now confronting downside risks stemming from the Russia-Ukraine conflict, persistent inflationary pressures, forthcoming high interest rates, and the lingering pandemic," he said. "The global GDP growth is estimated to be around 3.6% this year."

This environment means "firm" prices for gold in the next few quarters. "Our price outlook for gold appears healthy for the short to medium term, remaining about the $1,900 an ounce mark on the back of the geopolitical and macroeconomic uncertainties," Goosen said.

However, one headwind that will pop up toward the end of the year is downside price pressure from rising interest rates, pushing gold a notch lower to $1,825 an ounce.

"As far as central banks are concerned, we expect them to raise interest rates to [bring] inflation [down]. And we expect prices to begin easing to around $1,825 per ounce by the end of this year before ending our five-year forecast horizon closer to around the $1,650 an ounce mark," he warned.

This year's increased gold demand is anchored in the idea that the precious metal is a hedge against inflation. In March, price pressures in the U.S. were at 8.5% annually in the U.S. — the fastest pace since 1981.

Most of the increased demand for gold will come from the jewelry sector, investors buying more gold-backed ETFs, and central banks worldwide stepping up their official gold purchases.

"Gold demand will be sustained at current levels and mainly supported by the jewelry sector, but also buoyed by central banks and ETF-related demand. We expect exploration growth to continue into this year," Goosen explained.

After reaching a high of around $2,052 this year, June Comex gold futures were last trading at $1,945. And ongoing geopolitical tensions and inflation are convincing investors to maintain their current positions in gold.

Mine production is estimated to increase by around 5.8% this year, with Australia surpassing China as the top producer. Meanwhile, Russia is likely to remain the third-largest producer as prices provide support for production, Goosen added.

Gold exploration budgets increased by 42% year on year to around $6.2 billion, while gold financing hit a multi-year high in March, and drilling activity surpassed pre-pandemic levels.

"This is a return back to the level last seen in 2013 when the last major downturn in the commodity sector began to take hold," Goosen noted.

In 2022, gold budgets are expected to increase further and remain resilient compared to other commodities, S&P Global's outlook stated.

In terms of the rising costs of producing gold in 2022, preliminary data suggest that total cash costs would rise by around 10% and surpass $900. "This reflects the higher crude costs, higher energy costs, [and] rising costs for raw material."