(Kitco News) - Kitco ranked the world's biggest gold mines by production in 2021. The ranking below was developed on the basis of 2021 (calendar year) production figures reported by companies and preliminary estimates for Muruntau. Gold output is in thousand ounces (koz).

1. Muruntau, Uzbekistan. 2,000 koz (estimated).
The Muruntau mining complex, located in Uzbekistan and consisting of open-pit mine and heap leach operations, is estimated to have produced slightly more than 2 million ounces of gold in 2021. Operated by state-owned Navoi company, the mine is more than 3.3km long, 2.5km wide nearly 600m deep. Considering the stunning resource base, estimated in excess of 150 million ounces, Muruntau will likely keep its title as the world's biggest gold mine in the nearest future.

2. Carlin, USA. 1,501 koz.
On July 1, 2019, Barrick's Goldstrike (including 60% share of South Arturo) and Newmont's Carlin were contributed to Nevada Gold Mines and are now referred to as Carlin. This gigantic integrated operation located west of the city of Elko on the geologic feature known as the Carlin Trend. Stretching 56km (35mi), the Carlin Trend was first prospected by Newmont geologists John Livermore and Alan Coope in 1965.

3. Grasberg, Indonesia. 1,370 koz.
Freeport-McMoRan's Grasberg copper-gold deposit in the Indonesian province of Papua was discovered in 1936 by a Dutch geologist who called it Ertsberg or "ore mountain". The mine, which provides work for 30,000 people, is located 4,100m above sea level near Puncak Jaya, the highest mountain in Papua. Production of gold peaked in 2001 at above 3,500 koz. The mine produced 1,370 koz of gold in 2021, up 62% over 2020 as the company successfully transitioned Grasberg to be the world's largest underground block-caving operation.

4. Olimpiada, Russia. 1,113 koz.
Located in one of Russia's most prolific gold mining provinces, gigantic Olimpiada mine is Polyus' largest operation. The mine began production in 1996 and currently accounts for over a half the Moscow-based company's total gold output. The ore mined at the site is processed at three plants with a combined capacity of 13 million tonnes of ore annually.

5. Cortez, USA. 828 koz.
The Cortez gold mine is a large gold mining and processing facility in Lander and Eureka County, Nevada, United States, located approximately 75 miles (120 km) southwest of Elko and comprises the Pipeline and South Pipeline deposits and the Cortez Hills deposit. Pipeline and South Pipeline are open pit mines, while Cortez Hills is an underground and open pit mining operation. On July 1, 2019, Cortez was contributed to Nevada Gold Mines, a joint venture between Barrick and Newmont.

7. Kibali, DRC. 812 koz.
The Kibali gold mine in Democratic Republic of Congo is situated adjacent to the town of Doko and 210km from Arua on the Ugandan border. Kibali is co-owned by AngloGold Ashanti (45%), Barrick Gold Corporation (45%) following its merger with Randgold Resources, and Société Minière de Kilo-Moto (SOKIMO) (10%), a state-owned gold mining company. 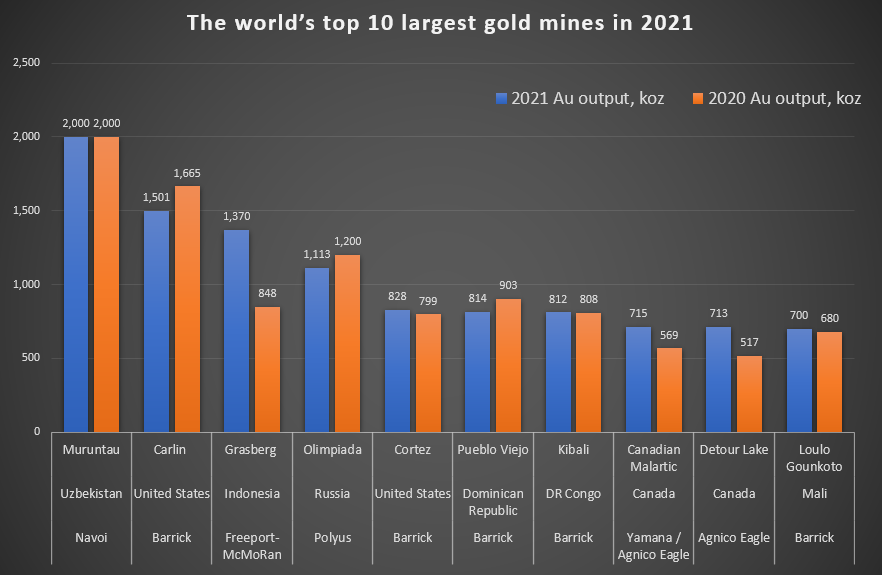