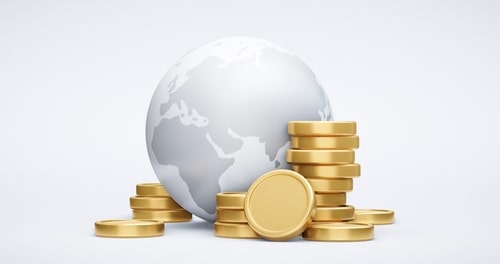 (Kitco News) Are we witnessing a reversal in globalization? What are some unintended consequences of sanctions against Russia and the weaponization of the world's reserve currency — the U.S. dollar?

With uncertainty still the dominant theme going into the second quarter of 2022, the main beneficiaries in this environment are safe-haven assets like gold and Bitcoin as the search for diversification becomes a priority for countries, institutions, and individual investors, according to analysts.

Existing trade deals and supply chains that took decades to build have been seriously disrupted — first by the COVID-19 pandemic and now by the war in Ukraine and sanctions against Russia.

Following Russia's invasion of Ukraine on February 24, the U.S dollar has been "weaponized" to put pressure on Russia via numerous financial sanctions, analysts told Kitco News. For example, around $300 billion of Russia's approximately $640 billion worth of foreign exchange reserves have been frozen, while Moscow has been banned from the SWIFT international payments system (aside from some energy payments).

"It's a very delicate matter. The Federal Reserve doesn't want to harm its reputation and trust in the U.S. dollar, which has not been backed by gold since 1974. At the same time, they are confiscating other central banks' money using the SWIFT system because their foreign policies are not aligned with the U.S.," Frank Holmes, CEO and CIO of U.S. Global Investors & Executive Chairman of HIVE Blockchain, told Kitco News.

And now, Russia is fighting back by demanding payments for gas in their own currency — the ruble. On Wednesday, Moscow halted gas supplies to Poland and Bulgaria. Russia's state gas giant Gazprom stated that it would only resume supplies once both countries pay for the gas in Russian rubles.

Poland and Bulgaria said they refused to pay in rubles, with the EU arguing that it violates sanctions imposed on Moscow and is a breach of contract. Following the halt, European gas prices surged.

Back in March, Russia also signaled that it could consider accepting Bitcoin for its oil and gas exports after the chair of Russia's Duma Committee on energy said that the country would be more flexible when it comes to payment options with "friendly" countries. Meanwhile, "unfriendly" countries could be required to pay for gas in Russian rubles or gold, Zavalny added.

And Russia is not the only one starting to think that way. Saudi Arabia has been in active talks with China to accept yuan for some of its oil sales to Beijing, a move that potentially puts a dent into the U.S. dollar's dominance in the petroleum space.

These are all signs that globalization might be reversing or even dying, which has already been acknowledged by many central bank officials around the world.

Federal Reserve Chair Jerome Powell said last week that after all of this is over, the world will be a different one.

"It is clear that [globalization] certainly slowed down and may go into reverse. You've seen questions about globalization and this series of events around Ukraine certainly has the possibility of leading to a more fragmented political situation and economic situation," Powell said during a panel discussion at the IMF and the World Bank Spring Meetings. "It would certainly be a different world. It might be a world of perhaps higher inflation, perhaps lower productivity but more resilient, more robust supply chains. The supply chains that we had were very efficient but quite fragile as it turned out."

There is a definite reassessment of globalization and a tilt toward populism on a major scale, noted Holmes. "This movement got a big jolt with Brexit, as the U.K. was tired of abiding by policies instituted by unelected bureaucrats in Brussels, and it's only expanded since then," he said. "Globalization has given us lower prices for finished goods, but it's also created far more vulnerabilities in terms of having access to strategic metals and energy resources."

On the one hand, this geopolitical situation has boosted the dollar as a safe-haven currency, with the U.S. dollar index rising to two-year highs on the back of all this uncertainty.

"The U.S. dollar is strengthening against all other FIAT currencies and will continue to do so as the U.S. continues to be the nicest house in a rough neighborhood. The success of the sanctions and the trouble Russia is having in Ukraine is making everyone think twice before taking any action that may upset the U.S.," said Alex Mashinsky, CEO of Celsius Network.

Also, the hawkish stance of the Federal Reserve is boosting the case for the U.S. dollar against the euro and other currencies that don't have such an aggressive tightening plan behind them, said Aryan Chopra, wealth manager at Castell Wealth Management.

"My position on USD is neutral and while I don't see the U.S. dollar losing its status as the world's reserve currency in the long-term; I am, however, not bullish on USD in relation to emerging markets and commodity-based currencies in the near term," Chopra told Kitco News. "In a high inflation environment … I am more concerned about countries with high debt to GDP and have limited ability to control their own currency they hold the debt in. The United States is well-equipped in this regard. Hence, I don't see USD losing its status as the world's reserve currency."

Russia's invasion of Ukraine has untied the West and effectively extended the life of the U.S. dollar as the global reserve currency for another 30-50 years, Mashinsky told Kitco News.

"The U.S. successfully weaponized the USD and proved to the world that it still holds the global power to decide who can transact and who can not. Even Switzerland agreed to join the SWIFT sanctions this time around," he said.

Yet, on the other hand, the widely used financial sanctions against Russia via limiting access to the U.S. dollar and international payment systems could encourage more countries to diversify their reserves away from the U.S. dollar, which Russia has already been doing for years.

This is all bullish for both gold and Bitcoin, said Holmes. "Think of Maslow's Hierarchy of Needs. People have an intrinsic need to feel safe—financially, in this case—and if they can't get it with a savings account or government bond, they'll surely get it with gold or its digital cousin," he pointed out.

Sanctions against Russia have clearly demonstrated to others that holding dollar reserves at other banks does not mean they can be accessed or spent at all times, noted Mashinksy.

"Every central bank and commercial bank has to re-evaluate who they have reserves with and what denomination they use. This gives Bitcoin, Gold, and other digital assets much higher value than before and forces faster adoption of such assets worldwide," he said.

One of the consequences of the dollar being weaponized is increased demand for gold as a hedge, agreed Chopra.

"Sovereign nations will look for more diversification of reserves and payment systems with increased exposure to gold, bitcoin, and foreign exchange reserves based on their trading and supply chain partners," he said. "This is a bull case for the precious metal over the long-term that has achieved a return of over 500% since 2000 (in two decades)."

Chopra said it was too early for countries to start buying Bitcoin as part of their reserves since the world's largest cryptocurrency is still in the infancy stage and remains very volatile and highly leveraged.

"As an asset class, bitcoin behaves like a growth or technology stock and tends to do very well in a risk-on environment. In stagflation or a decelerating economy environment, it is yet to be seen if bitcoin will hold and act as a commodity or a store of value," he explained.

However, Bitcoin's story as a reserve holding can change when big pension funds get involved, Chopra added. "This will require government acceptance, regulations, and compliance for the asset."

According to the IMF, the dollar foreign exchange reserves have already been on the decline since 2000, dropping from 71% to 60%. In the meantime, gold as a percentage of total reserves has been rising for emerging economies and declining for advanced economies, the World Gold Council's (WGC) data showed.