HOUSTON, April 29 (Reuters) - Chevron Corp's (CVX.N) first-quarter profit leapt from the same period a year ago to its highest in 10 years, benefiting from the surge in oil and gas prices in the aftermath of Russia's invasion of Ukraine.

The second-largest U.S. oil producer on Friday posted adjusted earnings of $6.5 billion or $3.36 per share, from $1.7 billion, or 90 cents per share, in the same quarter last year.

Nevertheless, the result fell short of the $3.47 SmartEstimate figure from top-performing analysts on Wall Street according to Refinitiv, but was above the Refinitiv average estimate of $3.27 per share.

Jefferies called the performance "the most underwhelming set of numbers" so far in the first quarter.

The world's largest energy companies have been under pressure to boost output as oil and gas prices rose sharply as Moscow decided to invade Ukraine and after the United States and allies imposed heavy sanctions on Moscow.

The global benchmark Brent averaged $114 per barrel in the first quarter. Energy supplies have tightened around the globe as demand has rebounded to near pre-pandemic levels.

Chevron's revenue rose 70% to $54.4 billion in the first quarter, above the Refinitiv consensus of $47.9 billion. 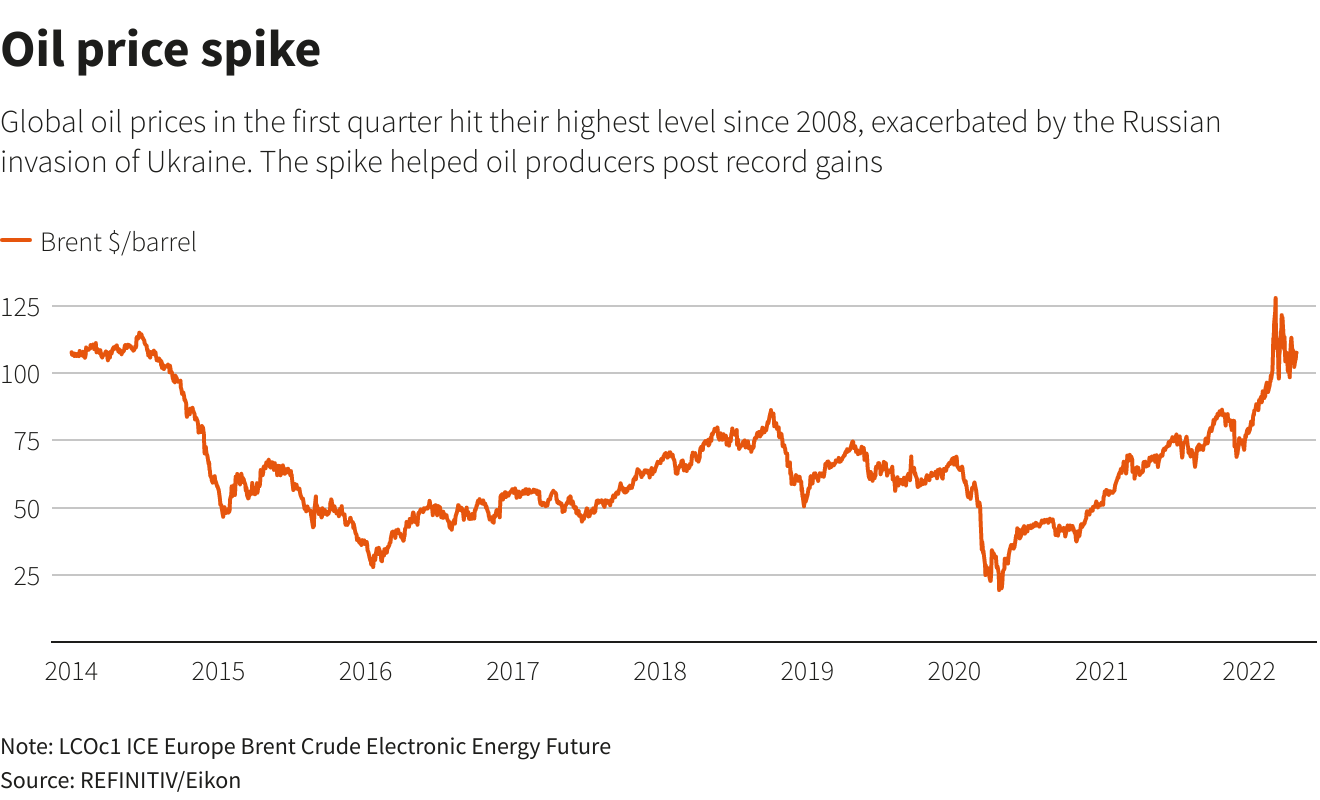 Global oil prices in the first quarter have hit their highest level since 2008, exacerbated by the Russian invasion of Ukraine. The increase helped oil producers post record gains

"First is the dividend. The second is investing in the business. Third is maintaining a balanced strong balance sheet. And then the fourth is returning excess cash to shareholders," he said.

Chevron earlier this year increased its dividend payments by 6% to $1.42 per share and increased its buyback program to $10 billion annually; it bought back $1.3 billion in shares in the most recent quarter.

The company could raise buybacks further but Chevron is aiming at a level it can maintain when the oil industry goes through a downturn, Breber said.

Chevron plans to raise investments and acquisitions this year by more than 50% from 2021, which may include deals in lower-carbon ventures like natural gas and renewable fuels.

RBC said earlier this month that Chevron could be interested in buying a liquefied natural gas (LNG) facility on the U.S. Gulf Coast as it expands its natural gas business. The company declined to comment on the speculation.

Chevron is still determining the second-quarter impact of storm damaage to the Caspian Pipeline Consortium (CPC), the line to move crude from Kazakhstan to Russia's Black Sea coast, which is back in operation after several weeks. Chevron has a 15% stake in that line.

Disruptions at the CPC, which transports roughly 1% of the world's crude from Kazakhstan, contributed to a 8% reduction in Chevron's international oil and gas output in the quarter, according to the corporate presentation.

The consortium said Sunday that it has fully restored the loading capacity of its Black Sea oil terminal after completing repairs.

Reporting by Sabrina Valle; Editing by Richard Pullin
Disclaimer: The views expressed in this article are those of the author and may not reflect those of Kitco Metals Inc. The author has made every effort to ensure accuracy of information provided; however, neither Kitco Metals Inc. nor the author can guarantee such accuracy. This article is strictly for informational purposes only. It is not a solicitation to make any exchange in commodities, securities or other financial instruments. Kitco Metals Inc. and the author of this article do not accept culpability for losses and/ or damages arising from the use of this publication.