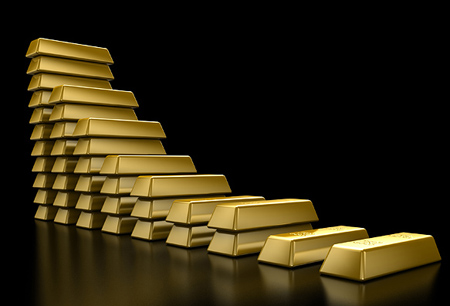 Some analysts have noted that gold's inability to break above $1,920 an ounce Friday has significantly shifted sentiment to the bearish side at the start of the trading week. However, analysts also note that silver is leading the way on the downside after support at $23 an ounce broke overnight. July silver futures last traded at $22.57.0 an ounce, down nearly 2.21% on the day. Earlier in the session silver was down roughly 4%.

"Everything is just happening all at once and working against gold and silver," said Phillip Streible, chief market strategist at Blue Line Futures.

Streible noted that the first domino to fall in the commodity market was copper following disappointing manufacturing data from China. Weakness in copper hit silver's industrial component when then dragged down gold.

At the same time, gold and silver continue to face significant strength in the U.S. dollar as 10-year bond yields push back to 3% in anticipation of the Federal Reserve's monetary policy decision on Wednesday.

The U.S. dollar index continues to trade at its highest level in nearly 20 years. U.S. bond yields are at their highest level since 2018 as markets expect the Federal Reserve to aggressively raise interest rates. A 50-basis point move is all but guaranteed for Wednesday. The U.S. central bank will also start to reduce its balance sheet by $95 a month.

"The Fed is so far behind the curve that they have painted themselves into a corner, and they are rushing to raise interest rates," said Colin Cieszynski, chief market strategist at SIA Wealth Management. "This is flushing a lot of longs out of the marketplace. This is something we have seen before any major rate hike."

Ole Hansen, head of commodity strategy at Saxo Bank, said that if gold is going to find any support, it probably won't come until after Wednesday's monetary policy decision. He added that gold's inability to push above $1,920 an ounce on Friday, created a "dangerous market environment."

Although gold is struggling at the start of the week, there is still some optimism among analysts. Cieszynski noted that there is still a lot of uncertainty surrounding the Fed's plans to aggressively raise interest rates. He noted that the U.S. central bank risks pushing the U.S. economy into a recession if it tightens too quickly.

Cieszynski added that although gold has room to move lower as it's not technically oversold, there is some resilient strength in the marketplace.

"The U.S. dollar is near a 20-year high, where was the price of gold 20 years ago," he said. "Gold ability to hold at current levels is impressive when you see all the headwinds it faces."

Streible added that he sees the current selloff as a capitulation move ahead of Wednesday's monetary policy meeting.

Investors looking at adjusting their portfolios in the current environment, Streible said that he would look at lightening up on volatile commodities like copper and silver but defend their position in gold.

"There is still a lot of uncertainty in the marketplace and gold still looks good as a low volatile asset," he said. "I don't think the Federal Reserve can get more hawkish, which could be good for gold."