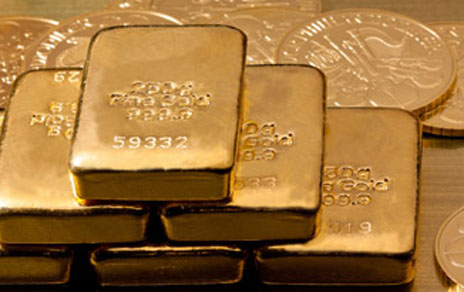 (Kitco News) - After a robust first-quarter start, investment demand for gold-backed exchange-traded funds started to cool last month as investors began to position themselves for the Federal Reserve's aggressive monetary policy tightening, according to the latest data provided by the World Gold Council.

In a report published Friday, the WGC said that 43 tonnes of gold flowed into the paper ETF market in April. The inflows lifted total global holdings to 3,869 tonnes, valued at $238 billion. Total holdings are just 1% below the all-time high of 3,922t in November 2020.

"While this is 77% lower than the previous month, which was the strongest since February 2016, it is the fourth consecutive month of inflows, maintaining the momentum of flight-to-quality flows we have witnessed this year," the analysts said. "Gold faced pressure during the month as yields rose sharply – U.S. 10-year real yields briefly turned positive for the first time since 2020 – in response to progressively more hawkish central bank rhetoric, while the U.S. dollar strengthening significantly."

"Regional inflows were again concentrated in the UK, Germany and France, all of which hit a record level of holdings during the month. Funds listed in Switzerland bucked the trend with minor net outflows," the analysts said. "European investors continue to seek exposure to gold amid the backdrop of record-high inflation exacerbated by concerns over energy supplies, slower economic growth and geopolitical unrest."

"While interest rate expectations rose during the month, investor concerns about slower economic growth and high inflation were unabated, driving demand for hedges such as gold and commodities," the analysts said.

While investment demand for gold has been healthy since the start of the year, some analysts note that the Federal Reserve's monetary policy is starting to weigh on sentiment. According to reports, gold ETFs saw their first outflows last week, ending 14 consecutive weekly gains.

Adam Perlaky, senior analyst at the WGC, said that gold prices still have a path higher, even as interest rates move higher.

"The inflows throughout April, despite rising yields and higher interest rate expectations, illustrate that investors are still concerned about high inflation and slower economic growth. Given the risk of a stagflationary environment, demand for liquid hedges such as gold continued to rise, especially among European and North American funds," he said.

Perlaky added that gold investors should pay attention to the U.S. dollar, which is trading near its highest level in almost 20 years. He said the greenback could have the biggest impact on the precious metal.

"Historically, a strong dollar has maintained a negative correlation with the price of gold, suggesting the asset may face headwinds in the future. However, it's important to consider that gold's reaction could be influenced by the drivers behind the strengthening dollar, rather than its direction alone," he said. "If the dollar remains strong due to hawkish central banks and rising yields, gold would likely be negatively impacted, but if the rise is due to a risk-off sentiment and geopolitical tensions continue, gold could move up."