Citigroup sees space mining as a reality by 2040, with space economy growing to $1 trillion

(Kitco News) - Once the realm of science fiction and wild speculation, the idea of mining on the moon and asteroids in space continues to gain more attraction, with one major bank seeing the possibility of space mining before the end of the first half of this century.

In a report published Wednesday, analysts at Citigroup looked at the growing potential of the space economy. The analysts said this new frontier could generate $1 trillion by 2040, up from $370 billion in 2020.

"We have finally come to a stage where the dreams around space from childhood are turning into reality. Space tourism could really become more accessible to the average person. Mining on the moon or on an asteroid is seriously being considered. And powering the Earth with solar power collected from satellites is on the horizon," the analysts said in the report.

The report highlighted two significant factors contributing to the growing potential of the space economy. A major change has been the emergence of private-sector companies entering the space, which has been dominated by government agencies.

Another significant factor driving the new space race is a substantial decline in costs. 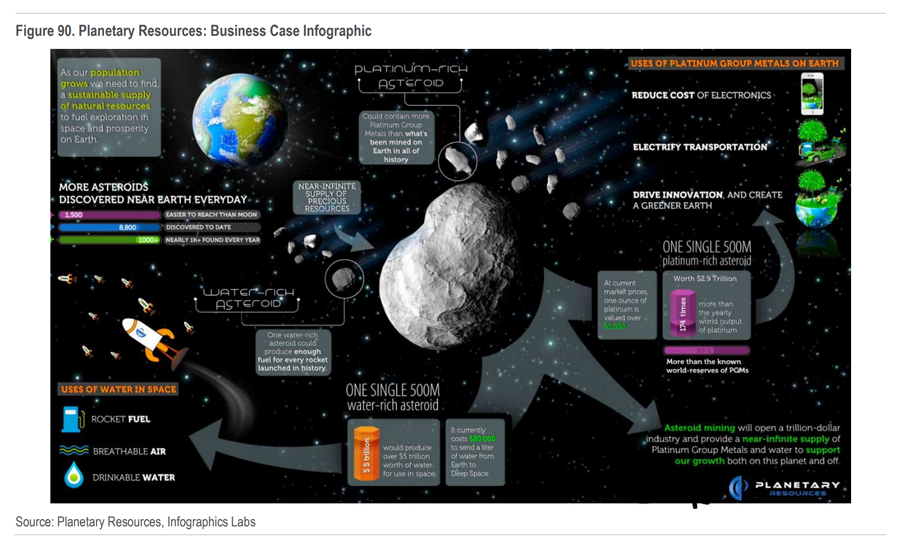 Citigroup expects that industrial applications like solar power generation and space mining could represent the largest portion of economic activity, generating $100 billion a year by 2040.

Looking at the resources in space, the report said that NASA has estimated that the asteroid belt contains minerals worth more an $100 billion for each of the six billion people on Earth.

"NASA estimates in theory 16 Psyche is worth $10,000 quadrillion. The asteroid contains enough iron and nickel to cover the world's needs for millions of years," said Citigroup.

However, the idea of astronauts bringing down gold, silver, iron and other metals from space could be a little ways off. Citigroup said it is more feasible to start mining on the moon, with water being the first extracted resource.

"The key benefit with mining the Moon is that it is relatively close, taking only several days by rocket, and communication lags by only a couple of seconds, which will allow remote operation of robots from Earth," the analysts said. "Our base case is that by 2040, mining water will be the initial focus given its value for additional space missions as a rocket propellant and importance for any colonization and industrial efforts in space."

After water, Citi analysts expect that helium 3 will be the next major resource to be mined on the moon.

"Helium3 has been proven to be quite desirable for nuclear power. It could also be used as the primary fuel source for building infrastructure on the moon or in space. However, the temperature required to achieve helium-3 fusion is extremely high," the analysts said.

The third top resource Citigroup expects will be mined in is space would be rare earth minerals.

"The U.S., in particular, is looking to reduce its reliance on China (which controls over 90% of rare-earth metals), and is one of the factors driving NASA to launch the Artemis lunar exploration program by 2024," the report said. "The tricky part of the feasibility of mining rare-earth metals is the high cost of transporting it back to Earth given its heavyweight and with demand driven by the Earth."