LONDON, May 12 (Reuters) - Shares sank to a 1-1/2 year low on Thursday and the dollar hit its highest in two decades, as fears mounted that fast-rising inflation will drive interest rates higher and bring the global economy to a standstill.

Those nerves and a German warning that Russia was now using energy supplies as a "weapon" yanked Europe's top markets down 2% and left MSCI's index of world shares (.MIWD00000PUS) nearly 20% lower for the year.

The global growth-sensitive Australian and New Zealand dollars fell about 0.8% to almost two-year lows. The Chinese yuan slid to a 19-month trough while Europe's worries shoved the euro to its lowest since early 2017. .

"We have had big moves," UBS's UK Chief Investment Officer Caroline Simmons, said referring as well to bond markets and economic expectations. "And when the market falls it does tend to fall quite fast."

Tensions were stoked again as Finland confirmed it would apply to join NATO "without delay" in the wake of Russia's invasion of Ukraine, a war that has already had a major economic effect by driving up global energy and food prices. read more

U.S. markets whipsawed after the news, closing sharply lower as Fed rate hike worries took hold again. Futures prices were pointing to another round of 0.2%-0.7% falls for the S&P 500, Nasdaq and Dow Jones Industrial later.

The near 20% drop in MSCI's world stocks index since January is its worst start to a year in recent memory.

"We're now very much embedded with at least two further (U.S.) hikes of 50 basis points on the agenda," said Damian Rooney, director of institutional sales at Argonaut in Perth.

"I think we probably were delusional six months ago with the rise of U.S. equities on hopes and prayers and the madness of the meme stocks," he added. 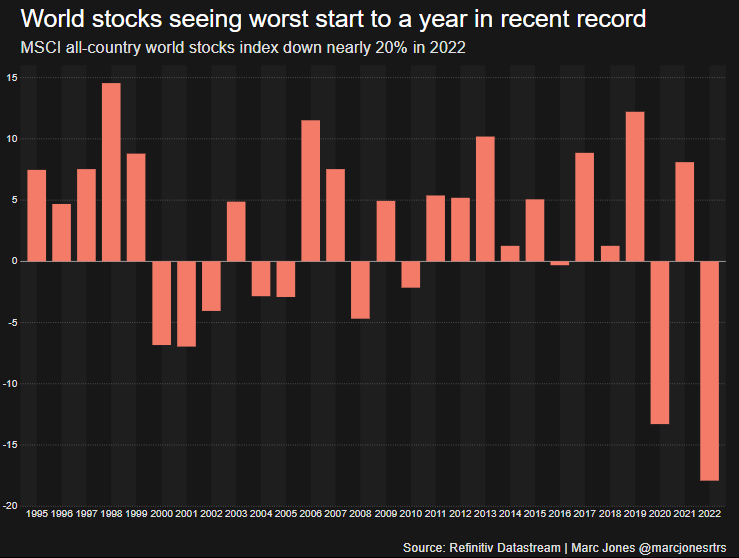 The guaranteed returns of bond markets meant U.S. Treasuries were bid, especially at the long end, flattening the yield curve as investors braced for near-term hikes to hurt long-run growth - an outcome that would most likely slow or even reverse rate hikes.

The benchmark 10-year Treasury yield , which moves inversely to prices, dropped to 2.82% on Thursday from over 3% at the start of the week, while Germany's 10-year yield, the benchmark for Europe, fell as much as 15 bps to 0.85%, its lowest in nearly two weeks.

"I think a lot of it is catch up from what happened yesterday, and also there's still a lot of negative sentiment in the U.S. Treasury curve," said Lyn Graham-Taylor, senior rates strategist at Rabobank.

The prospect of the fastest hike in Fed rates in decades is driving up the U.S. dollar and taking the heaviest toll on riskier assets that shot up through two years of pandemic-era stimulus and low-rate lending.

Cryptocurrency markets are also melting down, with the collapse of the so-called stablecoin TerraUSD highlighting the turmoil as well as the selling in bitcoin and next-biggest-crypto, ether , which slumped 15%. read more

Tether, currently the world's largest stablecoin by market cap with a value directly tied to the dollar broke below its so-called U.S. dollar 'peg' on Thursday. The global sell-off has now wiped more than $1 trillion off crypto markets. Around 35% of that loss has come this week.

"The collapse of the peg in TerraUSD has had some nasty and predictable spillovers. We have seen broad liquidation in BTC, ETH and most ALT coins," said Richard Usher, head of OTC trading at BCB Group, referring to other cryptocurrencies.

A weakening growth picture outside the United States is battering investor confidence, too, as war in Ukraine threatens an energy crisis in Europe and lengthening COVID-19 lockdowns in China throw another spanner into supply chain chaos.

Nomura estimated this week that 41 Chinese cities are in full or partial lockdowns, making up 30% of the country's GDP.

Sterling was at a two-year low of just under $1.22 as well as economic data there caused worries and concerns grew that Britain's Brexit deal with the EU was in danger of unravelling again due to the same old problem of Northern Ireland's border. read more

In commodity trade, oil wound back a bit of Wednesday's surge on growth worries.

Brent crude futures fell 2.3% to $104.93 a barrel, while highly growth-sensitive metals copper and tin slumped over 3.5% and 9% respectively. That marked copper's lowest level since October.

Additional reporting by Tom Westbrook in Singapore; Editing by Chizu Nomiyama, Kirsten Donovan
Disclaimer: The views expressed in this article are those of the author and may not reflect those of Kitco Metals Inc. The author has made every effort to ensure accuracy of information provided; however, neither Kitco Metals Inc. nor the author can guarantee such accuracy. This article is strictly for informational purposes only. It is not a solicitation to make any exchange in commodities, securities or other financial instruments. Kitco Metals Inc. and the author of this article do not accept culpability for losses and/ or damages arising from the use of this publication.