SINGAPORE/HONG KONG/LONDON, May 13 (Reuters) - Cryptocurrencies nursed large losses on Friday, with bitcoin just above $30,000 and set for a record losing streak after the collapse of TerraUSD, a so-called stablecoin, rippled through cryptocurrency markets.

Crypto assets have also been swept up in broad selling of risky investments on worries about high inflation and rising interest rates. Sentiment is particularly fragile, as tokens supposed to be pegged to the dollar have faltered.

Bitcoin , the largest cryptocurrency by total market value, managed to bounce in the Asia session and traded at $30,335 at 0843 GMT. It has staged something of a recovery from a 16-month low of around $25,400 reached on Thursday.

But it remains far below week-ago levels of around $40,000 and, unless there is a rebound in weekend trade, is headed for a record seventh consecutive weekly loss.

"I don't think the worst is over," said Scottie Siu, investment director of Axion Global Asset Management, a Hong Kong based firm that runs a crypto index fund.

"I think there is more downside in the coming days. I think what we need to see is the open interest collapse a lot more, so the speculators are really out of it, and that's when I think the market will stabilize."

Crypto-related stocks have taken a pounding, with shares in broker Coinbase (COIN.O) steadying overnight but still down by half in little more than a week.

In Asia, Hong Kong-listed Huobi Technology (1611.HK) and BC Technology Group (0863.HK), which operate trading platforms and other crypto services, eyed weekly drops of more than 20%.

But broader financial markets have so far seen little knock-on effect from the cryptocurrency crash.

"This idea that what goes on in crypto stays in crypto – that’s in many ways where we still are at the moment." 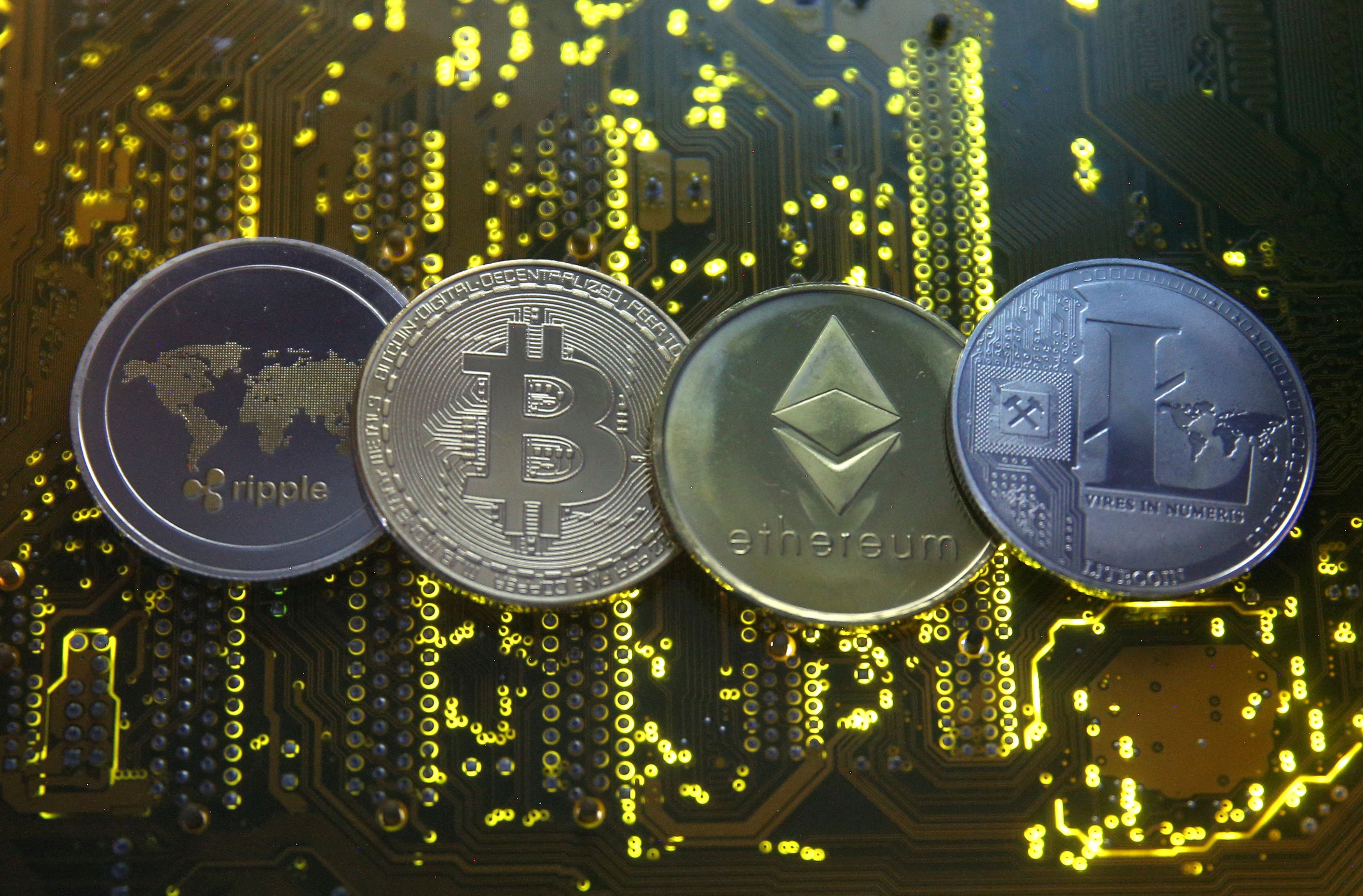 Representations of the Ripple, Bitcoin, Etherum and Litecoin virtual currencies are seen on a PC motherboard in this illustration picture, February 14, 2018. REUTERS/Dado Ruvic/Illustration

Selling has roughly halved the global market value of cryptocurrencies since November, but the drawdown has turned to panic in recent sessions with the squeeze on stablecoins.

Stablecoins are tokens pegged to the value of traditional assets, often the U.S. dollar, and are the main medium for moving money between cryptocurrencies or to convert balances to fiat cash. read more

Cryptocurrency markets were rocked this week by the collapse of TerraUSD (USDT), which broke its 1:1 peg to the dollar.

Tether, the biggest stablecoin and one whose developers say is backed by dollar assets, has also come under pressure and fell to 95 cents on Thursday, according to CoinMarketCap data, but was back at $1 on Friday. read more

"Over half of all bitcoin and ether traded on exchanges are versus a stablecoin, with USDT or Tether taking the largest share," analysts at Morgan Stanley said in a research note.

"For these types of stablecoins, the market needs to trust that the issuer holds sufficient liquid assets they would be able to sell in times of market stress."

Tether's operating company says it has the necessary assets in Treasuries, cash, corporate bonds and other money-market products.

But Tether is likely to face further tests if traders keep selling, and analysts are concerned that stress could spill over into money markets if pressure forces more and more liquidation.

Ratings agency Fitch said in a note on Thursday that there could be "significant negative repercussions" for cryptocurrencies and digital finance if investors lose confidence in stablecoins.

"Many regulated financial entities have increased their exposure to cryptocurrencies, defi and other forms of digital finance in recent months, and some Fitch-rated issuers could be affected if crypto market volatility becomes severe," it said.

However, Fitch said that weak links between crypto markets and regulated financial markets will limit the potential of crypto market volatility to cause wider financial instability.

Reporting by Tom Westbrook and Alun John; Editing by Bradley Perrett and Emelia Sithole-Matarise
Disclaimer: The views expressed in this article are those of the author and may not reflect those of Kitco Metals Inc. The author has made every effort to ensure accuracy of information provided; however, neither Kitco Metals Inc. nor the author can guarantee such accuracy. This article is strictly for informational purposes only. It is not a solicitation to make any exchange in commodities, securities or other financial instruments. Kitco Metals Inc. and the author of this article do not accept culpability for losses and/ or damages arising from the use of this publication.