Four reasons why the bond market rout may be over

May 13 (Reuters) - Battered U.S. and German government bond markets have just put in their best weekly performance since early March, suggesting a painful surge in yields due to high inflation may finally be abating as the focus turns to growth fears.

Gilts in Britain, where the Bank of England warned of a potential recession, saw their best performance since 2011.

But here are four key shifts that suggest a turning point for the world's biggest debt markets.

Key benchmark 10-year bond yields have failed to hold above critical levels: 3% on U.S. Treasuries, 2% on British gilts and 1% on German Bunds. , ,

"The fact that we didn't hold onto that was taken as a signal that ... there wasn't that much conviction behind high yields," said ING senior rates strategist Antoine Bouvet.

Investors are covering underweight positions in U.S. bonds sensitive to rates swings, usually the longest dated, at levels last seen in early 2021, BofA said in an investor survey on Friday. Respondents considered short positioning on rates -- bets that yields will rise further -- as the most overcrowded trade.

Market inflation expectations have fallen particularly sharply since the U.S. Federal Reserve jacked up rates on May 4.

Inflation breakevens, which measure the difference between nominal and inflation-adjusted yields, fell further after U.S data this week suggested inflation may be peaking. read more

The euro zone's the five-year, five-year breakeven forward inflation swap, tracked by the European Central Bank, fell to roughly two-months lows at around 2.16%.

Those falls have been driven by soaring inflation-adjusted , "real" yields. U.S. 10-year real yields have jumped 25 bps over the last two weeks, Germany equivalents are up 43 bps.

If markets are right, "central banks' inflation problems are less dire than the market considered them to be weeks or months ago," said Arne Petimezas, senior analyst at AFS Group.

With inflation expectations falling, markets have reduced bets on the "terminal rate" -- where this hiking cycle ends. That's a sign investors believe less hikes may be necessary to contain inflation.

In the United States, money markets imply rates will rise to around 3% in mid-2023, compared to around 3.5% in early May. In the euro zone, where economists have warned rate hike pricing has been excessive, the ECB's policy rate is seen at roughly 1.2% in 2024, down from around 1.5% last Friday.

"The big move in bonds has been accompanied by a rerating of the rate outlook for the Fed, (Bank of England) and ECB," said Divyang Shah, strategist at Refinitiv's IFR Markets.

That is "very different to the prior corrections for bonds that did not last as expectations were still rising." 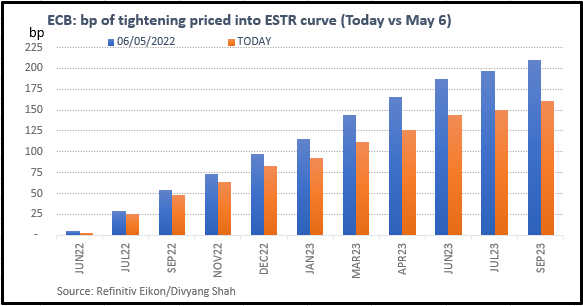 Finally, this week's stellar bond performance came with a 4% slide in world stocks, putting top-rated government bonds back in the safe-haven seat.

That inverse correlation had recently been absent as equity and bond prices dropped together in the face of surging inflation.

In the United States, it's the first week since early March where 10-year bonds and the S&P 500 are set to end in opposite directions.

"The bit that's been missing is that risk-off means bonds rally," said Nick Hays, head of sterling rates and credit at AXA Investment Managers. "That doesn't always work but we can't go on for too long where bonds don't behave as a safe-haven."

(This story corrects paragraph 21 to say rerating not reiteration.)

Reporting by Yoruk Bahceli; additional reporting and editing by Dhara Ranasinghe and David Evans
Disclaimer: The views expressed in this article are those of the author and may not reflect those of Kitco Metals Inc. The author has made every effort to ensure accuracy of information provided; however, neither Kitco Metals Inc. nor the author can guarantee such accuracy. This article is strictly for informational purposes only. It is not a solicitation to make any exchange in commodities, securities or other financial instruments. Kitco Metals Inc. and the author of this article do not accept culpability for losses and/ or damages arising from the use of this publication.