A deluge of data from across major economies comes at a pivotal moment in the debate over whether central banks are jacking up interest rates into a potentially sharp global growth slowdown.

And with jittery investors dumping risk assets en masse, what comes next after a crypto-currency rout is also in focus.

Here's your week ahead in markets from Ira Iosebashvili in New York, Tom Westbrook in Singapore, Elizabeth Howcroft, Sujata Rao and Karin Strohecker in London.

The Federal Reserve is all but certain to hike interest rates by 50 basis points at upcoming meetings. Upcoming data should show whether hefty tightening will bring a hard or soft landing for the economy.

Forecasts for Tuesday's U.S. retail sales data predict a 0.7% rise in April after a 0.5% monthly increase in March. Signs of how much inflation, which shows only the slightest hints of moderating, is pinching consumers may also be evident in Tuesday's earnings reports from Walmart, Home Depot and Macy’s. read more

The Fed's determination to contain inflation has fuelled hard landing worries. The S&P 500 is set for its worst year since 2008 -- any signs the economy is weathering higher rates would be welcome relief. read more 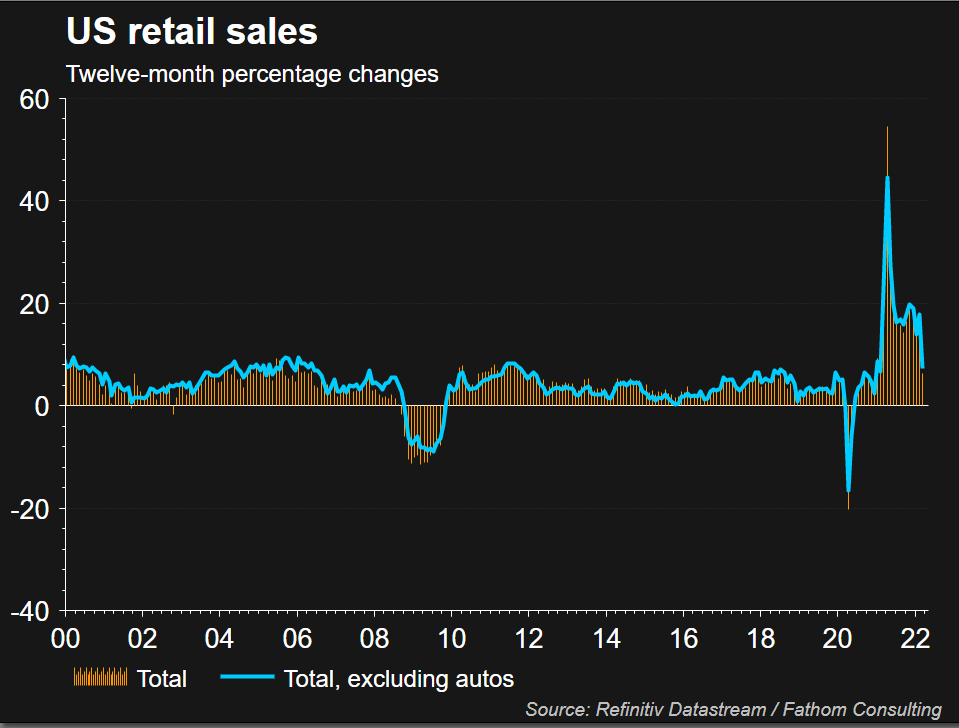 Cryptocurrency aficionados and observers alike will be watching for the fallout of a spectacular price collapse.

Bitcoin was on track on Friday for a double-digit weekly drop, and headed for a record losing streak. Other cryptocurrencies have also slid with investors shunning risk assets as central banks get aggressive on inflation.

Whether so-called stablecoins can maintain their dollar pegs as investor confidence plummets is key. The algorithmic stablecoin TerraUSD broke its peg and has plunged to as low as 30 cents, as its complex balancing mechanism involving another free-floating token stopped working. read more

Others such as Tether, USD Coin and Binance USD are confident they will be spared TerraUSD's fate because their cryptocurrencies are backed by reserves of dollar-based assets. Those reserves may come under increasing scrutiny as investors assess whether those coins can handle a wave of redemptions.

A data pulse across Asia could re-calibrate the outlook for regional assets.

And in Australia, wages 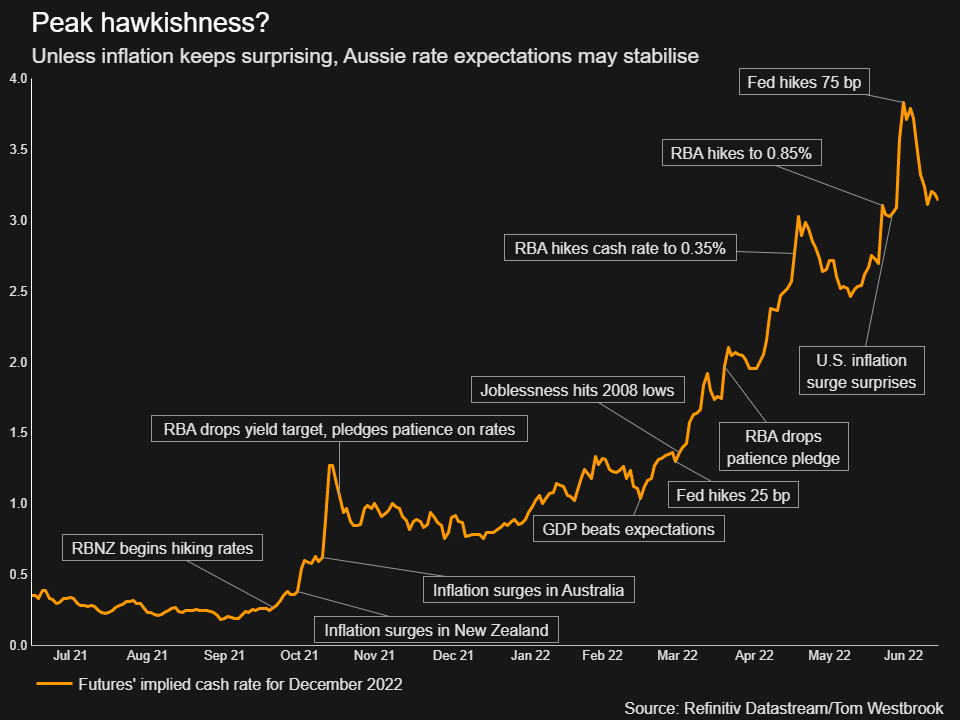 The consumer is in trouble. Soaring food and fuel prices are eroding disposable incomes and lockdown-era savings that could have been spent on travel and shopping, are dwindling fast.

Economists predict COVID curbs will have driven a 6% slump in China's April retail sales, almost double March falls. U.S. April retail sales are tipped to rise, but as in March, gasoline and food may account for most of the increase. read more

British consumer confidence slumped in March to near the lowest in nearly half a century, research firm GfK said. A cost-of-living squeeze likely deepened shoppers' gloom in April. read more

No surprise global consumer discretionary shares have tumbled almost a third this year, exceeding a broader equity index fall (.FTAWORLDS40U), (.FTAWORLDSR). Investors have taken note; several say they are no longer banking on the consumer. 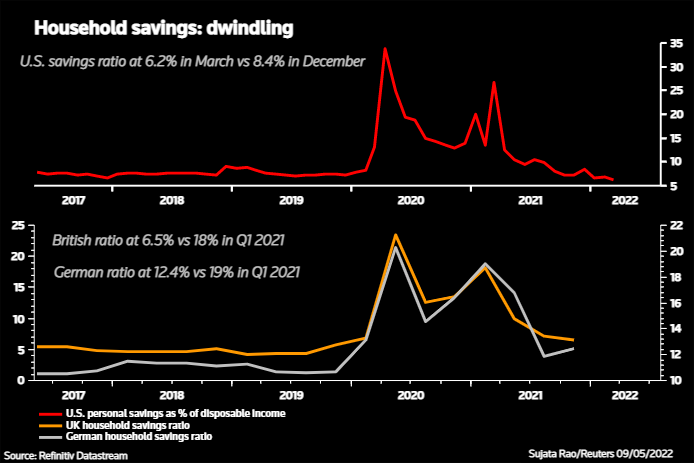 Pressures on Europe's gas markets show no sign of abating.

Moscow's sanctions against Gazprom Germania, in which its gas producer Gazprom ceded ownership, and EuRoPol GAZ SA, owner of the Polish part of the Yamal-Europe gas pipeline, have sent prices higher. A Kremlin decree from May 3 bans Russian entities to make deals with those on the sanctions list. read more

This has hit flows to Europe already diminished after Ukraine declared force majeure and said it will not reopen a key gas transit route from Russia to Europe until Kyiv obtains full control over its pipeline system. read more

And there's still confusion among EU gas companies over a payment scheme decreed by Moscow in March that the European Commission has said would breach EU sanctions as deadlines approach. 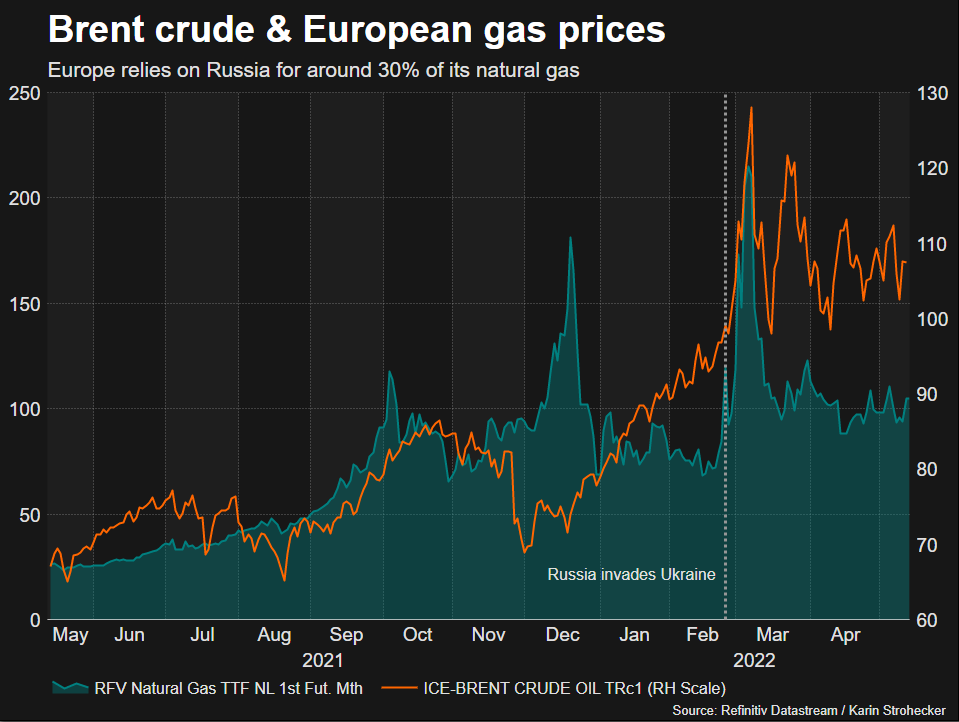 Brent crude and gas prices
Compiled by Dhara Ranasinghe; Editing by Emelia Sithole-Matarise
Disclaimer: The views expressed in this article are those of the author and may not reflect those of Kitco Metals Inc. The author has made every effort to ensure accuracy of information provided; however, neither Kitco Metals Inc. nor the author can guarantee such accuracy. This article is strictly for informational purposes only. It is not a solicitation to make any exchange in commodities, securities or other financial instruments. Kitco Metals Inc. and the author of this article do not accept culpability for losses and/ or damages arising from the use of this publication.