NEW YORK, May 13 (Reuters) - Global shares rose on Friday and investor sentiment stabilized after a volatile week of trading, helping to push up stock indexes in the United States and Europe.

Global markets, particularly U.S. stocks, have gyrated wildly this week as investors grew anxious about the possibility of recession. The S&P is nearly 20% down from its all-time high in January and was close to a bear market on Thursday.

Investors are anxious about whether U.S. Federal Reserve Chair Jerome Powell can accomplish a "soft landing," where the Fed raises interest rates just enough to reduce elevated inflation without causing the economy to contract.

In an interview late on Thursday, Powell said the battle to control inflation would "include some pain," and he repeated his expectation of half-percentage-point interest rate rises at each of the Fed's next two policy meetings. read more

The war in Ukraine has aggravated supply chain disruptions and inflationary pressures already in place after more than two years of the COVID-19 pandemic, but stocks enjoyed a bounce on Friday.

"There's an awful lot of negative sentiment out there, we're looking at a 40% chance of recession," said Patrick Spencer, vice chairman of equities at Baird Investment Bank.

"A lot of fund managers have cut their equity allocations and raised cash, though we think this is a correction rather than a bear market."

China's blue-chip CSI300 index (.CSI300) was up 0.75% and Hong Kong's Hang Seng (.HSI) rose 0.85%, encouraged by comments from Shanghai's deputy mayor that the city may be able to start easing some tough COVID restrictions this month. read more 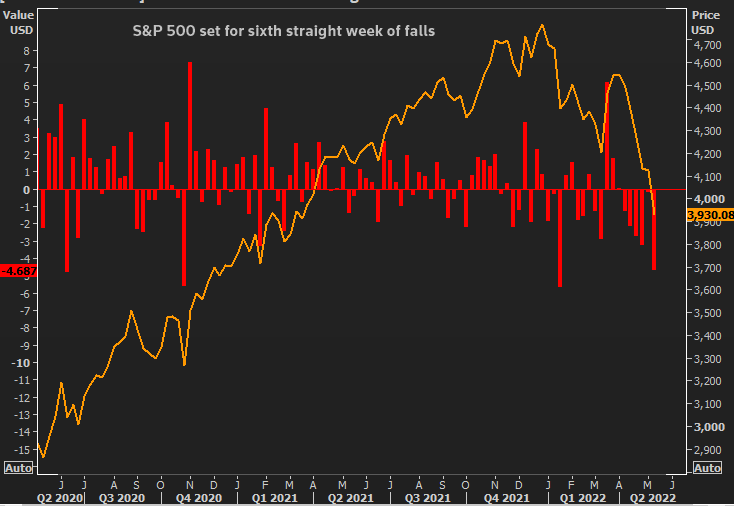 S&P 500 set for a sixth straight week of falls

Markets are likely to experience a short-term rebound before resuming the sell-off which has sent Wall Street's Nasdaq tech index (.NDX) down over 25% since the beginning for of the year, BofA analysts wrote in a weekly strategy note.

Twitter Inc (TWTR.N) shares were down 10% to $40.50 in morning trading on Friday after Elon Musk tweeted that his $44-billion cash deal for the social media platform was “temporarily on hold” pending data on the proportion of fake accounts on the platform. read more

Investors liquidated global equity funds worth $10.53 billion in the week ended May 11, compared with $1.65 billion of net selling in the previous week, according to Refinitiv Lipper. read more

The U.S. dollar was lower at 104.68 against a basket of currencies , but remained close to the previous day's 20-year highs due to safe-haven demand.

Headline inflation in the euro zone will fall in the second half of the year but so-called core prices, which strip out food and energy, will keep rising, the European Central Bank's vice-president Luis de Guindos said on Friday.

Cryptocurrency bitcoin also turned higher, cracking through $30,000 after the collapse of TerraUSD, a so-called stablecoin, drove it to a 16-month low of around $25,400 on Thursday. read more

"Some traders may see the sharp fall this month as an opportunity to buy the dip, but given the hugely volatile nature of the coins, the crypto house of cards could tumble further," said Susannah Streeter, senior investment and markets analyst at Hargreaves Lansdown.

Oil prices rose on Friday but were headed for their first weekly loss in three weeks.

Reporting by Elizabeth Dilts Marshall; Additional reporting by Carolyn Cohn in London and Andrew Galbraith in Shanghai and Dhara Ranasinghe in London; Editing by Jane Merriman and Nick Zieminski
Disclaimer: The views expressed in this article are those of the author and may not reflect those of Kitco Metals Inc. The author has made every effort to ensure accuracy of information provided; however, neither Kitco Metals Inc. nor the author can guarantee such accuracy. This article is strictly for informational purposes only. It is not a solicitation to make any exchange in commodities, securities or other financial instruments. Kitco Metals Inc. and the author of this article do not accept culpability for losses and/ or damages arising from the use of this publication.