May 16 (Reuters) - The S&P 500 ended lower on Monday, with Tesla and other growth stocks losing ground after downbeat Chinese economic data added to worries about a global slowdown and rising interest rates.

However, energy stocks got a lift from optimism that China would see significant demand recovery after positive signs that coronavirus pandemic was receding in the hardest-hit areas. read more

Investors questioned whether a strong day on Wall Street last Friday might signal the end of a recent sell-off that has left the S&P 500 down about 16% from its record high close in January.

"After the big rally on Friday, people are looking around and asking whether it feels sustainable," said Ross Mayfield, an investment strategist at Baird in Louisville, Kentucky. "Does it feel like the momentum thrust you would see coming off of a low, or is there still more of a capitulation to be worked out?"

Many of Wall Street's megacap growth stocks were lower, with Amazon (AMZN.O) and Google-owner Alphabet (GOOGL.O) losing more than 1% and weighing on the S&P 500 and Nasdaq.

Twitter (TWTR.N) fell more than 8% after Bloomberg reported that Elon Musk said a deal to buy the social media company at a lower price than his previously agreed $44 billion was "not out of the question." read more

Investors have been worried that aggressive interest rate hikes by the U.S. Federal Reserve to combat decades-high inflation could tip the economy into a recession, with the conflict in Ukraine, supply chain snarls and the pandemic-related lockdowns in China exacerbating the economic troubles.

Data on Monday showed factory activity in New York state slumped in May for the third time this year amid a collapse in new orders and shipments. read more

Traders are now pricing a near 86% chance of a 50-basis-point hike by the Fed in June. 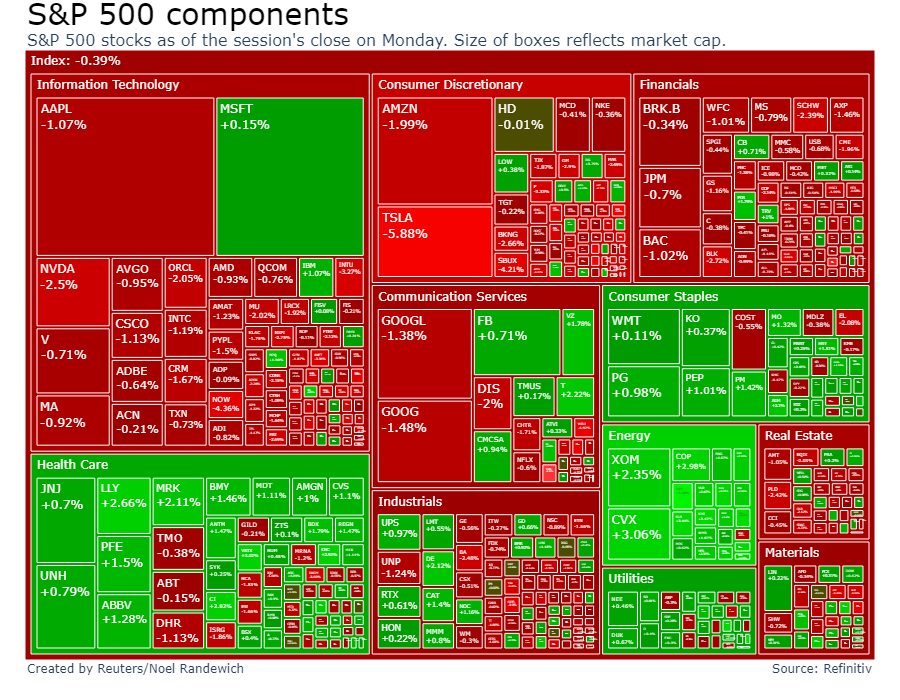 Retailers including Walmart Inc (WMT.N), Home Depot (HD.N) and Target Corp (TGT.N) are due to report their quarterly results this week.

Advancing issues outnumbered declining ones on the NYSE by a 1.08-to-1 ratio; on Nasdaq, a 1.35-to-1 ratio favored decliners.

Volume on U.S. exchanges was 11.3 billion shares, compared with a 13.2 billion average over the last 20 trading days.

Reporting by Amruta Khandekar and Devik Jain in Bengaluru and Noel Randewich in San Francisco; Additional reporting by Devik Jain in Bengaluru; Editing by Shounak Dasgupta and Lisa Shumaker
Disclaimer: The views expressed in this article are those of the author and may not reflect those of Kitco Metals Inc. The author has made every effort to ensure accuracy of information provided; however, neither Kitco Metals Inc. nor the author can guarantee such accuracy. This article is strictly for informational purposes only. It is not a solicitation to make any exchange in commodities, securities or other financial instruments. Kitco Metals Inc. and the author of this article do not accept culpability for losses and/ or damages arising from the use of this publication.