NEW YORK, May 18 (Reuters) - Global stocks plunged and the dollar strengthened for the first time in four sessions on Wednesday as concerns about rising inflation on economic growth soured sentiment.

The mood was underscored by a 9% surge in British consumer prices and a faster-than-expected acceleration in inflation in Canada.

British inflation is now the highest among major economies in Europe, but prices are rapidly rising worldwide, forcing central banks around the globe to hike interest rates and tamp down growth as suggested by a modest decline in U.S. homebuilding in April. read more

Soaring prices and material shortages have already hit homebuilding, the sector of the economy most sensitive to rates. But the U.S. Commerce Department report also showed a record backlog of houses to be built, indicating a decline in homebuilding potentially might be marginal.

Adding to the gloom caused by inflation were earnings results from Target Corp (TGT.N), whose quarterly profit halved as it warned of a bigger margin hit this year due to rising fuel and freight costs. read more

"It was Walmart yesterday and everybody thought it was a one-off," said Dennis Dick, head of markets structure and a proprietary trader at Bright Trading LLC in Las Vegas. "Now that Target misses earning a lot more than Walmart even did, they're scared that consumer is not as strong as everybody think it is."

The declines for the S&P 500 and Dow marked their biggest one-day percentage declines since June 11, 2020.

Few analysts are willing to predict the end to selling after a bruising first five months of the year for risk assets given the magnitude of macroeconomic uncertainty, with many anticipating market volatility will be the norm for some time.

The U.S. dollar gained ground as the sell-off in risk assets boosted the safe-haven appeal of the greenback, which was on pace to snap a three-session losing streak, a day after Fed Chair Jerome Powell pledged the U.S. central bank would ratchet up rates as high as needed to combat rising inflation.

Treasury yields fell, although a steep path for rates remained the prevailing market consensus as the benchmark 10-year note yield hit a one-week high of 3.015% after Powell's hawkish comments.

The yield fell 8.1 basis points to 2.890% on Wednesday after a soft U.S. housing starts number.

The German two-year government bond yield shot to 0.444%, its highest since November 2011 after more hawkish central banker comments, and last was up 1.6 basis points at 0.386%. The European Central Bank's Klaas Knot said on Tuesday that a 50-basis-point rate hike in July was possible if inflation broadens.

Gold prices were little changed despite the risk-off environment as looming U.S. interest rate hikes and a resurgent dollar dimmed the metal's shine. 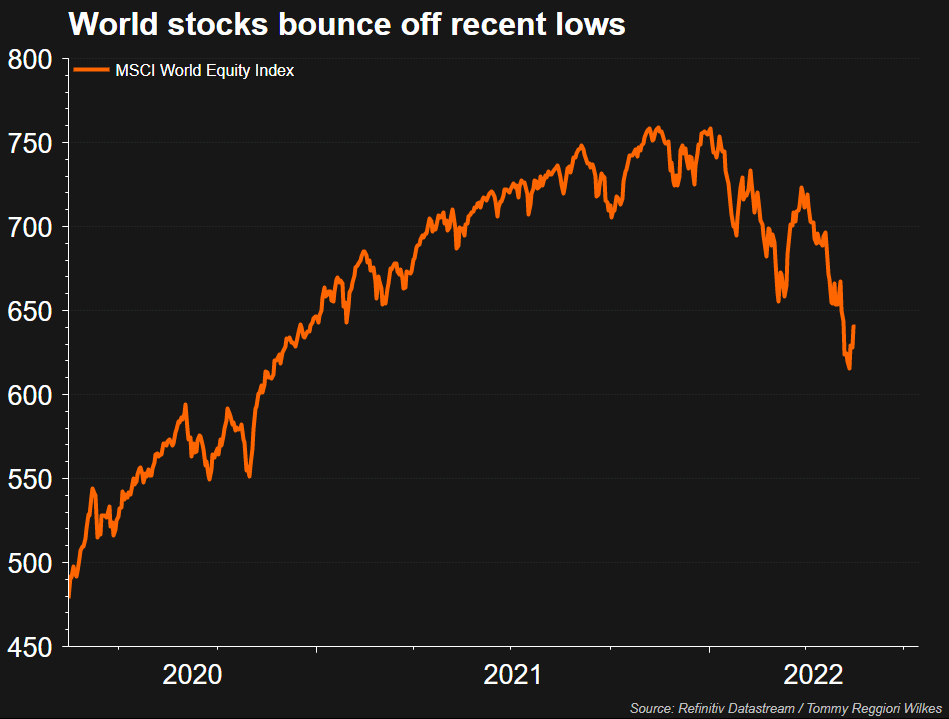 MSCI World equity index
Reporting by Herbert Lash and Chuck Mikolajczak; additional reporting by Devik Jain in Bengaluru; editing by Jonathan Oatis
Disclaimer: The views expressed in this article are those of the author and may not reflect those of Kitco Metals Inc. The author has made every effort to ensure accuracy of information provided; however, neither Kitco Metals Inc. nor the author can guarantee such accuracy. This article is strictly for informational purposes only. It is not a solicitation to make any exchange in commodities, securities or other financial instruments. Kitco Metals Inc. and the author of this article do not accept culpability for losses and/ or damages arising from the use of this publication.