Gold's big $1,800 test on the radar next week as stocks' steep selloff intensifies 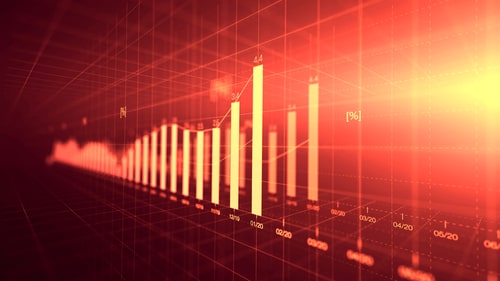 (Kitco News) With the U.S. stock market still at risk, should gold be trading higher? Analysts see next week as an important test for gold as markets debate the effects of the Federal Reserve's oversized hikes.

Gold is ending the week with its first weekly gain in five weeks as the precious metal finally saw renewed safe-haven demand on concerns over inflation and economic growth. June Comex gold futures were last trading at $1,841.40, up 1.8% on the week.

Going into next week, the steep selloff in the equity space might not be over as the S&P 500 is now 20% below its all-time highs posted in January.

"During the last few weeks, we saw the stock market selling off and gold going along with it. But then we got a short-term peak in Treasury yields, which opened the door for gold to behave as a safe haven," OANDA senior market analyst Edward Moya told Kitco News. "The U.S. stock market is still at risk. We could see one last major plunge. And we'll probably see gold's safe-haven [properties] being tested once more. Selling exhaustion should be settling soon."

If that is not the case, the Fed would be forced to step up its already aggressive tightening schedule, Shenfeld noted. "That's the one-two punch that the equity market is now fretting over: higher rates that lower equity multiples, coupled with a recession that crushes earnings. If, instead, a smaller dose of Fed medicine, and consumer resistance to higher prices, brings an earlier cooling, the recession risks would be significantly diminished," he said.

"Markets are having to reprice Fed's outlook on rates. There is doubt that 50bps at this level of inflation would be enough. If the Fed's 75bps hike is readjusted again, it will be a headwind for gold. Gold is stuck sideways as we wait for that story to flash out," Boutros told Kitco News.

The idea that the Fed is making a policy error by acting too slow is becoming more common, he added. "They need to slam on the break and accelerate rate hikes even faster. At this point, they are already late," Boutros stated.

This is why gold is in a tough spot and could be at risk of a further selloff below the $1,800 an ounce level, especially if there is a close below the $1,791 level.

"With what we are seeing in the equity market, you would expect gold to catch a bid. We did this week, but the rally was unimpressive. From a technical standpoint, we are at risk of testing the lows. The $1,781 level or deeper is still on the table," Boutros noted.

Investors should gear up for a sideways price action until gold can move above the $1,895 an ounce level, he pointed out.

Moya was more optimistic looking further out, with economic growth concerns remaining one of the main stories for the rest of the year. This narrative should weigh on the U.S. dollar index, which has been recently trading near 20-year highs and limiting gold's upside.

"We've seen weaker economic data in the U.S. this week. Even jobless claims went up. All expectations are for data to deteriorate. There should be some pullback for the dollar," he said. "It should be good news for gold. We should see gold hold $1,800 through the next week. But more downside movement in equities could break that."

Moya sees the Fed slowing down once financial conditions tighten enough and credit spreads widen. And this should not be too far out in the future.

"That's starting to happen. If the stock market drops another 5% lower, volatility will spike higher, and credit markets will force the Fed into a less hawkish stance of 25-basis-point hikes. And that's not too far away. It should be good news for gold," Moya said.

Next week's key data releases are flash PMI and personal spending. "Consumer spending is projected to weaken. The FOMC minutes are likely to be dated as we already heard Fed Chair Powell and other FOMC members after the May meeting. Flash PMI will be important, especially if we start to see if data get closer to contraction territory," he outlined.